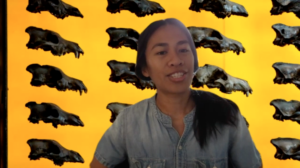 My name is Mairin Balisi, I am a co-author on this paper, along with the lead authors Dr. Haowen Tong, at the Institute of Vertebrate Paleontology and Paleoanthropology in Beijing, and Dr. Xiaoming Wang, who is here at the Natural History Museum of Los Angeles County and is the curator of Vertebrate Paleontology. I am a post-doctoral research fellow in Los Angeles at the La Brea Tar Pits Ed Museum, which is also part of the Natural History Museum. 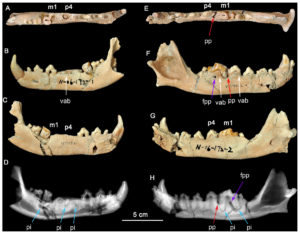 The paper is titled “Hypercarnivorous teeth and healed injuries to Canis chihliensis from Early Pleistocene Nihewan beds, China, support social hunting for ancestral wolves“ . C. chihliensis is believed to be an ancestor or early relative of the Grey Wolf from early Pleistocene Nihewan beds in China. This early wolf relative has hypercarnivorous teeth, which are teeth that are adapted for slicing meat and also crushing bone.

C. chihliensis were found with not only having these teeth but also specimens were found with healed injuries. For example, we have jaws that clearly show that this animal was crushing bone and we also have a shinbone from this animal that shows that it was fractured and healed. In the fossil record, when you see evidence of healing, we interpret that as the animal continued to live after it was critically injured.

The logic from there is that if this was an active predator that needed to hunt to survive and to feed itself, and this injury was incapacitating enough that it probably could not hunt for a significant amount of time, that it must have been getting by with some help from its friends or family, or what we call social hunting.

Can you tell us more about La Brea Tar Pits and the Natural History Museum?

La Brea Tar Pits is an active fossil deposit. By active I mean it is actively trapping to this day and also actively being excavated. La Brea means tar in Spanish and so that describes the depositional environment that we have. We have asphalt seeps, where asphalt seeps up out of the ground and pools on the surface, and over the last 50 thousand years or so that has entrapped thousands and thousands of animals of all different sorts, including mammoths and mastodons, for example, and predators like sabre tooth cats and dire wolves.

Each one tells a slightly different story about how the wolf used to live and how the environment was, meaning at La Brea we have enough specimens that we’re able to study things here that are not easily studied elsewhere. That includes phenomena like pathology, such as injuries that are preserved on the bone. We have a good record of pathologies, for example, from the dire wolf, and in a previous paper colleagues and I found that the dire wolf wasn’t getting hurt a lot, but when they were getting hurt they tended to be injured in the legs and in the feet, and this confirmed for us what previously hypothesised about how dire wolf hunt.

There is often a contrast between the sabre-toothed cat and wolf, the sabretooth being an ambush predator (or being inferred to be ambush predator) and the dire wolf being inferred to be a pursuit predator. We saw a lot of fractures in the shin bones that are similar to the fractures found in C. chihliensis that we describe in this paper. In addition to the limb fractures we also saw a lot of fractures and signs of infection in the lower jaw of the dire wolf, that we interpret to be from bone-cracking because they happened to be in that part of the jaw that suffers the maximum impacts from bone cracking – again, similar to C. chihliensis. So that was cool to us that we could know the fossil record shows these similar patterns in two different species, closely related, but from different points in time – a difference of a million years and then also different continents, but just shared ancestry and shared behaviour.