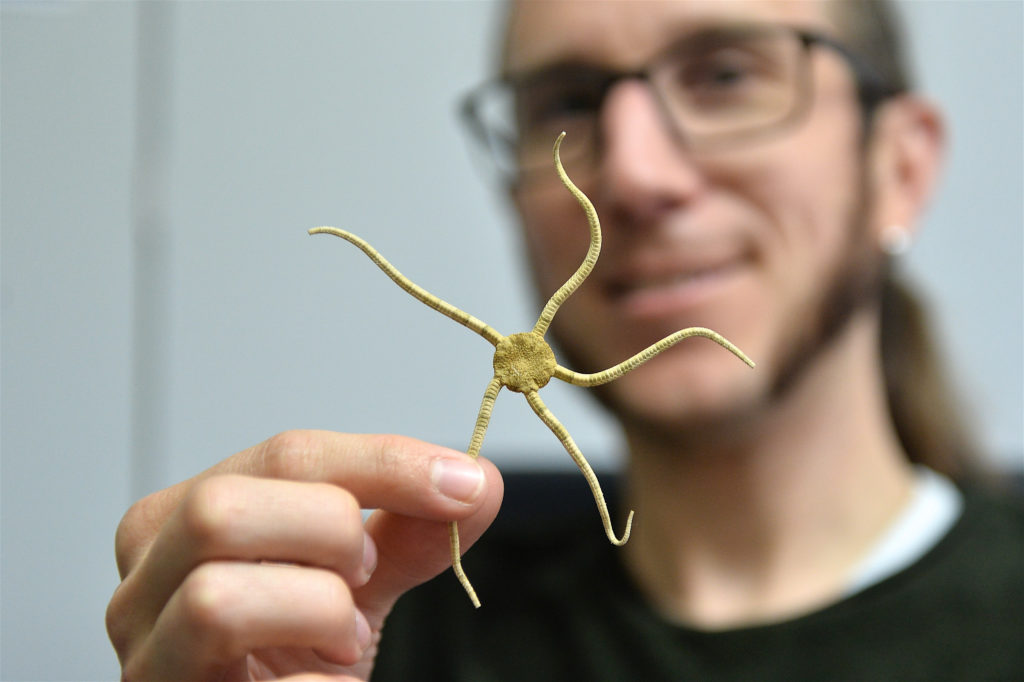 Palaeontologists from the Natural History Museums in Luxembourg and Maastricht have discovered a previously unknown species of brittle star that lived in the shallow, warm sea which covered parts of the present-day Netherlands at the end of the Dinosaur Era. The starfish-like creature was unearthed more than 20 years ago but has only now been identified as new to science. The name of the new fossil pays tribute to Dutch metal vocalist Floor Jansen, in recognition of the mutual inspiration between science and music.

Like so many exciting discoveries, the new fossil species had long passed unnoticed. Here we talk to co-authors of the paper ‘A new ophiacanthid brittle star (Echinodermata, Ophiuroidea) from sublittoral crinoid and seagrass communities of late Maastrichtian age in the southeast Netherlands‘, Dr Ben Thuy and Dr Lea Numberger, palaeontologists at the Natural History Museum in Luxembourg, and Dr John Jagt, palaeontologist at the Natural History Museum in Maastricht to find out why?

Ben Thuy: I work as a palaeontologist at the Natural History Museum in Luxembourg. My research focuses on the evolution and fossil record of echinoderms. Brittle stars, the slender-armed cousins of the starfish, are my favorite group because they can be used as a powerful model organism to explore large-scale trends in the evolution of ocean ecosystems. In addition, the palaeo-biodiversity of brittle stars is still poorly known, making them an exciting scientific playground for new discoveries. Fossils rock, no question, but whenever studies are stuck and harsh reviews come in, I blow off steam as the drummer of my metal band Sleepers’ Guilt.

Lea Numberger: I am a research associate at the palaeontology department of the Natural History Museum Luxembourg. My first research projects dealt with foraminifera, microfossils commonly used as ecological and geochemical proxies in palaeoclimatology. My interest in echinoderms arose when a set of samples yielded a significant amount of weird microfossils that turned out to be remains of sea urchins, brittle stars and starfish. Since then, I use my experience in micropalaeontology to explore the fossil record of echinoderms, and my passion for rock music to coin inspiring species names. 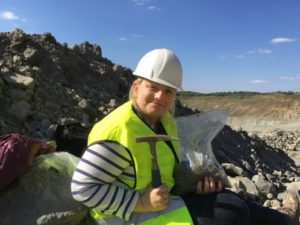 John Jagt: I have been employed as curator of palaeontology at the Natural History Museum of Maastricht since January 1991, and my main research interest is in invertebrate and vertebrate fossils of the type Maastrichtian, just a few kilometres to the south of the city. Frankly, I consider myself to be a 19th-century scientist, in that I enjoy working with all faunal groups, from crustaceans (cirripedes, lobsters and crabs), to molluscs (ammonites, belemnites, bivalves and gastropods), trace fossils and, of course, echinoderms. The last-named group featured prominently in my PhD thesis (May 2000). On an everyday basis, I work together with a dozen or so amateur palaeontologists, from all walks of life.

Ben Thuy: My co-authors and I describe a new species of fossil brittle star, Ophiomitrella floorae, that belongs to a group rarely found in the fossil record. It lived in the shallow, warm sea which covered parts of the present-day Netherlands at the end of the Dinosaur Era. The new species is exciting because its living relatives are found in the deep sea, implying a major distribution shift since the latest Cretaceous. Furthermore, O. floorae lived with and probably even clung to sea-lilies; stalked, flower-like echinoderms that also became restricted to the deep sea during the past million years. 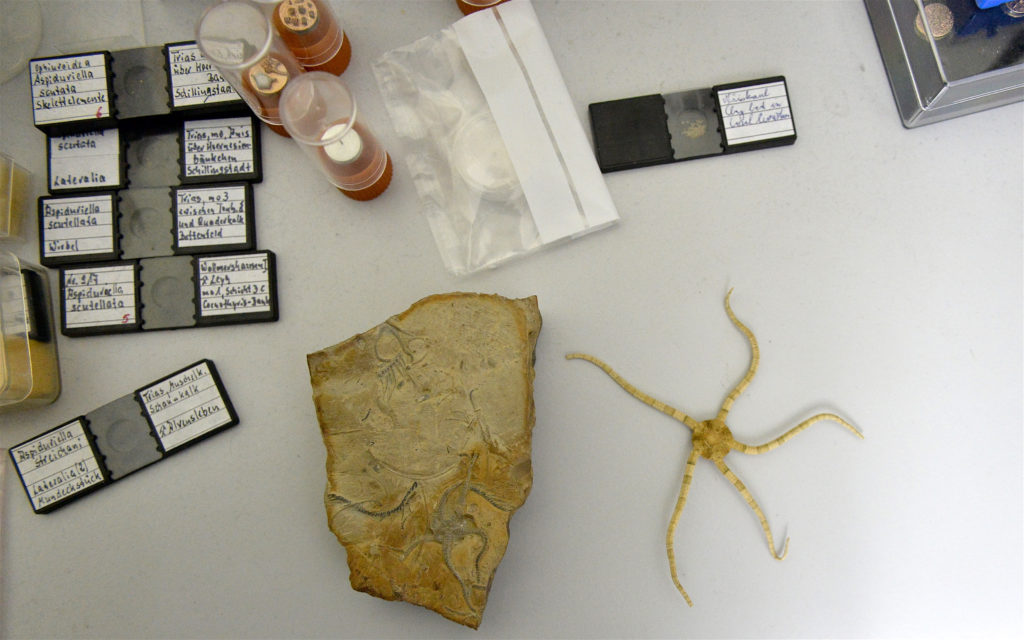 Ben Thuy: The most obvious anecdote is the name of the new species. Whenever scientists discover a new species, they have the privilege to name it. My co-authors and I decided to combine our common passions for fossils and rock music, and named our new species of brittle star after Dutch vocalist Floor Jansen. While some colleagues may feel mildly annoyed by such unorthodox species names, we enjoy the fun of bringing together two seemingly disparate worlds and add some spice to the otherwise rather dull process of describing species.

John Jagt: I agree with Ben here. When I met up with Floor at a concert hall in Tilburg (the Netherlands), just before she went on stage to do her gig, it turned out that she was intrigued by fossils and actually knew a lot about the area and the rocks that had yielded the new brittle species to be named after her. That is a real thrill – to join two very different worlds, with the help of a 66.7-million-year-old spiny-skinned animal. 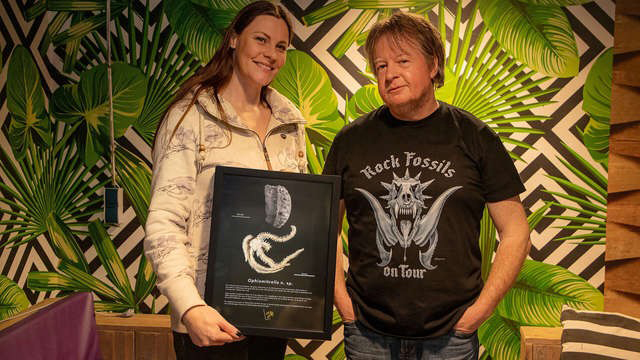 Ben Thuy: Our discovery was based on fossil material that has been housed in the collections of the Natural History Museum of Maastricht for more than 20 years. This shows that museum collections are not only archives of biodiversity but also invaluable treasure chests for new discoveries.

Lea Numberger: We hope that readers find pleasure in the name of the new species, and we emphatically encourage peer researchers to choose inspiring names for their discoveries, not only to the benefit of science communication.

John Jagt: Well, I can be brief here – that there is still a lot to be discovered, despite the fact that people have been collecting from the Cretaceous strata in the Maastricht area for well over 250 years. Keep your eyes peeled and make sure that you have a list of potential names to name the new species at the ready!

Ben Thuy: When I read a paper published in PeerJ for the first time, the layout immediately caught my attention. Publishing conditions and the advocacy for open access eventually persuaded me to submit to PeerJ.

Ben Thuy: Publishing with PeerJ is great because 1) the submission is a straightforward and rewarding experience, 2) editorial staff and academic editors are responsive and helpful, 3) the review process is rigorous but fair, and astonishingly quick, 4) press and social media experts are outstandingly committed and pleasant to work with. Therefore, my response to the next question:

John Jagt: I second that, wholeheartedly.

Thank you for sharing your research journey, Ben, Lea and John. Read the full paper here
You can hear more about the research process on our YouTube Channel interview with Dr Ben Thuy.