A Movement for Change: #BlackBirdersWeek

#BlackBirdersWeek took place across social media platforms last week as an initiative by a group of Black scientists to celebrate Black birders, and affirm the rights of Black naturalists to be in nature without having to face racism. The inaugural event was founded in response to a viral video showing a white woman making a call to the police in response to Black birder, Christian Cooper, asking her to keep her dog on a leash in Central Park’s Ramble area (a protected woodland area, where dogs are required to be leashed at all times).

Here Alexi Grousis-Henderson, Atiya Wells and Juita Martinez from the group behind the initiative tell us more about launching the first event, an overview of the activity, and their plans for the future.

Why was Black Birders Week started?

Black Birders Week was formed out of our shared experiences of racism while being Black outdoors. Central Park sparked an intense conversation where many, if not all members of the #BlackAFinSTEM group could identify at least one moment similar to the one seen on the infamous video. Out of this Black pain the group sought to build Black joy. The plan became to amplify Black birders and naturalists’ voices; to show the public the Black community utilizes outdoor spaces, too.

There exists a large disparity in the number of White and Black individuals in the birding community and in the environmental community at large. The last available numbers from a study by Green 2.0 of 191 environmental non-profits, 74 government environmental agencies, and 28 leading environmental grant-making foundations found that only 12% of leadership roles in NGOs are occupied by BIPOC; as a subset, Black people occupy an even smaller percentage than this. One of the long-term goals of group members is to increase these numbers both at the top and bottom of those hierarchies. Black Birders Week is a way for us to show we exist and to demand the acknowledgement of our non-Black counterparts.

“We wanted to draw on what we know about the diversity of biological systems and bring that perspective to social systems,”  Grousis-Henderson says. “A diverse ecosystem can stand up to a lot of change, but a non-diverse ecosystem, one lacking biodiversity, is easy to topple.” Read more here 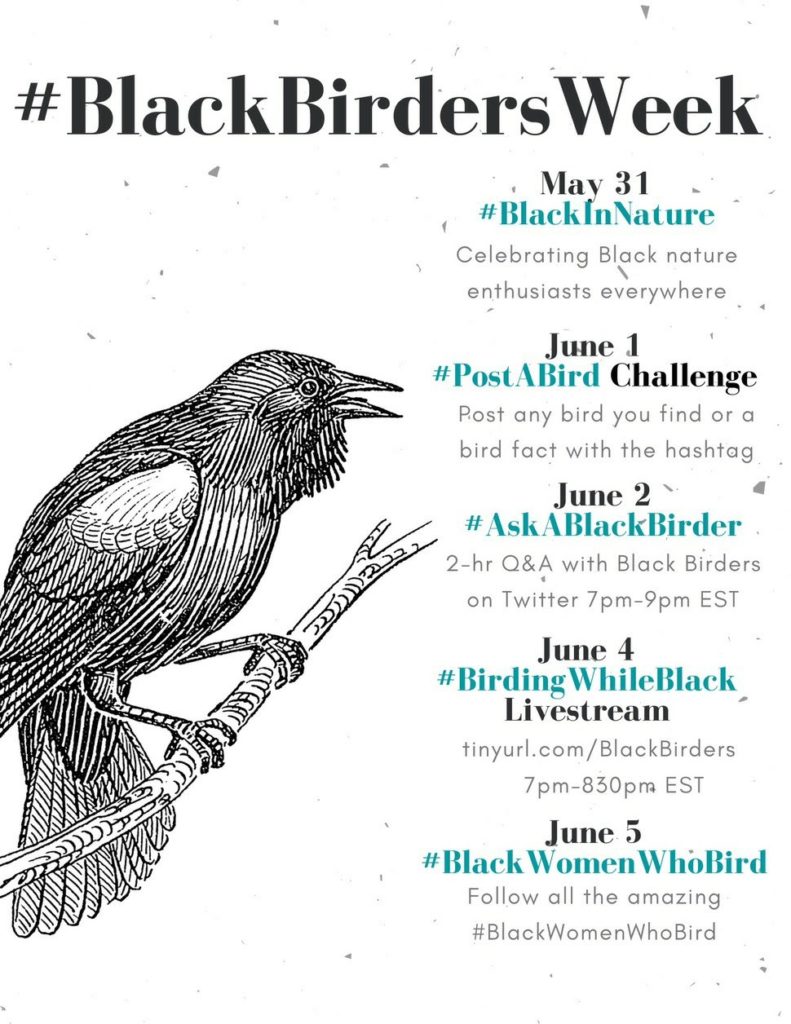 Can you give us an overview of the week’s activity?

On 5/31 our event began with #BlackInNature, where we invited Black people to showcase themselves engaging in their field of study or enjoying themselves outdoors.

“I was used to the loneliness of being the only Black person in the room at environmental workshops, and then I was invited to join the BlackAFinSTEM group last year. It felt like attending my first family reunion. Scrolling through the Black In Nature hashtag, and seeing Black people from all over the world sharing and uplifting their work in the outdoor sector…I can’t even begin to describe the emotions.” – Pediatric Nurse Atiya Wells, Founder and Executive Director of Backyard Basecamp in Baltimore, MD. 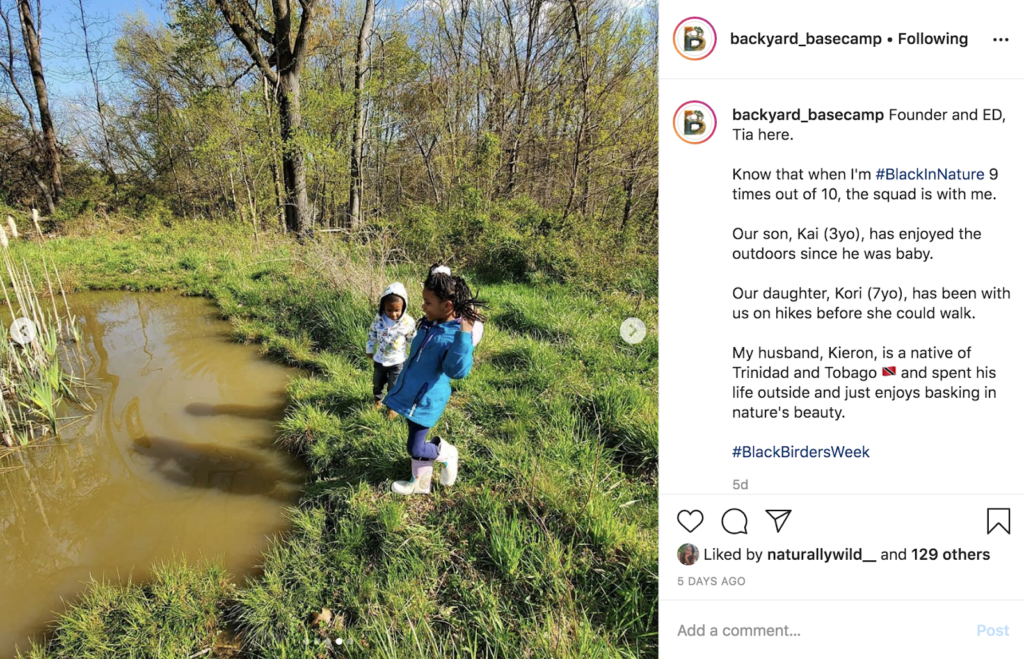 On 6/1 – #PostABird where we encouraged people to share pictures, facts, and stories about birds using the hashtag.

On 6/2 – #AskABlackBirder where the audience had the chance to ask their burning questions, and members from the BlackAFinSTEM group answered. We also hosted an Instagram LIVE with other co-organizers and answered questions there.

On 6/4 – Our main event #BirdingWhileBlack. This was a two-part live event in which birders from our group “sat down” with Christian Cooper and Drew Lanham to chop it up, swap stories, share our experiences with the audience, and to answer folk’s burning questions. 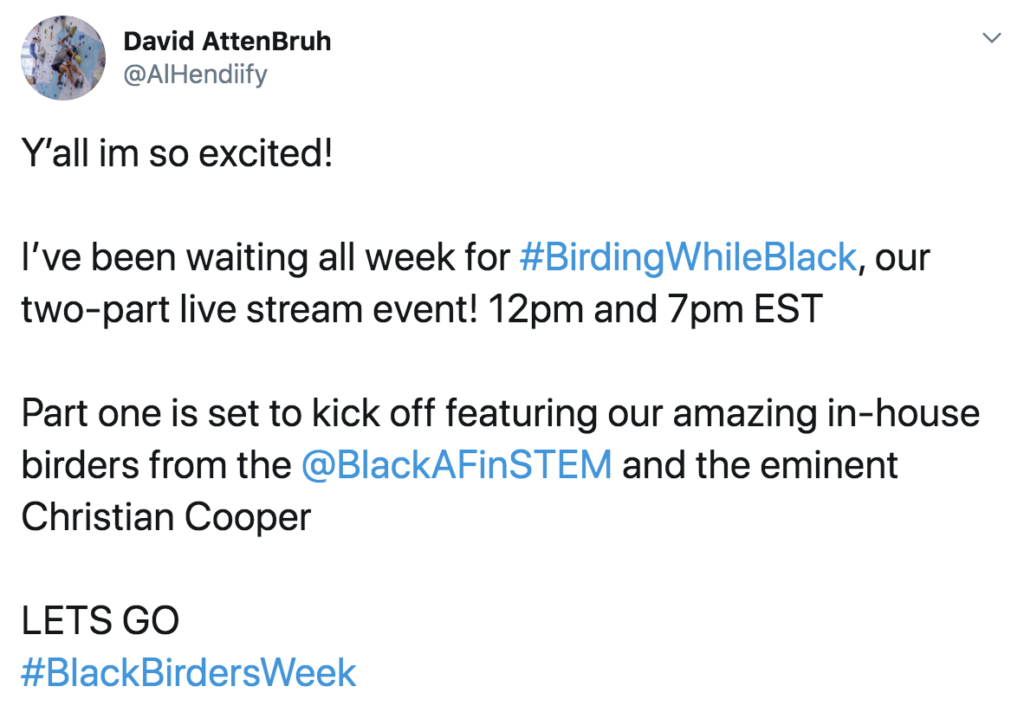 On 6/5 – The anchor #BlackWomenWhoBird. Without the work of Black women, this event would not have happened. The ideas, the organizing, the art; all of it is a product of the irreplaceable competencies of the Black women within this group. This day was in celebration of them and all other Black women who bird, nerd out, and otherwise love the natural beauty of this world.

“Black female birders and Black women in general lack accreditation, whether that is from their place of employment or in a hobby such as birding,” – Juita Martinez 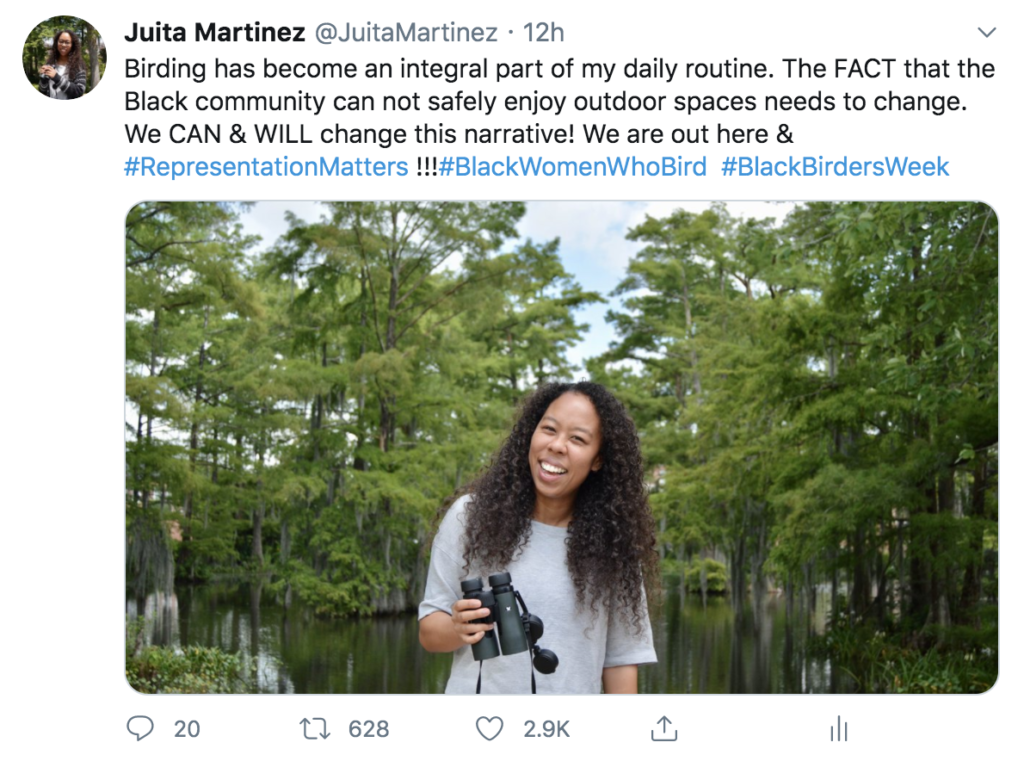 What are your initial reflections on the growing community?

Prior to this event #BlackAFinSTEM group members were in a relatively small bubble, mainly following each other on social media. We were excited to have even found each other in the first place, we never fully encompassed how many others were out there as well. When the event began gaining momentum it started feeling like a world-wide mixer! It was like meeting kids from other schools, but they were all Black – something that most of us had never experienced before. The energy was hype!

The group had high hopes but wasn’t expecting it to become as big as it has. Some of us had flimsy connections to journalists or writers, reaching out with requests to help support our vision. Within 72 hours we were overwhelmed with requests for interviews. Our social media feeds have been filled with love and good energy. The overwhelming amount of support really kept us busy, booked and overjoyed!

What are your plans for the future?

This is a movement that is just beginning. While this week has been one filled with joy and excitement it also has been an emotionally exhausting week. Organizing this event has been done between the “free time” of our lives, between school, work, and home life. Even more of this labor/work has been done for free. This is something that many in the Black community experience on a daily basis and for our entire lives. Much of our future depends on funding and support. Pending funding, many ideas include Black Birders Week in 2021, highlighting Black people in different fields such as herpetile (reptile and amphibian) professional and amateur enthusiasts, professional development of our members, outreach, networking events, and so much more. This is the seed that grows into a mighty live oak, we just need a little water and room to grow.

How you can aid in the mission of BlackAFinSTEM is to amplify the voices of Black scientists and civilians; demand an agenda of anti-racism from local, state, and federal leadership; and for our supporters to stand up when they see racism, no matter how minor it might seem.

We thrive in solidarity.

Thank you, Alexi, Atiya and Juita for sharing the Black Birders Week story so far with us!