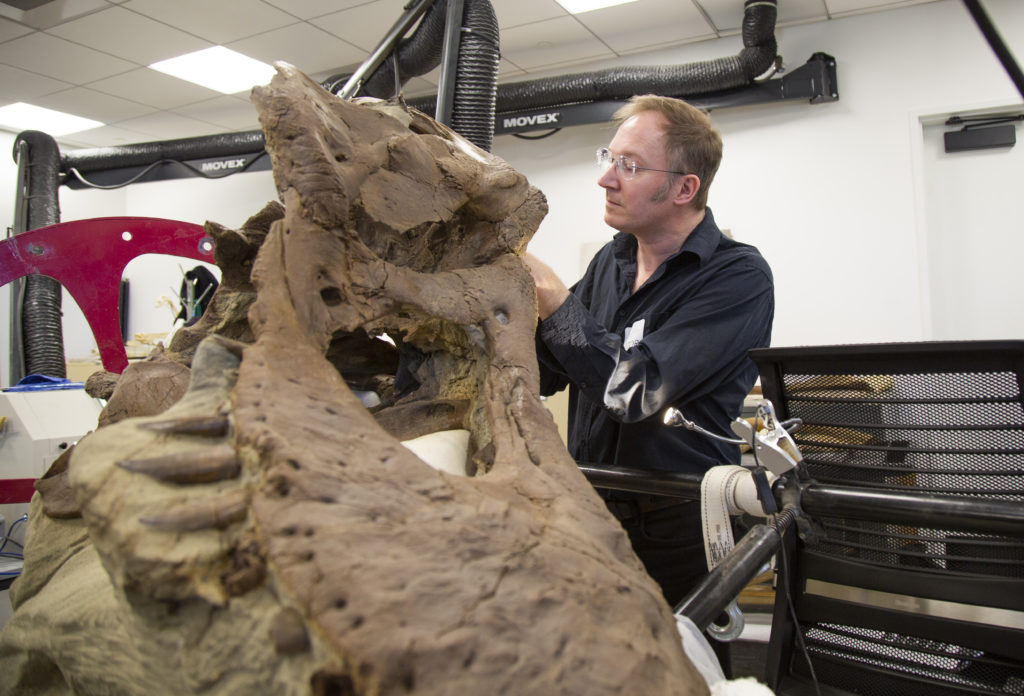 ‘The main thrust of this work is to discover the developmental underpinnings of evolutionary change, and my results of growth in Tyrannosaurus rex is to serve as an exemplar of that sort of study. The main challenge faced by vertebrate paleontologists is the deficit of high-resolution growth series based on as many lines of evidence as possible. Every part of the skeleton changes with growth, and very few studies make the attempt to capture all that is happening.

This is important because many growth features are also phylogenetic (evolutionary) and in many cases young T. rex express the ancestral condition whereas adults express the descendant condition; that’s where the connection between growth and evolution comes into play. In some cases the growth transition can be informative regarding how evolutionary changes came about. Also, those data can be used to test the notion that “ontogeny recapitulates phylogeny” (i.e.., growth replays evolution) on a detailed, feature-by-feature basis. Finally, the major growth trends of T. rex can be compared with those of other bird-line reptiles (archosaurs) to identify which trends were inherited from their common ancestor and which evolved later.

My study of T. rex was a long-overdue update to a study that I published back in 2004; that growth series was small and limited: it included only five specimens and 84 growth-variable features from only the skull, jaws, and teeth. The present study has been expanded to include 31 specimens and 1,850 features from the entire skeleton; this study provides a much more complete picture of growth in T. rex.

My study of growth in T. rex is based on cladistic analysis, a method that can use many independent types of data (e.g., such as age, maturity, and size) to recover a high-resolution growth series. Many growth studies of dinosaurs and other extinct animals are based on size alone; we know that size and maturity do not reliably covary, and such growth series have a high probability of mistaking a large subadult for an adult, and a small adult for a subadult. For example, my results found that Scotty, the largest T. rex currently known, is really a young adult and not the oldest T. rex as it was once thought, a conclusion that was primarily based on size. Cladistic analysis has the advantage of including all relevant developmental data to recover a growth series that is more accurate than one based on only one or two lines of evidence.

Cladistic analysis was originally developed for recovering evolutionary relationships between species, but it can recover patterns of other hierarchically nested phenomena like growth. The advantage for studies of growth is that the relative maturity of individual specimens can be identified, thus avoiding the vague categories of “juvenile”, “subadult”, and “adult”; also, cladistic results allow growth categories to be defined with precision. The method is powerful in that it can be applied to any organism, not only dinosaurs such as T. rex. Once obtained, a high-resolution growth series for one species is the starting point for a much larger project: the comparison of growth series of closely related species to identify how growth was modified from ancestor to descendant, paving the way for identifying the evolutionary processes that produced the diversity that we see in the fossil record and the modern world.

This study is a deep dive into variation of T. rex, but there are a few salient takeaways. A major concern of vertebrate paleontologists is sexual dimorphism, whether or not male and female skeletons are recognizably different from each other. I found no evidence for sexual dimorphism in T. rex, which is consistent with studies of other species of dinosaurs; at the level of bones and teeth, male and female dinosaurs simply look alike.

Another key result is that size and mass are unreliable proxies for age among adult T. rex; for example, the largest and most massive T. rex is not necessarily the oldest, nor is the smallest and leanest adult necessarily young.

Juvenile specimens that are considered by some workers to be a pygmy tyrannosaur called “Nanotyrannus” do not group together in the growth series, as would be expected if they were a different species from T. rex. Instead, they form a transition between the smallest juveniles and the bigger and more mature subadults, showing that the “nanomorphs” are not all that similar to each other and instead form an important bridge in the growth series of T. rex that captures the beginnings of the profound change from the shallow skull of small juveniles to the deep skull that is seen in fully-developed adults.

The growth series of T. rex shows that the greatest number changes occur between the juvenile and subadult growth categories, transforming the skull from long and low to deep and powerful, which occurred in as little as two years or less. This type of wholesale change is termed secondary metamorphosis and it is similar to the extreme changes that are seen in spawning salmon. Like salmon, it is possible that this profound and permanent change of the skull and jaws corresponds to sexual maturity, which is characteristic of secondary metamorphosis. As such, the hallmark powerful skull and thick teeth that we associate with T. rex happened halfway through life, at 15 years old.

This study provides a context for future work on the paleobiology of T. rex and it provides a firm foundation for the study of the evolution of growth in tyrannosaurs, a project that currently I have in progress. Publishing in an Open Access journal ensures that the results and data are available to everyone, which serves the pragmatic purposes of dissemination and satisfies the ethical concern of access to science by underserved communities.’

Thank you for sharing your research journey, Thomas! You can read his monumental T. rex paper here