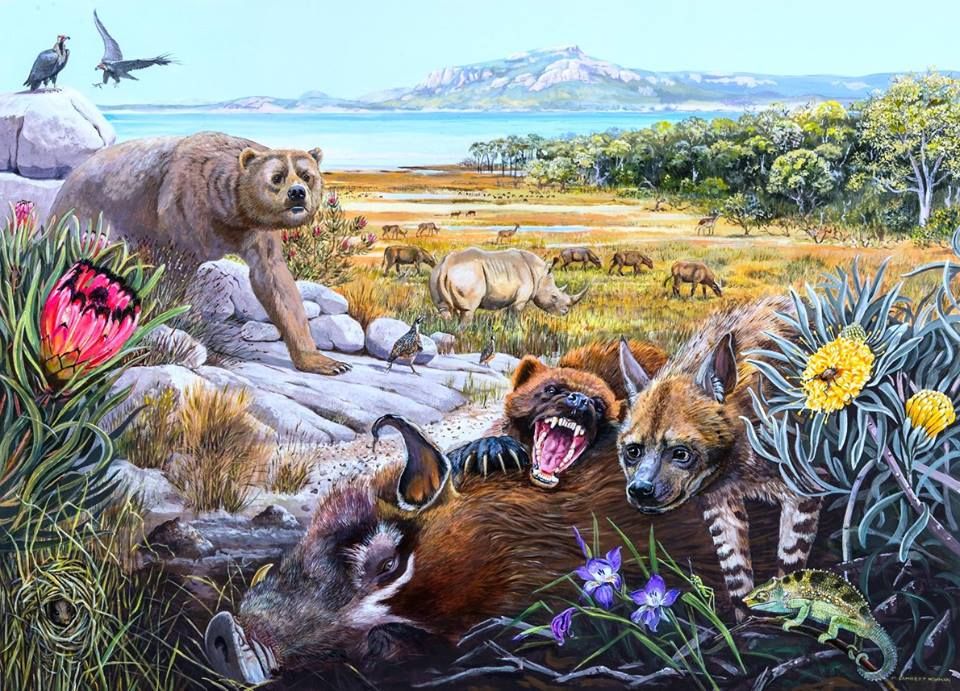 The research by scientists at Iziko Museums of South Africa and the University of Cape Town shows that 5 million years ago, wolf-size otters and leopard sized relatives of the living wolverines lived along the West Coast of South Africa. Here we talk to author Alberto Valenciano about the research and publishing process. 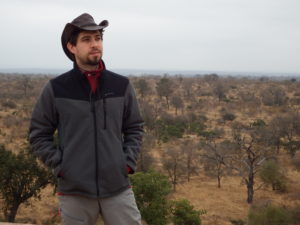 I am a vertebrate palaeontologist from Spain, specialized in faunas of carnivorans from the Neogene of Eurasia, North America, and Africa. I did a 2-year Postdoctoral Fellowship with the Centre of Excellence in Palaeosciences (CoE-Pal) and member of the Iziko Museums of South Africa (Cape Town) and the University of Cape Town till last April. Now, in a couple of months, I will start a new Postdoc at University of Zaragoza (Spain).

My research mostly focuses on taxonomy, systematics, and paleobiology, focused on the evolution of canniformia carnivorans (mustelids, mephitids, ailurids, canids, amphicyonids, and ursids), with special attention to faunas of Eurasia (Spain, central Europe and China), Turkey, North America and South Africa. However, I also work with other Neogene families such as felids, herpestids and viverrids from the same regions.  In relation to the fieldwork, I have 15 years of experience working in Miocene and Pliocene localities of Spain, North America, Turkey and South Africa.

The analysed fossils come from the paleontological site of Langebaanweg, ‘E’ Quarry from sediment dated from the early Pliocene ~5.2 million years ago (Ma). It is located on the west coast of South Africa, 120 km north of Cape Town, and has yielded one of the richest and best-preserved Neogene mammal assemblages in Africa, and possibly in the world. 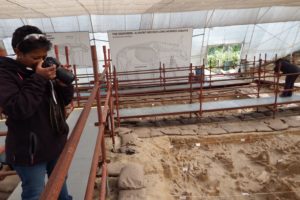 The fossil deposits were discovered during phosphate-mining operations which spanned the late 1950s-1980s under the leadership of Brett Hendey from Iziko Museum of South Africa. Since then, more than 230 species of marine and terrestrial animals have been found. Carnivores mammals (carnivorans) are quite common in the locality and have become a world reference for palaeontologists, containing a minimum of 20 different species of primitive and modern archaic Mio-Pliocene mustelids, bears, seals, jackals, hyenas, saber-tooth cats, giant civets and mongoose. Herein, we describe the teeth and forelimb and hindlimb skeletons of a wolf-sized otter (Sivaonyx hendeyi) and the leopard-sized relative of the living wolverine (Plesiogulo aff. monspesulanus). They are mustelids, a family of carnivorans that include weasels, otters and badgers among others, and represent the first mustelid specimens described from Langebaanweg in more than 40 years.

Our work has led to important new data about the locomotion and diet of the rather poorly known giant otter, Sivaonyx hendeyi, that is unique to Langebaanweg. In addition, we confirm that Langebanweg´s wolverine, Plesiogulo aff. monspesulanus is a different species to that of the large-bodied Plesiogulo botori from the late Miocene of East Africa (Kenya and Ethiopia). 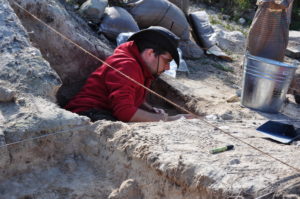 I joined Romala Govender (Curator of Cenozoic palaeontology at Iziko Museum of South) for digging at Langebaanweg in 2018 and 2019. After a lot of fun and work through these two seasons, we didn’t find any mustelid bone! The funny thing is that I used to dig in July in Spain (summer in the North Hemisphere), which means dry and very hot weather. In this time, we dug also in July, but in South Africa (winter in the southern hemisphere), the weather was cold and sometimes rainy, which is unusual for me. However, this publication was possible because I checked hundreds of ancient boxes from the 1970-1980´s field season of Hendey, housed in the collections at Iziko. Somehow, I had to dig in the collection, to find unsorted new material, and it worked!

It was very good and pleasant, especially because of this Covid-19 pandemic mad situation.  I submitted it on February 21st and it was accepted April 29th. So, the paper was published in a bit more than 3 months. I have to say THANKS to all the people that worked in that process including PeerJ staff, academic editors and reviewers, because all of them worked in a very professional and effective way during this very strange situation, with the whole planet in quarantine.

Thanks for sharing your research story, Alberto! You can read his full paper here.