How does variation in rate and mode of evolution of different anatomical regions affect phylogenetic analyses of mammals? Author interview with Neil Brocklehurst and Gemma Louise Benevento

Here we talk to the authors about their research journey, the issues with reconstructing mammal phylogenies from fossils, and their experience with publishing in PeerJ.

Neil Brocklehurst – I am a DFG research fellow at the University of Oxford, working with Professor Roger Benson on the early evolution of herbivores. My research focus is on the processes and patterns underlying evolution, usually in Paleozoic terrestrial vertebrates, but also in a variety of other groups like mammals, birds and lizards.

Gemma Louise Benevento – I am a postdoctoral researcher at the University of Birmingham in Professor Richard Butler’s Lab. I specialise in mammal macroevolutionary patterns and processes and currently work on patterns of mammal diversity across the Cretaceous/Paleogene boundary. I have worked on mammal macroevolution across the K/Pg since my PhD, where I quantified Mesozoic and Cenozoic mammal jaw morphological diversity. Neil and I met during my PhD, while we were both in the Earth Science Department at Oxford. 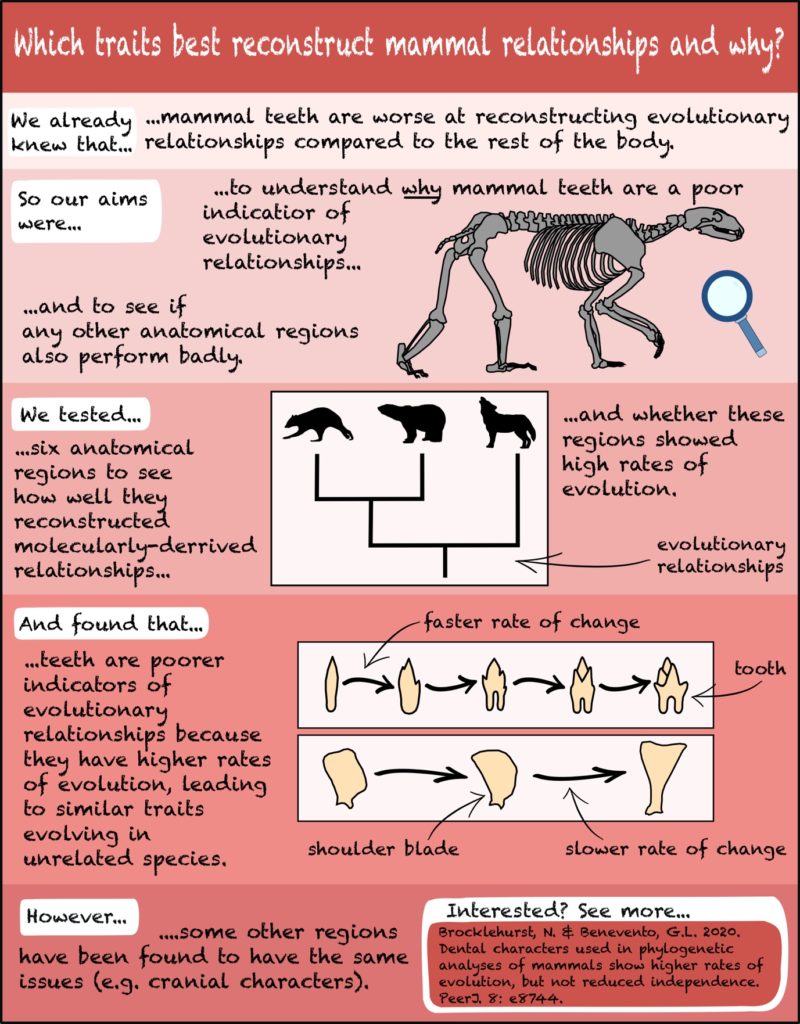 To reconstruct the evolutionary relationships of past mammals, palaeontologists use morphological characters preserved in the fossils. However, research published a few years ago showed that teeth are a poor indicator of mammal evolutionary relationships compared to the rest of the skeleton. Our study builds on these findings by first testing whether any other anatomical regions are poor indicators of phylogeny, and second by investigating why some regions might perform worse than others.

In order to address this second question, we looked at rates of character change, as well as the modes of character evolution (for example, we looked at whether some partitions have more integrated characters, where a change in one character can drive a change in another). We found that while teeth are, for most mammal clades, a poor indicator of evolutionary relationships, they are not alone in this respect. Anatomical regions that are worse at reconstructing phylogeny have on average higher rates of evolution since this leads to an increased frequency of homoplasy (similar morphologies evolving in unrelated species). However, we do not find any evidence that these partitions have more integrated characters (characters more likely to change as a unit), contradicting suggestions in other recent studies.

Gemma Louise Benevento – We decided to write this paper after the Birmingham SVPCA conference. During the conference, Dr Rob Sansom spoke about his work on reconstructing fossil mammal evolutionary relationships using teeth. Dr Sansom showed that mammal teeth were not good at reconstructing these evolutionary relationships when compared to using the rest of the skeleton. This is a problem that is confounded by the fact that the mammal fossil record is dominated by teeth, which are much more easily preserved.

During our drive home after the conference, we spoke about this new research that had been presented, and we discussed what it could be that makes teeth such a poor indicator of phylogeny. At the time I had been thinking a lot about how mammal morphology related to functional ecology for my PhD. We discussed the idea that the more functionally relevant a skeletal partition was, the more likely it might be that function would drive morphology rather than relatedness.

Teeth, however, are not the only trait that has evolved for a specific functional task in mammals. We decided to test whether any other regions of the skeleton might be just as bad at predicting relatedness as teeth and whether we could identify what it was about these characters that made them poor indicators of phylogeny. 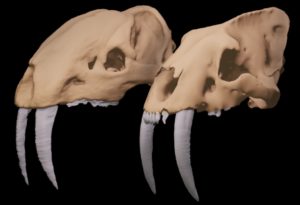 Left: Skull model from an extinct sabre-toothed mammal (Thylacosmilus atrox). Right: Skull model from an extinct sabre-toothed cat (Smilodon fatalis). An example of two distantly related species which have evolved very similar dental and skull morphologies; an example of homoplasy resulting in convergent evolution. These two species are from different mammal lineages. Thylacosmilus is a marsupial, more closely related to modern day Kangaroos and Koalas than to Smilodon. Smilodon is a placental mammal and is closely related to modern day cats. Both species have independently evolved elongate upper canines in response to their feeding ecologies.
Images of models created and provided by Dr.  Stephan Lautenschlager.
© Stephan Lautenschlager

To reconstruct the evolutionary relationships of fossil organisms, palaeontologists have to rely on skeletal anatomy. The presence or absence and the size and shape of skeletal features are scored to find similarities and by extension closely related species. The methods we have for analysing these features come with certain assumptions about how they have evolved, assumptions which are more and more being shown to not always be valid.

Palaeontology and the study of evolution have been undergoing a statistical revolution in the last couple of decades, and we can now test how well our characters fit these assumptions. We hope that in future people will think about how the assumptions of their methods may be affecting the results. In particular, bearing in mind the results of this research, accounting for the variation in evolutionary rates is a must when analysing phylogeny.

Neil Brocklehurst – I’ve been a member of PeerJ since 2015 now and have published numerous times with them. They have fast become a well-respected journal among palaeontologists. The open-access format and open review process are extremely appealing because it allows our research to be more widely available and the publication process to be more transparent. Since I now have membership allowing me one publication without fees, PeerJ has given me a widely read venue for publishing research.

We were happy with our overall experience with PeerJ. We had insightful reviews from knowledgeable researchers in our field, whose comments helped to improve our manuscript.

Thank you, Neil and Gemma, for sharing more about the research process in action!