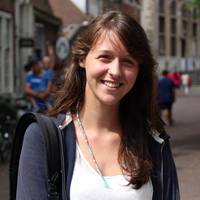 Today we published “Spotting the “small eyes”: using photo-ID methodology to study a wild population of smalleye stingrays (Megatrygon microps) in southern Mozambique“. In this study, scientists assessed the suitability of photographic-identification for identifying these stingrays.

Here, author Atlantine Boggio-Pasqua from the Marine Megafauna Foundation shares more about this study and the innovative methods used to initiate long-term monitoring of this threatened species. According to this research, clear spot patterning on smalleye stingrays shows enough variability to accurately match and distinguish individuals visually.

Smalleye stingrays (Megatrygon microps) are the largest known marine stingrays on record, reaching disc widths of up to 222 cm (Garman, 1913), and yet we know almost nothing about them. Despite their imposing size, these elusive animals remain listed as Data Deficient in the IUCN Red List of Threatened Species and very few divers know about their existence. While reports of individuals caught in fisheries suggest the species has a wide distribution across the Indian and West Pacific Oceans, M. microps has only been seen free-swimming in a handful of places. Possibly the best location to encounter them is Tofo, Mozambique where the stingray was first recorded by Andrea Marshall and Simon Pierce in 2004 (Pierce, White & Marshall, 2008). Since then, encounters have been reported regularly along the southern coastline of country, making it a reliable area to study this ray in the wild.

I arrived in Tofo in June 2018 for an internship with the Marine Megafauna Foundation. While I was impatient to see the town’s marine superstars, the manta rays and whale sharks my attention was immediately caught by the enigmatic smalleye stingray and the nearly fifteen years of raw data patiently collected by MMF researchers before me. I was lucky enough to encounter my first smalleye only a few weeks after I arrived. I remember watching this charismatic, dinosaur-like ray slowly flapping its pectoral fins, with its white dorsal spots almost glowing in the blue (or green on this particular dive)… It was both fascinating and incredibly motivating. From this moment, I was obsessed with spotting them during my dives – eager to find out more about this mysterious giant. 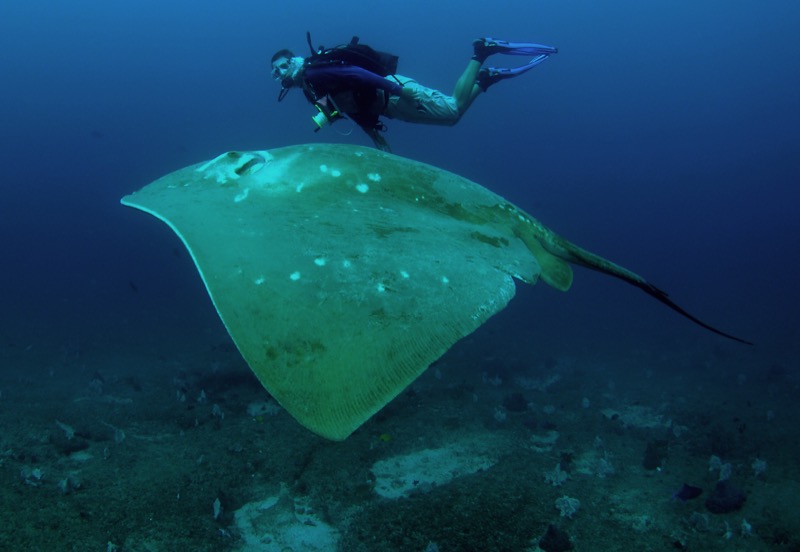 Our study aimed to lay the foundation for future smalleye stingray research in Mozambique. We started with a photographic-identification approach, assessing its suitability to confidently identify individual smalleye stingrays for long-term monitoring. In the last decades, photographic-identification, e.g. a methodology using natural permanent markings to distinguish individual animals, has become a common way of studying other ray species such as manta rays, eagle rays and skates.

As M. microps’ white dorsal spots looked very distinctive from one individual to another, we compared images and videos of this area of the animal’s body. Our images were mostly collected in the Tofo area, followed by the Bazaruto Archipelago National Park (200 km north of Tofo) and Zavora (80 km south of Tofo). Fortunately for us, southern Mozambique and its rich marine life attract many passionate recreational divers, most of which well-equipped with affordable lightweight cameras and will happily make their images and footage available for research. Through the local dive centers, we called on ‘citizen scientists’ (recreational SCUBA divers with cameras) to help us collect images of the smalleye stingray- ultimately gathering more than 140 photographs suitable for comparison and identification. 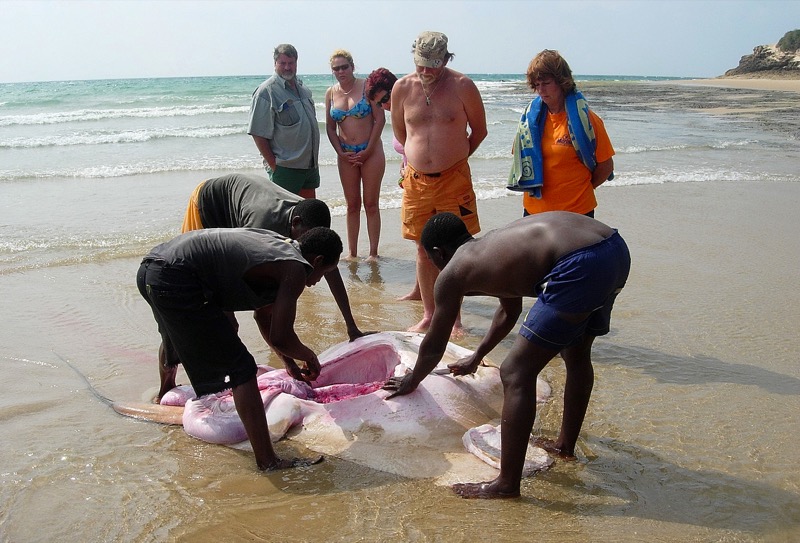 From these photos we visually identified 70 individuals, including 15 which had been spotted more than once in the study area. Dorsal spot patterning looked unchanged for all re-sighted smalleye stingrays over periods of up to six years- indicating they may be permanent or fixed markings like in manta rays. This photographic study also gave us a glimpse of their migratory capabilities, as we had re-sightings of the same individual in different locations: some stingrays proved to be able to travel hundreds of kilometers along the coastline, revealing a regional connectivity between the three study sites. Most notably, one near-term pregnant female completed a 400 km return trip from Tofo to the Bazaruto Archipelago (200 km within 102 days) and back. This was perhaps not that surprising considering how fast and agile these animals are in the water. 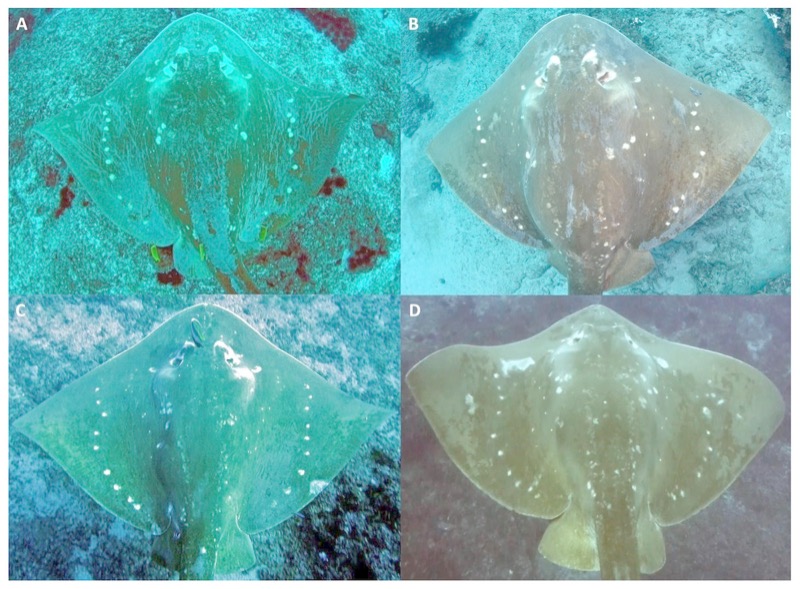 Figure 2: Variation in the natural spot patterns across the dorsal surface of Megatrygon microps from the Inhambane Province, Mozambique. © 2019 Boggio-Pasqua et al. (CC BY 4.0)

One of the great outcomes of the peer-review process was the suggestion by one of the paper’s reviewers: he suggested this may be one of the longest distance migrations ever recorded for a whiptail stingray. Indeed, the Dasyatidae family comprises more than 80 species of whiptail stingrays, and among them, most documented species are known for being significantly less mobile. After a careful literature review, we can now confirm that this is indeed the longest distance migration documented for a whiptail stingray to date. Pelagic stingrays (Pteroplatytrygon violacea) are also known to travel great distances (Weidner, Cotton & Kerstetter, 2014) with suspected, but yet to be confirmed, seasonal migrations of hundreds to thousands of kilometers (Mollet, 2002). 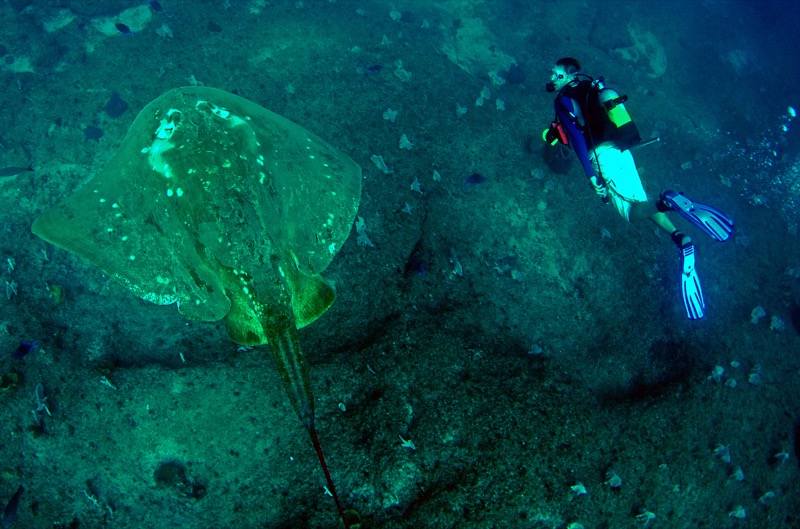 The principal limitation of this opportunistic photo-ID study lies in the absence of double marking that would provide an independent confirmation of the individuals’ identities. However, we believe the clear spot patterning on smalleye stingrays shows enough variability to accurately match and distinguish individuals visually. Citizen scientist contributions proved immensely valuable in collecting images of this rare stingray. MMF are huge proponents of citizen science fueled research of threatened marine megafauna. I am a believer now too and would stress that more opportunities should be created to allow the public to become directly involved in projects like these. Such contributions could also provide useful insights into M. microps ’ecology, such as habitat preference and use, feeding and cleaning behavior. So far, the only available footage of a feeding smalleye stingray is from a BBC dolphin documentary filmed in Ponta do Ouro Partial Marine Reserve, the southernmost part of Mozambique (Pilley, 2014).

Unfortunately, M. microps is likely to be subject to increasing pressures from targeted artisanal fishing and incidental capture in the gill and seine nets used extensively and indiscriminately along the coastline. Addressing the lack of available data, especially of biological variables such as size at maturity, reproductive rate, gestation period and longevity will be crucial to establish appropriate management strategies in Mozambique and other parts of the Indian Ocean, and will eventually allow a re-assessment of the species’ conservation status in the IUCN Red List.