Discovering the Pacific mastodon: the importance of challenging assumptions of well understood taxa

Earlier this month we published “Mammut pacificus sp. nov., a newly recognized species of mastodon from the Pleistocene of western North America“. In this study, researchers report on key taxonomic differences between the American mastodon, Mammut americanum, and the newly identified Pacific mastodon found in California and Southern Idaho, Mammut pacificus.

Here, first author Alton Dooley from the Western Science Center shares more about the findings, how routine teeth measurements of museum mastodon collections triggered further investigation and the questioning of a long-held assumption, which ultimately led this groundbreaking discovery.

In Fall of 2014 I started a new position as director of the Western Science Center (WSC), a small museum in Southern California. WSC had a good collection of Pleistocene fossils that had been recovered in the 1990’s during the construction of Diamond Valley Lake (DVL) reservoir, but while the collection was well curated it had not been well studied; I was the first paleontologist on WSC’s payroll.

One of the surprising things about the DVL excavations was the number of mastodons that were recovered (Springer et al. 2009). WSC holds more than half of all the mastodon remains ever recovered from California. Shortly after I was hired I made the decision to focus WSC’s marketing identity on mastodons and to revamp our mastodon displays. To that end, I wanted to make updated panels emphasizing the large size of “Max”, which Springer et al. (2009) and described as the largest mastodon known from the western United States. This was significant in that there was a perception that California mastodons were much smaller than their eastern counterparts, and the DVL collection challenged that narrative. Specifically, I wanted to take a representative measurement from Max and show that it was larger than samples from Rancho La Brea (RLB) in California but comparable to mastodons from the east. It happened that I chose to measure the teeth, which turned out to be a fortuitous choice.

I compared Max’s teeth to published measurements of mastodon teeth from Florida from Green (2006) and to Rancho La Brea measurements from an abstract by Trayler and Dundas (2009). To my shock, Max’s teeth were the smallest in every dimension, but particularly in width. I contacted Eric Scott, who was one of the authors of the Springer et al. paper, and he explained that they had never looked at the molars; they had based their interpretation of Max’s size on his femur and tusks, which are demonstrably quite large. Over the next several months we pulled more data together and in early 2016 presented a talk at a WAVP meeting in which we suggested that molar size in mastodons is not a reliable indicator of body size, and in which we confirmed with a larger data set that RLB mastodons did seem to have narrow 3rd molars, and the same trend seemed to be present at DVL.

Mastodon teeth. On the left is a lower third molar from Max, the holotype of Mammut pacificus. On the right is the same tooth from a Mammut americanum specimen from Ohio.

After the WAVP meeting, paleontologist Greg McDonald provided us with measurements he had obtained of mastodon molars from various locations across North America. With the additional data the trend of narrow teeth in California specimens seemed even more pronounced. We suspected that the trend was real, and that it was either the result of a Founder’s Effect late in the Pleistocene or an adaptation to a particular food or habitat. We realized we were going to need a lot more data to test these hypotheses, so we launched a crowdfunding campaign to visit museums across the west and Midwest, measuring as many mastodon teeth as possible. Brett Dooley and I spent several weeks during the summer of 2016 driving across the country taking measurements, and through the rest of that year we made trips to various museums along the west coast. 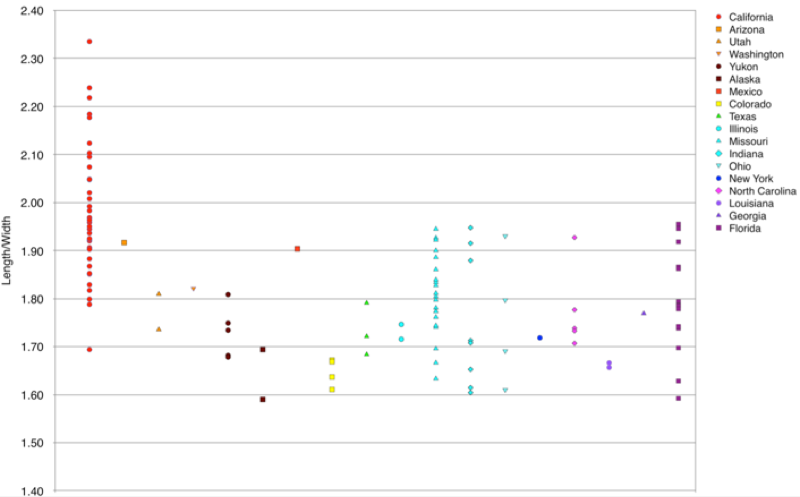 Length: width ratios of mastodon upper third molars by state. The California sample is the only one that differs substantially from any other state.

In August 2017 WSC hosted a symposium, “Valley of the Mastodons,” with about a dozen proboscidean workers in attendance. We presented our preliminary data to positive feedback, but immediately after the symposium, we were at a bit of a loss to explain our data. We had pretty well ruled out a Founder’s Effect or a habitat-specific adaptation, but we had no good alternatives. Eric, Brett, and I had numerous discussions over lunch rehashing the data and really getting nowhere. At some point in late 2017, I said something to Brett along the lines of “It’s funny, if these weren’t mastodons it would be easy to explain the data; they’re different because they’re different taxa.”

Saying it out loud made a difference. The idea that there was only one Pleistocene mammutid taxon in North America was an unstated assumption we had been following from the beginning. If we allowed the possibility of multiple taxa our data suddenly made a lot more sense. We spent more lunches and emails debating the merits of the idea, and bouncing it off colleagues, and it seemed to hold up. We asked Jeremy Green, Kathleen Springer, and Greg Smith to join us on the paper to bolster our statistical arguments, dating, and biogeography. And we realized that if this new hypothesis was correct (I’m not sure any of us completely believed it at that point) we were going to need additional characters. 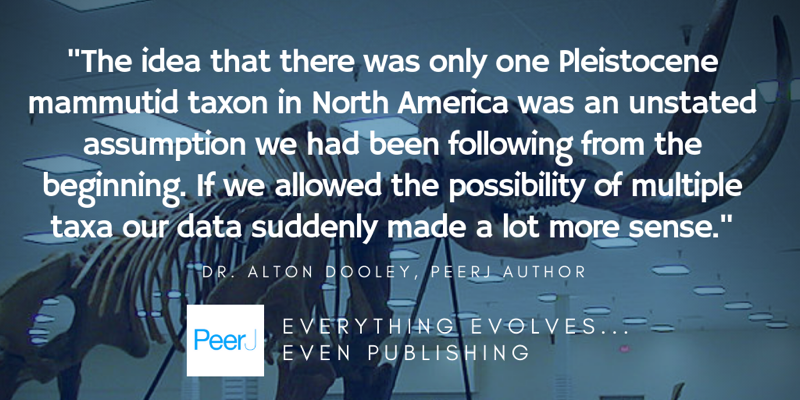 This was a bit of a problem. When we did our data collection trips in 2016-17, a new taxon was nowhere on our radar. As a result, we focused on tooth measurements and mostly ignored the postcranial skeleton. Fortunately, we had photographed and measured some elements, and were able to get additional data from the literature, so we were able to add femoral and sacral characters that supported our tooth data. I think that’s when most of us were finally convinced we had enough data to move forward and submit.

From the very beginning, we had made a commitment to publish whatever paper we ended up writing as open access, with open data; the lack of published measurements of mastodon teeth had really slowed down our research and we figured, if nothing else, the data would be a valuable contribution. As we realized we were dealing with a new taxon, we also decided to make 3D scans of as many specimens as possible available online. PeerJ was always my first choice for the submission; WSC’s curator Andrew McDonald had good experiences in 2017 publishing the new taxa Invictarx zephyri and Dynamoterror dynastes with PeerJ, particularly with the peer review process. I have also been a reviewer for PeerJ and was pleased with the process from that side of things.

Now that the paper is published we have more time to reflect on its implications. It still comes as a bit of a shock to me that this species remained unnoticed for so long, even though I think I understand how it happened. Even while acknowledging that there’s a lot to learn about the Pleistocene, it is perhaps the most studied and best understood slice of geologic time. It wasn’t very long ago, and Pleistocene deposits are found all over the world; it’s the “low-hanging fruit” for vertebrate paleontology studies. All this is especially true for Pleistocene megafauna, and particularly proboscideans. The last Pleistocene proboscidean described from North America was the Channel Islands pygmy mammoth (Mammuthus exilis) 91 years ago. The genus Mammut was actually named 220 years ago; there have been numerous papers written about it, and mastodon skeletons are on exhibit all over North America. All of this leads to the perception (that I used to share) that this is an exceptionally well-understood taxon. If you wanted to work on mastodons, and your assumption was that Mammut americanum is the only Pleistocene species, California was one of the last places you would come to study them. Prior to the DVL excavation there were only a small number of specimens scattered in museums across the state. Discovering Mammut pacificus required fossils from a new locality that were actually saved and placed in a small museum with an interest in seeing research done on its collection. And even then it took some luck, picking the right thing to measure.

It’s always difficult to predict the future path of science, but there are some obvious questions raised by our research. Are there other mastodon species hiding out in museum collections, misidentified as American mastodons? Our tooth data actually bolsters the idea that there are not any other Pleistocene mammutids lurking in North America. With the M. pacificus data removed, the remaining Mammut data actually clusters quite closely (California mastodons show more variation in tooth proportions that the entire rest of North America combined). But it doesn’t completely rule out the possibility of additional taxa.

When did M. pacificus and M. americanum diverge from each other, and what if any geographic conditions led to their divergence? Did the two taxa have similar environmental preferences, and did they fill the same niches in their respective ecosystems? How do the answers to those questions affect our interpretations of Pleistocene ecology and our understanding of other Pleistocene taxa? We’re already working on some of these questions, and I expect and hope that there will be additional ones that haven’t yet occurred to us. I think ripples from this paper will be affecting Pleistocene research for years to come.

Green J L. 2006. Chronological variation and sexual dimorphism in Mammut americanum (American mastodon) from the Pleistocene of Florida. Bulletin of the Florida Museum of Natural History 46(2):29-59.

Trayler R B, Dundas R G. 2009. Rancho La Brea mastodons, are they smaller than Mammut americanum from elsewhere in the United States? Geological Society of America Abstracts with Programs 41(7):454.