When and why did the giant mega-toothed shark Otodus megalodon become extinct?

Today we published “The Early Pliocene extinction of the mega-toothed shark Otodus megalodon: a view from the eastern North Pacific“. In this study, researchers review all records of the shark from western North America to get a better understanding of when and why this giant shark became extinct.

During my years as an undergraduate student I began a research program documenting and studying fossils of sharks, fish, sea birds, and marine mammals from the 7-3 million-year-old Purisima Formation near Santa Cruz, California. After five years of collecting I had recovered a modest collection of shark fossils, including basking sharks, great white sharks, sixgill sharks, and others – but never the ‘crown jewel’ of fossil sharks, the enormous teeth of the giant shark Otodus megalodon (formerly classified in the genus Carcharocles). I had found partial teeth of this species in older sediments, but never from the Purisima. 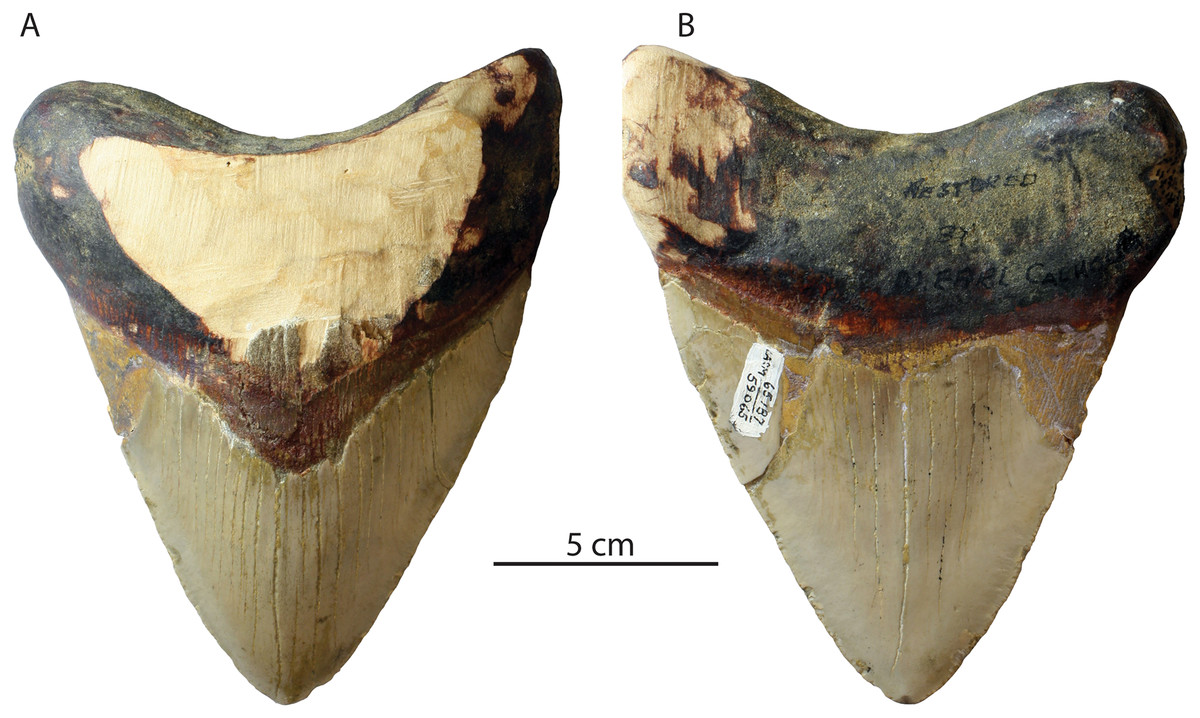 Finally, in 2007, the day before Christmas Eve – a day I have always earmarked for fossil collecting – I found the greenish-blue blade of a gigantic tooth emerging from a 7 million-year-old sandstone bed. After a half hour of furious chiseling, it was mine. Or, at least temporarily – because a few years later I donated the specimen, now in collections of the University of California Museum of Paleontology; I wrote a short paper about it in 2016.

Since then I have not found a second tooth, although I’ve heard of one in a private collection. It got me thinking: why was O. megalodon so rare by the Pliocene epoch (5.3-2.5 Ma)? Is the rarity genuine? When exactly did O. megalodon become extinct?

A paper published in 2014 took a decent first stab at this by compiling records worldwide with associated age determinations and concluded that O. megalodon most likely became extinct by or around 2.5 Ma (Pimiento and Clements, 2014). One issue is that these are isolated dates from disparate basins with patchy rock records; what about picking a single basin with stratigraphically separated fossil assemblages representing a more or less continuous record? 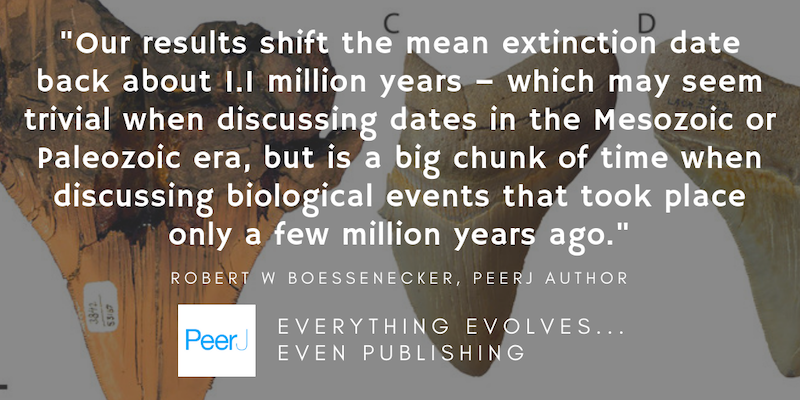 I teamed up with colleagues Dana J. Ehret, Douglas J. Long, Morgan Churchill, Evan Martin, and Sarah Boessenecker to address these questions. We decided against a single sedimentary basin, but knew that the stratigraphic record from the west coast of North America – chiefly California and Baja California, which we knew quite well – had marine vertebrate assemblages from the Miocene, early Pliocene, late Pliocene, and Pleistocene. So, we set about tracking down as many west coast fossils of O. megalodon from the past 8 million years as we could from a number of different localities. We also went back to the geological literature and dredged up as much data as we could in order to evaluate the age of these fossil occurrences to the best of our ability – using evidence from lithostratigraphy, biostratigraphy, strontium isotopes, ash fingerprinting (tephrochronology), magnetostratigraphy, and radiometric dates.

Many of these teeth are pristine, and therefore date to the same age as the sediment they were deposited within. However, other specimens are worn and broken and bear evidence of being reworked – eroded from pre-existing strata and redeposited into deposits much younger than the actual fossil (paleontologists use the term ‘allochthonous’). When we excluded specimens with evidence of reworking, we found that all ‘genuine’ (paleontologists use the term ‘autochthonous’) fossil occurrences of O. megalodon were from the early Pliocene at the youngest, and therefore older than 3.6 Ma.

Aside from this ‘qualitative’ approach, we reevaluated the 2014 worldwide dataset and added some additional fossil occurrences in order to address this issue in a quantitative manner. Several issues were apparent from an initial audit of this dataset. Some of the ages were wrong – some too old, others too young. This is a common problem as paleontologists might report a fossil in a scientific paper, but geologists subsequently re-name the rock unit or publish better age data later on. This is of course solved with a little bit of library time. Some specimens were simply misidentified teeth of the modern great white shark (Carcharodon carcharias) which appears about 5 Ma and lasts to the present; these teeth obviously cannot be counted. Other dates were simply too broad: sometimes when detailed data is not available, a fossil occurrence or rock unit may be simply identified as “Pliocene” without reference to the early or late Pliocene. In which case, it’s not possible to tell which it is – and therefore is not informative to telling where within the Pliocene the minimum date on the fossil is.

Other fossil occurrences just had a good maximum date, but no minimum date. In some cases, the age of the rock unit the fossil was collected from was actually based upon the occurrence of O. megalodon – which is an example of circular reasoning, and therefore uninformative. Many older occurrences of fossils lack clear provenance and locality data and are thus unsuitable for such a study. Some specimens from this dataset are actually specimens still held in private collections and, therefore, cannot be evaluated by scientists. Lastly, some of the dates are based on unpublished data not available to scientists, stated without evidence on a museum label with unclear and wholly unknown reasoning. We considered these to be our rejection criteria – all are serious problems that may bias an analysis. Therefore, we removed every fossil occurrence that satisfied one (or more) of these rejection criteria.

After running a statistical analysis that predicts the probable extinction date based on the range of dates in the revised dataset, we recovered results that contrasted a bit with those published in 2014. Our interval is much shorter – O. megalodon was probably extinct by 3.6 Ma, certainly by 3.2 Ma, and possibly as early as 4.1 Ma – a 900,000 year interval, which is quite good. In the 2014 study, this interval was much wider (3.66 million years long) with a mean extinction date of 2.5 million years. Our results shift the mean extinction date back about 1.1 million years – which may seem trivial when discussing dates in the Mesozoic or Paleozoic era, but is a big chunk of time when discussing biological events that took place only a few million years ago. We interpret the narrower range as a result of tossing out junk data. 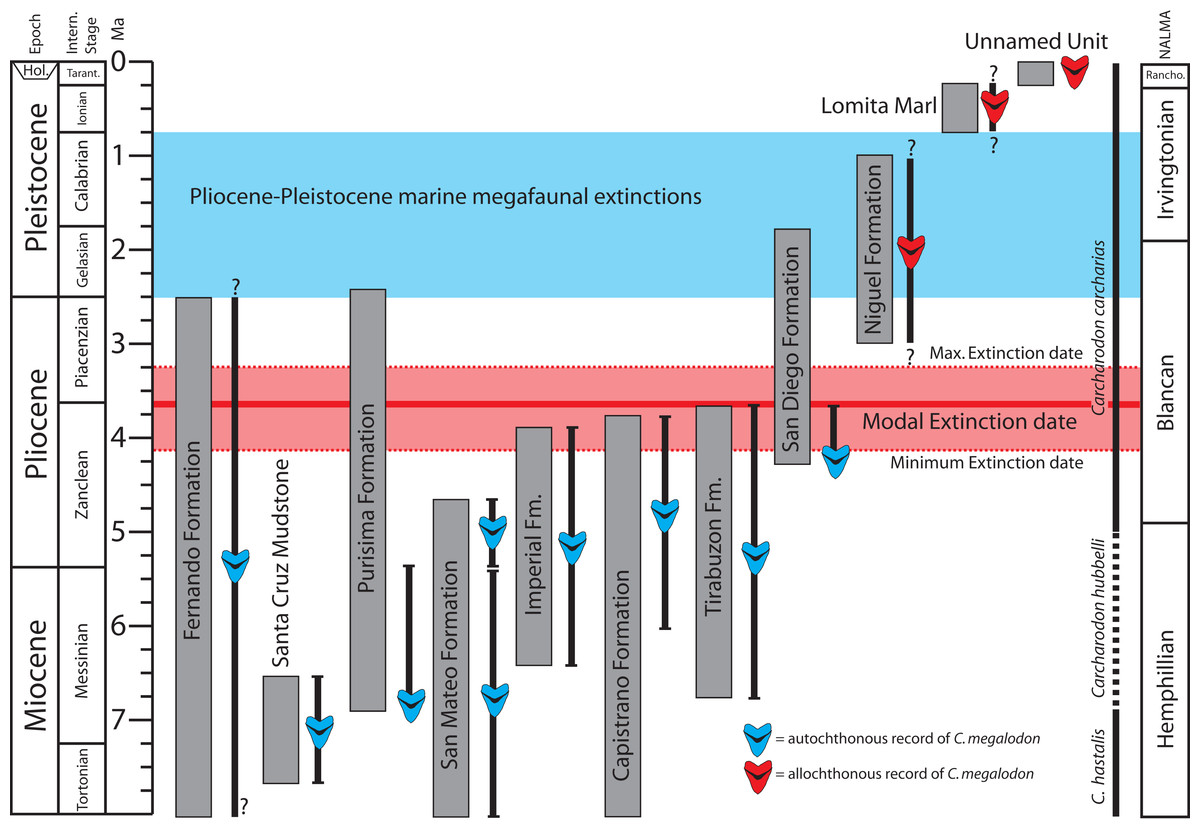 So what does this mean? The extinction of O. megalodon has been tied to a possible marine mammal extinction event that occurred at or near the Pliocene-Pleistocene boundary that was only recently identified (Boessenecker, 2013; Pimiento et al., 2017). A bunch of strange marine mammals including warm water toothless walruses, double-tusk walruses, warm water belugas, aquatic sloths, walrus-face whales, dwarf baleen whales, and a suite of strange dolphins and porpoises was replaced with modern genera and species. Late Pliocene and early Pleistocene deposits with marine mammal assemblages are rare, so it is unclear if this is a true mass extinction simply a 1-2 million year period of faunal turnover – current data cannot discern one hypothesis from the other. Nevertheless, the disappearance of O. megalodon at 2.5 Ma as previously determined led some astronomers to hypothesize that a well-documented supernova at about 2.6 Ma bathed the earth in Muon radiation, which is especially harmful to large animals in shallow coastal environments.

Issues of the pattern of Plio-Pleistocene faunal change aside, there is now one major issue with this admittedly ‘sexy’ hypothesis: O. megalodon was gone well before this supernova happened. As for those strange marine mammals? Many of them persist for at least 1 million years after our newly adjusted extinction date. Therefore, the supernova and marine mammal extinctions (regardless of whether these even correlate) – have nothing immediately to do with the extinction of O. megalodon.

So what drove O. megalodon to extinction? The one event that does seem to match up with the new timing is the final expansion of the anatomically modern great white shark (Carcharodon carcharias) to all ocean basins it currently inhabits by about 4 Ma. This shark evolved about 6-7 Ma in the Pacific, developing a serrated tooth from its ancestor Carcharodon hastalis. It did not leave the Pacific Ocean until about 4 Ma.

We don’t know yet if competition led to an earlier extinction of O. megalodon in the Pacific – better data and an expanded record will be necessary to investigate that possibility – but once C. carcharias expands to a worldwide range coinciding with the entire range of O. megalodon, it is no coincidence that O. megalodon becomes extinct. How might this happen? After all, O. megalodon was a much, much larger shark. Carcharodon carcharias may have competed with juveniles of O. megalodon for smaller prey items, “knocking out” a growth stage of O. megalodon.

Studies like this help clarify the chronology of biotic events in the oceans over the past few million years. Most of our knowledge of the past 2-3 million years is inferred based upon the differences between the modern fauna and early Pliocene fossil assemblages, with scarce data in between. Every step towards a more accurate albeit nuanced chronology of extinctions, dispersals, and first appearances of modern species sheds light on the most recent history of the largest, most fragile, and most abused ecosystem on earth.

Unlike the well-documented extinctions of Ice Age megafauna, the recent history of their marine counterparts is largely unknown. Decoupling the extinction of O. megalodon from this later ‘extinction’ event or period, and a supernova, certainly complicates the picture further – but leads to a more accurate picture. Studying extinctions like this may help identify patterns or risks to extant species from a different perspective usually available to conservationists.

Pimiento C, and Clements CF. 2014. When did Carcharocles megalodon become extinct? A new analysis of the fossil record. PLoS ONE 9:e11086.