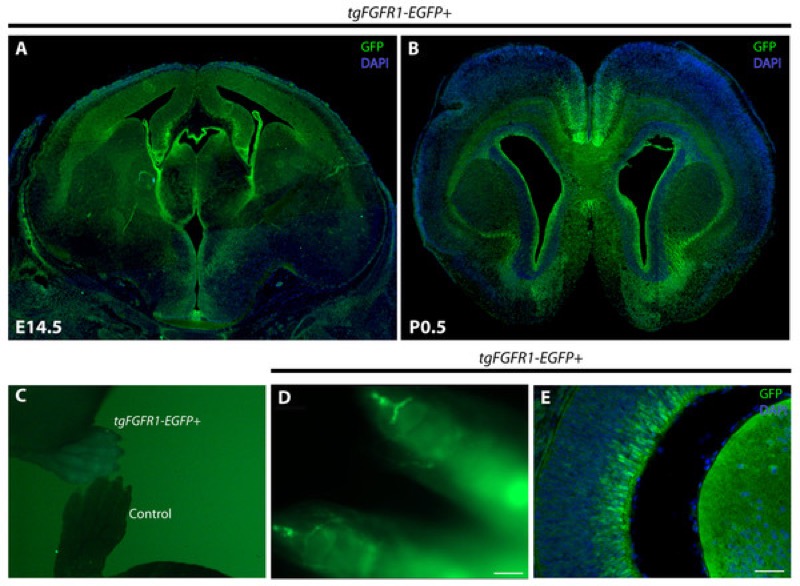 Fibroblast Growth Factor signaling has been shown to play a crucial role in brain development. This new study builds on previous research investigating Fibroblast Growth Factor receptor 1 and looks at how Fgfr1 is expressed in mouse brains – notably by radial glial stem cells in the cortex, hippocampal stem cells and newborn neurons, and Bergmann glial cells in the Cerebellum. We interviewed Karen Müller Smith about this publication and what these findings mean for the field.

PJ Can you tell us a bit about yourself?

Karen Müller Smith: I obtained my Ph.D. in Genetics from Tufts University Sackler School studying dopaminergic and noradrenergic genes in ADHD. I then did a postdoctoral fellowship in Childhood Neuropsychiatric Disorders at the Yale Child Study Center under the mentorship of Dr. Flora Vaccarino. It was there that I began to study the effects of Fibroblast Growth Factor signaling upon brain development and behavior. I stayed at Yale and became an Associate Research Scientist. In 2012, I became an Assistant Professor in Biology at the University of Louisiana at Lafayette.

Fibroblast Growth Factor Receptor 1 is a receptor for cytokines called Fibroblast Growth Factors, and has been implicated in depression, schizophrenia, and ADHD. I and my colleagues have previously shown that Fgfr1 knockout mice lack midline glia cells that guide axons across the middle of the brain. Fgfr1 knockouts are also hyperactive, have defects in GABAergic interneuron maturation, decreased proliferation of neural stem cells in the hippocampus, and together with Fgfr2 and Fgfr3, Fgfr1 is necessary for stem cell proliferation in the cortex and cerebellar formation. 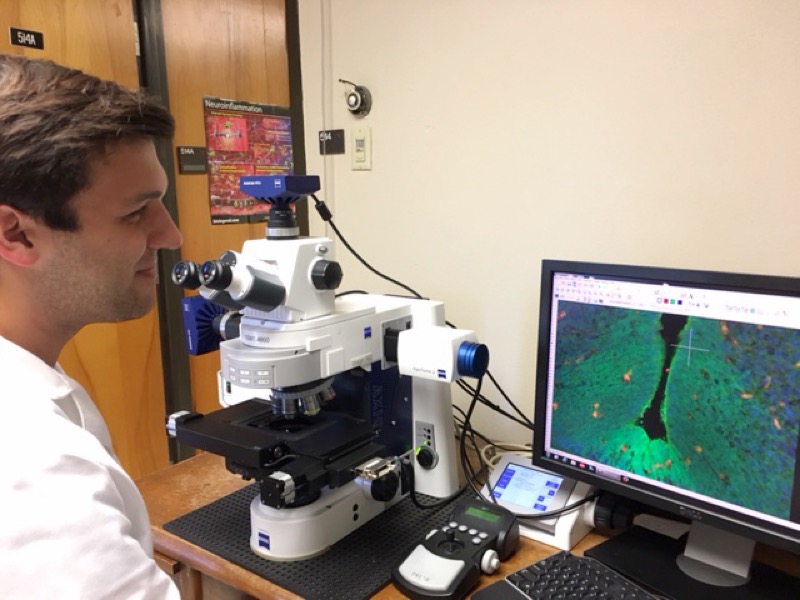 With all these important roles for Fgf signaling, we wanted to better characterize the expression of Fgfr1. In situ hybridization has shown us which areas express Fgfr1, but the cell type identification was lacking. Also, the antibodies against Fgfr1 may cross-react with other Fgf receptor family members. We, therefore, turned to the GENSAT mouse resource and obtained mice that have the Green Fluorescent Protein under the direction of the Fgfr1 promoter.

Together with our previous publication in PeerJ (Choubey et al. 2017) we have characterized the developmental expression of Fgfr1 in embryos, early postnatal time points and adult mice. We have found that Fgfr1 is indeed expressed by radial glial stem cells in the cortex, hippocampal stem cells and newborn neurons, and Bergmann glial cells in the Cerebellum. Furthermore, we have confirmed expression in midline glial cells that guide axons, although we now also know that Fgfr1 is expressed in neural cells of the anterior cingulate while it is forming. 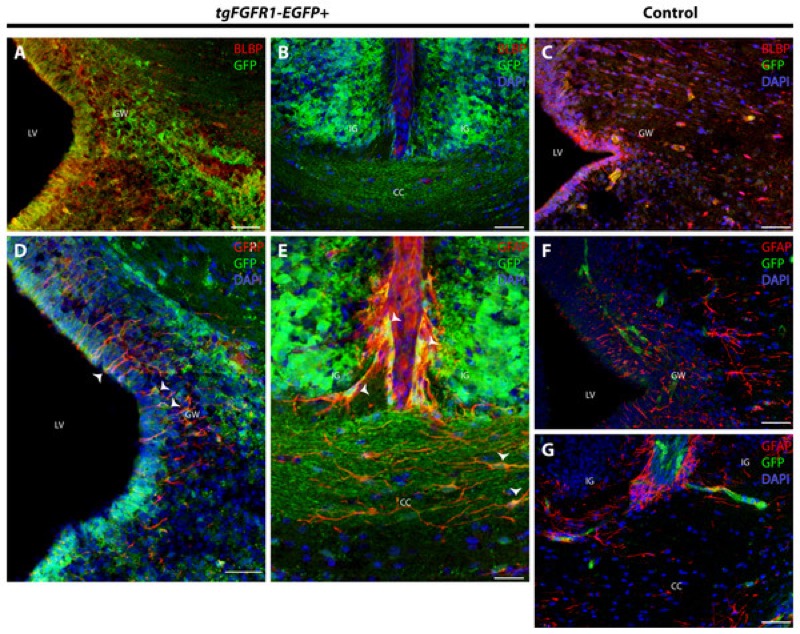 This is an important area for emotional and behavioral regulation, and is of great interest to those studying neuropsychiatric disorders. Fgfr1 is also expressed in glial cells, particularly astrocytes, especially as radial glial cells that are BLBP+ detach and undergo a form of migration called soma translocation.

Another important glial cell that expresses Fgfr1 are tanycytes of the hypothalamus, these cells play critical roles in hormonal regulation and metabolism. Overall, glial cells that play important developmental roles as stem cells, axon guidance, neuronal migration, or have a specialized function and morphology, all express Fgfr1. This mouse line which is publicly available through GENSAT and the Mutant Mouse Repository will serve as a useful tool for studies of Fgfr1 expression in development, injury, repair, and the effects of stress on brain development.

While my previous work has focused largely on the cortex and hippocampus, I could not help but be in awe of the beautiful pattern of expression within the hypothalamic tanycytes, cells that make contact with the CSF and have long radial projections into the hypothalamus. Tanycytes are thought to transport some of the signals from the CSF to the neurons of the hypothalamus. Interestingly, Fgf21, which is secreted by the liver, has recently been shown to reduce the craving for sweets and meal size by its actions upon the hypothalamus. 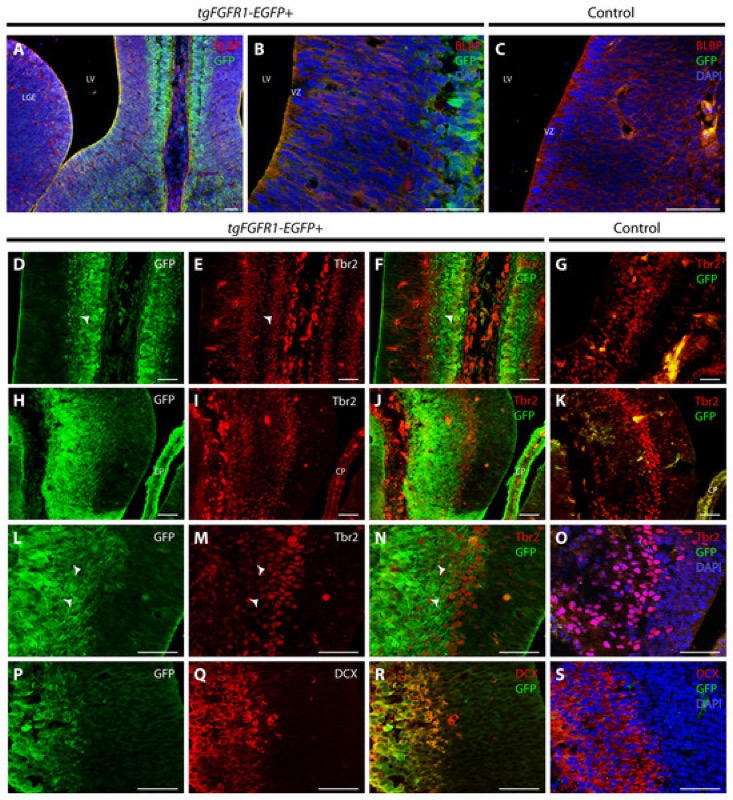 I first heard of PeerJ while researching online journals. I came across an article comparing different formats and I was intrigued by the concept of membership, and the flexibility to pay as a one-time fee as well. For us, with two papers that were complementary, and had the same three authors, it made sense to buy memberships. Knowing that PeerJ is indexed in Pubmed and Web of Science, and that it has been around long enough to have an impact score were also important factors.

I had some frustrations with image size and file size uploads. I wish that I had reached out to the support team earlier in the process. I would have saved myself a lot of trouble. The support team is great and if you are stuck with something (like a file that is too big), they can help out.

There were updates every step of the way, and the reviews came back in a timely manner.

PJ: To help future authors, can you briefly explain the process you followed when you got the first decision and how you organized the revision and rebuttal?

After the first decision, we tried to address each of the critiques as best we could, and made changes to the paper and figures. We organized the rebuttal letter in such a way that the reviewers comments were each listed in italics, with the response just below the individual comment.

I do intend to submit to PeerJ again, and I would definitely recommend it to my colleagues.