Today we published Revision of “Balaena” belgica reveals a new right whale species, the possible ancestry of the northern right whale, Eubalaena glacialis, and the ages of divergence for the living right whale species by Michelangelo Bisconti, Olivier Lambert, and Mark Bosselaers. In this study, the researchers re-evaluated old whale bones and found these bones are from a number of different species, including an entirely new species of extinct whale. Phylogenetic analyses further confirmed the new species is closely related to a living species of right whale. We spoke to author Michelangelo Bisconti about the research, which first began over sixteen years ago.

I am a paleontologist specialized in studying baleen whale evolution. I am based in Tuscany, Italy and work with the San Diego Natural History Museum, California. Thanks to this job, in the last 20 years I had the opportunity to visit many museum collections in the world and to discover a number of extinct whale species. 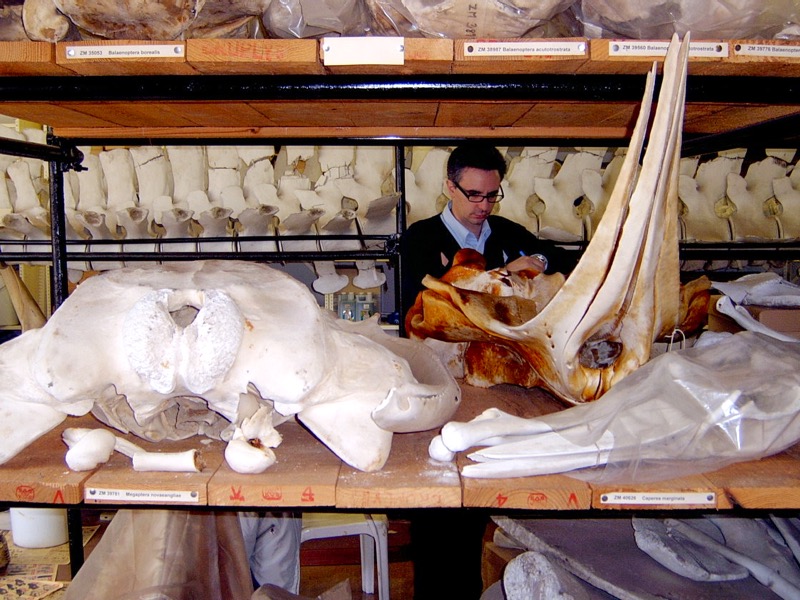 Michelangelo Bisconti working in the cetacean collection in Cape Town at the IZIKO Museum. Museums have often treasures for scientists interested in natural history. The picture was taken in 2008. Image courtesy of Dick Mol.

The paper that I and my co-authors (Olivier Lambert and Mark Bosselaers) have published in PeerJ is about the discovery of a new extinct right whale species. This discovery happened as a surprise as we were studying old bones that were excavated in the early years of the 20th century and that were assigned to the species Balaena belgica, an extinct right whale taxon belonging to the family Balaenidae (a baleen-bearing whale group including species characterized by arched rostrum and long baleen with four endangered species living today).

During our revision, we became aware that those bones actually belonged to a number of different species and for one of them, a beautiful skull, it was necessary to create a new species name, Eubalaena ianitrix. The species name ianitrix is from the Latin God Ianus that was the guardian of the gates and, as the skull was found at the entrance of the Antwerp harbor, we felt that this name was appropriate. 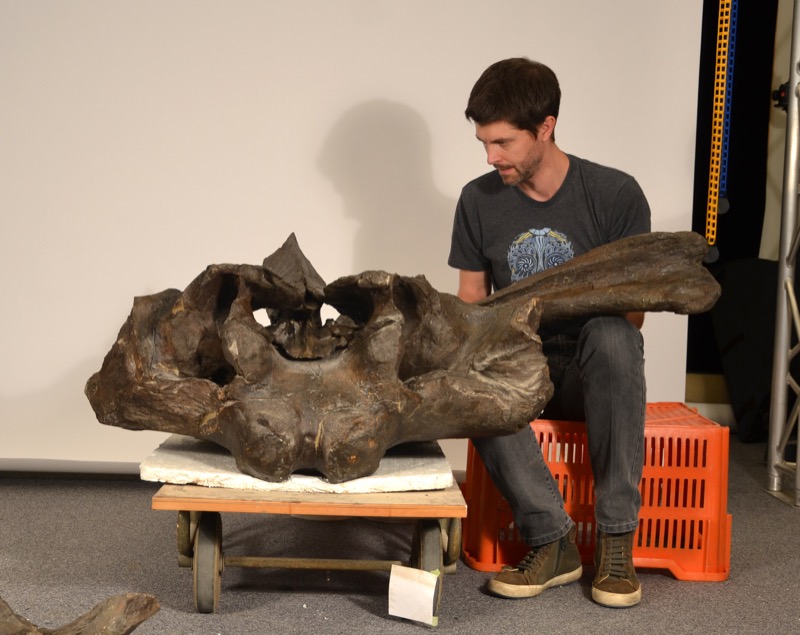 Olivier Lambert working on the holotype of Eubalaena ianitrix (the new right whale species being described in the PeerJ article by us) in the Royal Belgian Institute of Natural Sciences of Brussels.

Our work included also the research of the phylogenetic relationships of this new species. Such research resulted in a new surprise as we discovered that Eubalaena ianitrix was closely related to the living northern right whale, Eubalaena glacialis. This discovery suggested that we further deepen our study of the right whale phylogeny. In the end we estimated the evolution of body size and the ages of the divergences of the different balaenid species (both living and fossil) and we were able to provide arguments to support the hypothesis that Eubalaena ianitrix was the direct ancestor of the living northern right whale Eubalaena glacialis.

I started to study the bones described in the paper in 2001 at the Royal Belgian Institute of Natural Sciences in Brussels. Many years have passed and in 2010 I came back to Brussels and asked my colleagues to help me to study the large skull that we later used to create the new species. Mark Bosselaers and Olivier Lambert moved these large and heavy fossils to take measurements and photographs all the times I asked. 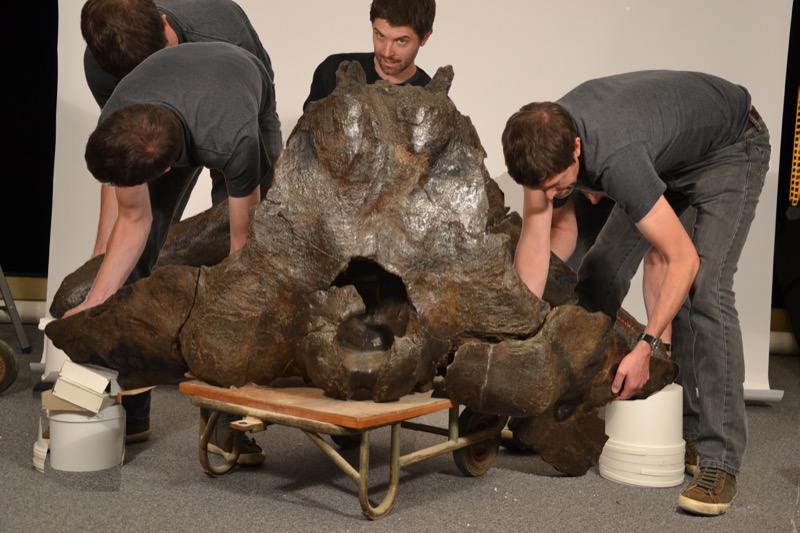 Olivier Lambert is multiplicated in this composite picture because he had to put in place detached parts of the skull.

It was a difficult and weary task for them. In any case, we needed a composite picture of the skull with some detached pieces put in place by Mark. It was necessary to make as many pictures as there were pieces and then we put all the pictures together to get the composite picture. The resulting image was amazing in that there was this large skull with many Mark clones all around.

Natural history collections are a treasure of information about fundamental patterns and processes of the evolution of life on our planet.

Natural history collections are a treasure of information about fundamental patterns and processes of the evolution of life on our planet. Their conservation and access should receive higher consideration by governments in terms of funds and cultural investments. We hope that the public can understand that these old fossils may help us in reconstructing the past

I had the opportunity to read papers published by colleagues in PeerJ. I immediately liked the format of the journal and the quick publication time surprised me a lot. I observed that the Impact Factor was not bad and the publication prices were affordable. In the end, all of this persuaded me to ask my co-authors if they would like to publish our manuscript in PeerJ.

PJ: How was your publishing experience with us?

I chose to publish in PeerJ firstly because the list of the editors included valued scientists whose scientific production I appreciate a lot. The choice revealed being right as the editor was very kind and motivated all the decisions based on the detailed peer reviews received in a short time by two reviewers. The process was quick and thorough. For the first time, I experienced a detailed search of eventual copyright violation and I appreciated that. The customer support actively helped us to improve the readability of the paper. On the whole, I am happy with my experience with PeerJ.

My experience about the submission and review process was streamlined. Everything was done quickly and thoroughly. It was a satisfactory experience.

PJ: To help future authors, can you briefly explain the process you followed when you got the first decision and how you organized the revision and rebuttal?

As usual, I and my co-authors subdivided the work of revision into different parts and each of us started working his own part. All the work was driven by the requests made by the referees and the editor. After a few weeks I included all the revisions received by my co-authors into a new version of the manuscript. The rebuttal letter included the list of the main changes made into the manuscript. It was rather easy to respond the reviewers and to prepare the rebuttal letter as the reviews were direct and constructive and asked us to make precise changes to the manuscript. As we agreed with these changes, it was not difficult for us to write down the new text and to prepare the new illustrations required.

It is the first time that I am interviewed by an international scientific journal. It is a new and interesting situation representing an additional opportunity that I am happy to experience. Thanks.