Yesterday we published “Quantifying climate change impacts emphasises the importance of managing regional threats in the endangered Yellow-eyed penguin” by Thomas Mattern et al. With an estimated 1,700 breeding pairs the Yellow-eyed penguin is one of the rarest penguin species worldwide. To understand the current threats to this endangered species, the researchers use a Bayesian model to assess the influence of climate change on population trends of the endangered Yellow-eyed penguin. If the current trend continues, the model projections suggest local extinction of the species by 2060. We interviewed the corresponding author Thomas Mattern about the impact of warming ocean temperatures and other human-related pressures that compromise the species’ resilience to ocean warming.

I am Dr Thomas Mattern and work as research scientist for the Global Penguin Society and the University of Otago in New Zealand, and am currently the co-director of the Tawaki Project. I was born in Düsseldorf, Germany and ended up as a graduate student in Marine Science and Zoology at the University of Kiel, which at the time was one of the strongholds on penguin research. So it seems logical that I would end up working on penguins as well. What I would not have imagined, though, was that my scientific career would bring me back to New Zealand where I first saw penguins in the wild when travelling the world after school.

For a few of years, we noticed that penguin numbers on the Otago Peninsula and other regions in southern New Zealand were undergoing a constant decline. Since we had almost 35 years’ worth of continuous monitoring data we were able to model population trends against a range of meteorologic and oceanographic variables. Since the mid-1990s penguin numbers have plummeted by about 75%, and if this trend continues our model projections suggest local extinction of the species by 2060. Our results showed that sea surface temperature had the greatest effect on the population trends.

Yet it did not tell the whole story as that explained about 30% of the variation in penguin numbers. Clearly, other factors have a significant impact on the penguins, most notably documented threats like fisheries interactions – especially accidental drowning of penguins in gillnets and alteration of their benthic foraging habitat -, pollution and human disturbance on land. However, since there are no quantifiable, long-term data available it is impossible to assess the relative contribution of these threats to the penguins’ demise. At the same time, these factors are all manageable on a regional scale – unlike climate change-induced ocean warming.

PJ: Do you have any anecdotes from the field working with penguins?

It may sound bizarre, but I have received emails asking me for tips on where to purchase a penguin as a pet. I was even confronted with a rumour that an American company maintains a designated penguin farm in Antarctica to breed them as pets! If only people knew how poor a pet a penguin makes! Anybody who has been working with penguins has at least a handful of scars to show off.

Trust the experts. You don’t want a pet penguin.

Dave Houston, one of our co-authors once described handling a Yellow-eyed penguin as ‘being pinched violently with pliers while getting thrashed with a pair of flip-flops”. He referred to the bite and simultaneous flipper beating that any penguin unleashes on its handler if it has a chance.

But the worst thing I witnessed, was a Yellow-eyed penguin that was sitting seemingly calm on the lap of a handler preparing a flipper band to mark the bird, when the penguin suddenly jumped up and grabbed one of the poor guy’s nostrils. It took us quite some time to detach the furious flipper beating penguin from the nose, leaving the unfortunate handler with not only a black eye, but also a serious nose piercing. Trust the experts. You don’t want a pet penguin.

PJ: What kinds of lessons do you hope the public takes away from the research? What regional coordination would be particularly beneficial for the survival of Yellow-eyed penguins?

I hope we could point out that the effects of climate change alone are not necessarily the death knell for this species. Instead, it is its combination of other human-related pressures that compromise the species’ resilience to ocean warming. I think it provides us with a strong argument to get together with the fishing industry and policy makers to assess and mitigate the effects of commercial fisheries on a charismatic species that, while it should be preserved in its own right, is also worth millions of dollars in tourism revenue. 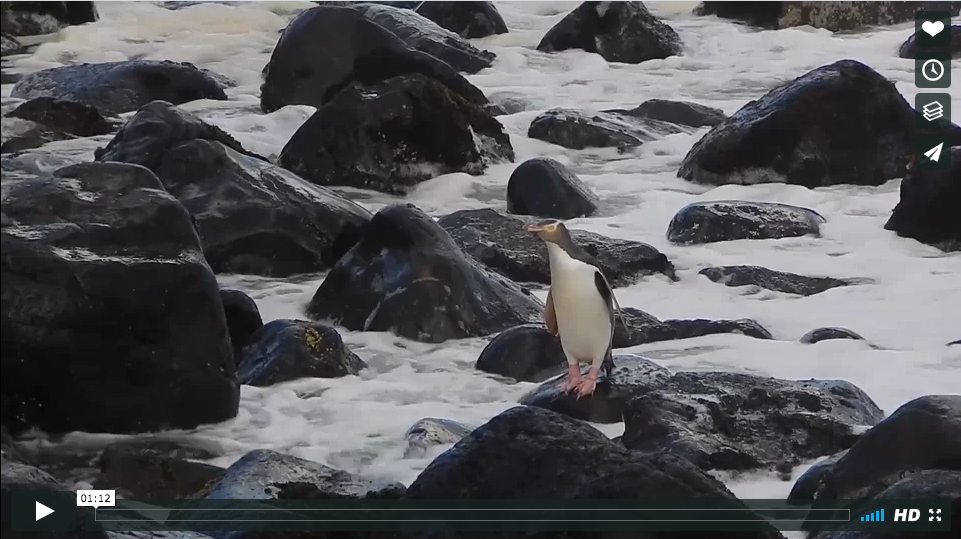 Moreover, we should revisit the proposals for marine protected areas (MPA) in New Zealand that are currently more often than not weak compromises with the goal of having the smallest possible impact on the fishing industry. Our findings should furthermore act as a strong argument to improve the water quality of New Zealand rivers that have deteriorated immensely in the past years as a result of unregulated farming practices; pollution that inevitably ends up in our coastal waters as well.

PeerJ was on my radar since its inception. Yet as an early career scientist page charges required to go open access can sometimes be a stumbling block. Still, I have been an open access advocate from the very beginning. For one, I hate it when my research gets blocked off behind a ridiculous paywall to people that have no academic affiliation (US$40 for a 50-years-old short communication that was cited 5 times? Seriously??). But I also dislike the business practices of the big, non-open access scientific publishers that reap maximum profits from hard working scientists.

One thing I keep asking myself is why so many science related publishers maintain such archaic websites and online submission systems that seem to date back to medieval times. So when I first used PeerJ’s submission system for one of our preprint manuscripts, I was pleasantly surprised how smooth the whole process was. I think I annoyed some of my colleagues by constantly exclaiming ‘This how it should be done!’

See above. Submission was super straightforward and easy. The review was also a very pleasant process. Quick and comprehensive with so many fail safes that it was easy to iron out many kinks that inevitably come with long papers.

Yes and yes. Although the first ‘yes’ is unfortunately always tied to available funds.

PeerJ was by far the greatest experience I had with regards to publishing a paper. I was particularly impressed with the enthusiasm with which PeerJ helped to promote our research after the paper was in dry towels.