Last week PeerJ published “Pollen extracts and constituent sugars increase growth of a trypanosomatid parasite of bumble bees” by Evan Palmer-Young and Lucy Thursfield.  Bumble bees throughout the world are facing significant issues with many species becoming extinct and endangered. Their decline has been attributed to many different factors including parasites and loss of flower-rich habitat. Evan Palmer-Young discusses his work investigating the dynamic between pollen extracts and bumble bee parasite growth. The study conducted 3 experiments testing different treatments on parasite cell culture growth and found that pollen extracts can actually increase the growth rate of parasites.

EPY: I am a graduate student at University of Massachusetts Amherst. I am working with Prof. Lynn Adler in the Organismic and Evolutionary Biology and Entomology graduate programs, where I study how chemicals in flowers affect health and disease of bumble bees. Before that, I worked for two years at the Max Planck Institute for Chemical Ecology with Meredith Schuman, Ian Baldwin, and Jonathan Gershenzon. I was investigating the abiotic stress resistance of wild coyote tobacco plants (Nicotiana attenuata) that had been genetically engineered with a gene from maize (Zea mays) that caused them to produce large amounts of sesquiterpenes. 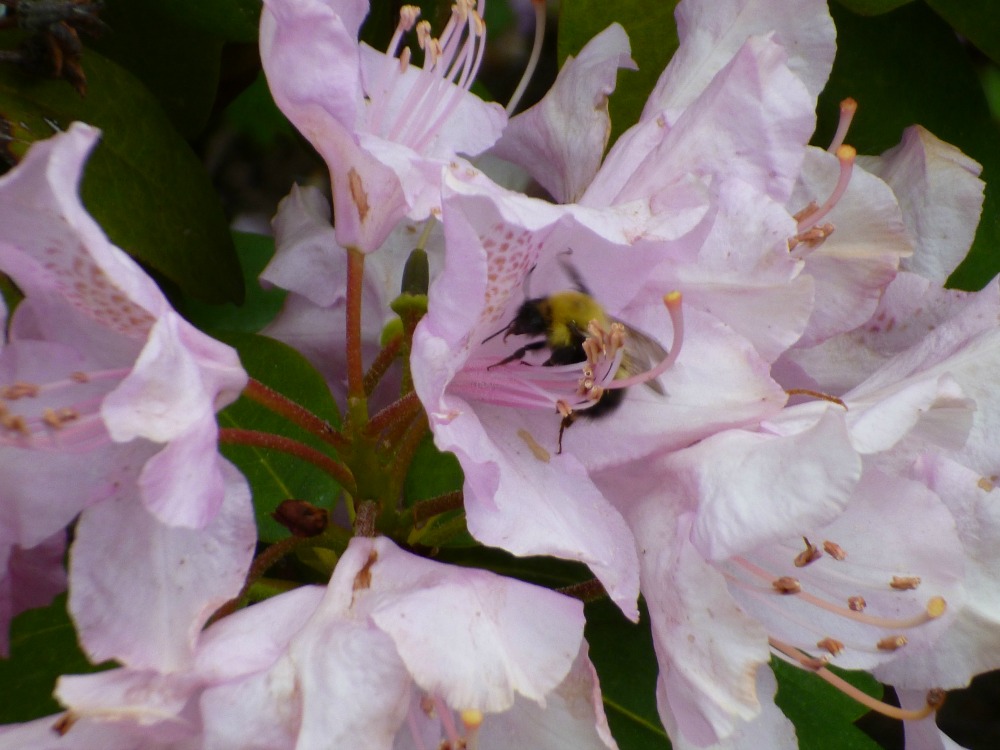 EPY: My experiments tested how pollen extracts affected the growth of an intestinal parasite of bumble bees, Crithidia bombi, grown in cell culture. I had previously tested how pure phytochemicals, alone and in combination, affected this parasite’s growth and evolution (Palmer-Young et al. 2016, 2017b, 2017a). In this study, I wanted to get away from testing pure phytochemicals and test extracts of real plants. After all, if phytochemicals are going to affect the health of bees in the wild, it will be as plant-produced mixtures rather than single compounds.

I see this research as a counterpoint to the recent articles on anti-parasitic properties of phytochemicals for bees (Costa et al. 2010, Manson et al. 2010, Gherman et al. 2014, Baracchi et al. 2015, Richardson et al. 2015). In contrast, my own research has indicated that the effects of phytochemicals on Crithidia bombi infection are variable in live bees (Biller et al. 2015, Thorburn et al. 2015), and that the parasite is unaffected by naturally occurring concentrations of most compounds (Palmer-Young et al. 2016). This study emphasizes that Crithidia bombi can tolerate not only single compounds but also phytochemical mixtures that occur in plants. And in retrospect, of course it should be able to tolerate floral phytochemicals, given its niche as a gut parasite of bees that feed on nectar and pollen. In fact, a couple of studies have shown that bees fed pollen end up with higher levels of infection than bees that are deprived of pollen (Logan et al. 2005, Conroy et al. 2016).

EPY: My main story is about the establishment of the cell cultures, which is the background that made this experiment possible. Originally, I had been assessing the effects of diet on infection of live bees, but I was finding it difficult to standardize conditions across experiments. I wanted to establish an in vitro technique so that I could test direct effects of different compounds and extracts against multiple parasite strains in parallel. I had read the paper by Rahel Salathé and colleauges (Salathé et al. 2012) that described how to do this, but I had never dealt with cell cultures or really done any microbiology at all.

It took me about 10 months of troubleshooting to get viable cultures and a working experimental protocol. The steps were 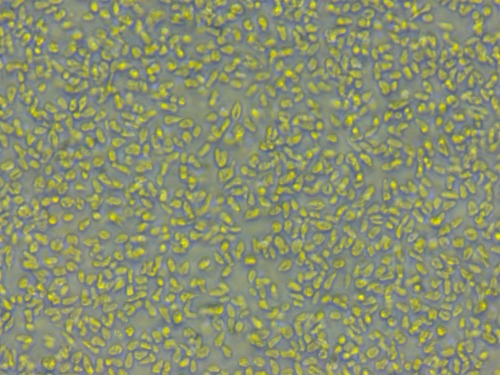 (1) Figuring out the isolation technique and obtaining access to and assistance with a flow cytometer,

(2) Obtaining strains that grew strongly enough that I could measure growth within a reasonable experimental timeframe,

(3) Figuring out how to resuspend the cells in the media with a microplate shaker; otherwise they settled out and gave inaccurate spectrophotometer readings, and

(4) Learning how to make and interpret a dose-response curve.

I got help all along from Paul and Regula Schmid-Hempel, Hauke Koch, Rahel Salathé, and especially Ben Sadd, who was very patient with my mistakes and provided both material and intellectual assistance.

EPY: I would like for this paper to demonstrate that both hosts and parasites can be adapted to the chemicals that they routinely encounter in their environments and that medicinal compounds are the exception rather than the rule. Pollen feeds bees; it also feeds their parasites. Given the tendency to want to forget negative results, but publish positive results, it can be easy to get a skewed picture of the actual relationship between plant chemicals, pollinators, and their diseases. 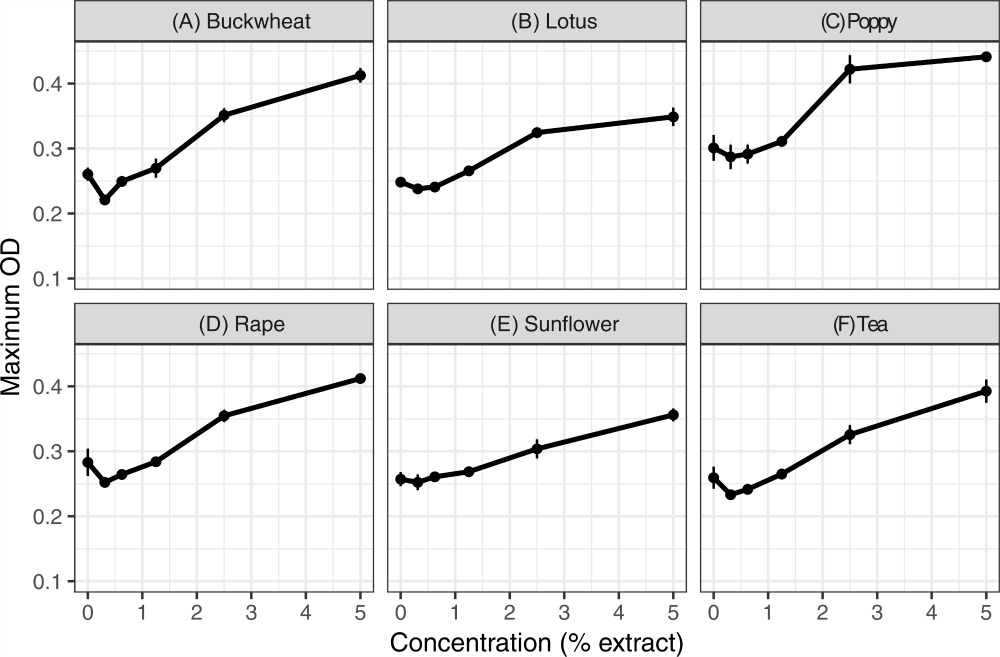 Pollen feeds bees; it also feeds their parasites. Given the tendency to want to forget negative results, but publish positive results, it can be easy to get a skewed picture of the actual relationship between plant chemicals, pollinators, and their diseases.

EPY: I had seen a couple of Google Scholar alerts and citations of PeerJ articles, for example, one about pesticides and Nosema infection of bumble bees, and another about shared pathogens in managed and wild bees (Graystock et al. 2014, Goulson 2015). I was looking for an open access journal with a timely peer review, and PeerJ seemed to be an author-centered and science-focused journal.

EPY: Things went well overall. The emails from real people, as well as the automated ones, kept me briefed on the status of the article—when a reviewer had been assigned when the paper had been reviewed, how to submit the revision. I also got prompt responses to my inquiries about article formatting.

The submission interface was standard, like that of other journals like PLOS and ScholarOne submission portal, except for the drag-and-drop file upload, which was a nice touch. I would like if the “recommend reviewer” field would not give separate pop-up windows for each reviewer added. This has kind of a “mobile phone interface” feel, and my connection always seems to time out while I am filling out the fields. PeerJ seems to have a progressive attitude, so maybe you will take the initiative here!

I was very pleased with the publishing itself. The submission system automatically created a preprint, and I thought the article reached a good number of people—it had over 100 views just the day it was published. PeerJ kept sending me reminders to send out celebratory Tweets!

EPY: I was impressed with the quality of the reviews, and appreciated that they were signed, so I could ask a few follow-up questions that clarified some of the comments made. Not that these were easy concerns to address—I had to completely reanalyze my data set, and conduct a new chemical analysis to quantify sugars in the pollen extracts. I was fortunate to have help from Phil Stevenson and Lucy Thursfield at Royal Botanic Gardens Kew, UK, who were equipped for this analysis, which required a special type of detector that can measure sugars.

EPY: Sure. I hope that the field moves in a PeerJ-ward direction in the future, where high-profile preprints are available up-front, and the priority is the advancement and sharing of knowledge. PeerJ is generally more affordable than other open-access journals, and has a faster turnaround time, yet I still felt I got thorough and helpful reviews. 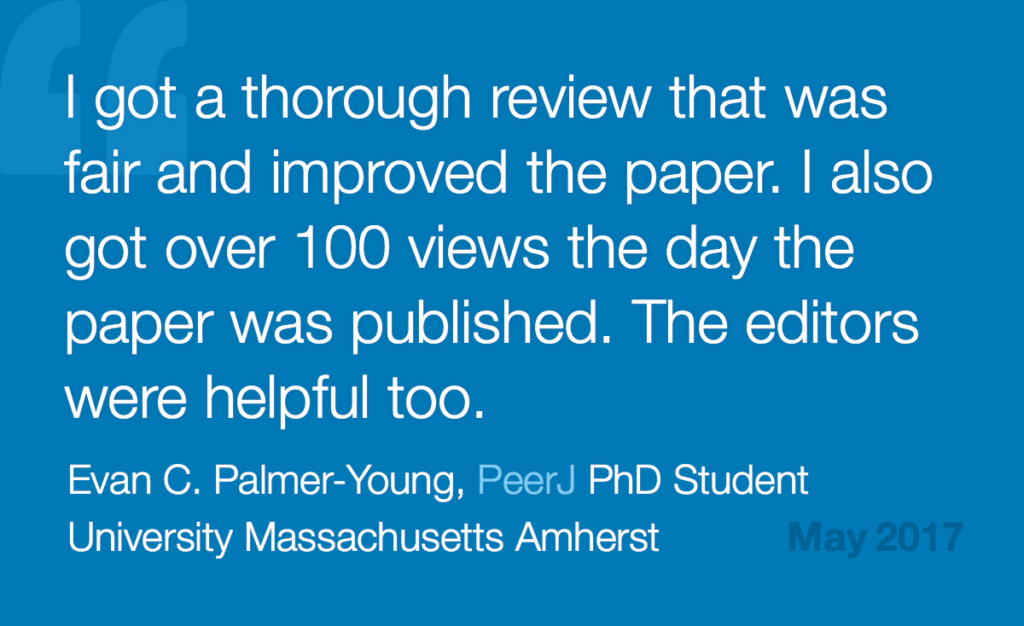 EPY: Sure. I’m grateful to my colleague Mostafa Elfawal, who taught me standard protocols for working with cell cultures, and to Professors Robert Wick, William Manning, and Jeffrey Blanchard, who have been very generous with sharing lab space and equipment, without which I could not have done this project. And my lab colleagues—we have a great group in the Adler lab. Also, I must thank the Garden Club of America, USDA, and NSF for providing me with funding.

Costa, C., M. Lodesani, and L. Maistrello. 2010. Effect of thymol and resveratrol administered with candy or syrup on the development of Nosema ceranae and on the longevity of honeybees (Apis mellifera L.) in laboratory conditions. Apidologie. 41: 141–150.

Graystock, P., D. Goulson, and W. O. H. Hughes. 2014. The relationship between managed bees and the prevalence of parasites in bumblebees. PeerJ. 2: e522.

Logan, A., M. X. Ruiz-González, and M. J. F. Brown. 2005. The impact of host starvation on parasite development and population dynamics in an intestinal trypanosome parasite of bumble bees. Parasitology. 130: 637–642.