Whale sharks are a majestic and endangered species on the IUCN red list whose numbers have been heavily impacted by human activity. As with many other oceanic species, there is very little known about their life history. Last week PeerJ published “Oceanic adults, coastal juveniles: tracking the habitat use of Whale Sharks off the Pacific coast of Mexico” by Deni Ramirez-Macias, Nuno Queiroz, Simon Pierce, Nicolas Humphries, David Sims and Juerg Brunnscheiller. Demi Ramirez-Macias talks about how tracking whale sharks off the Gulf of California has shown that mature individuals are less likely to visit coastal waters. 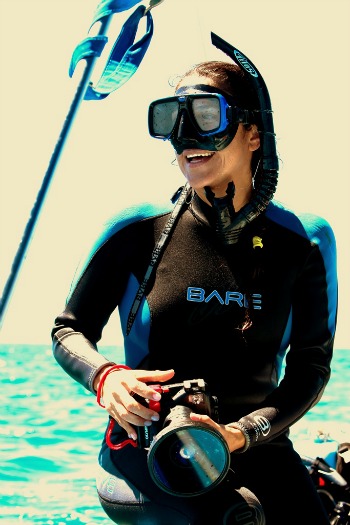 Deni Ramirez-Macias: I am Dr. Dení Ramírez, the Director of Whale Shark Mexico, a project of whale shark research, conservation and management and part of the NGO ConCiencia Mexico. I am from Mexico City and wanted to be a marine biologist because my parents were divers. Since my very first whale shark encounter I fell in love with these mysterious sharks way back in 1998 and I asked a professor for papers about these sharks. I found that there was such a little information about whale sharks. In college, I wanted to contribute to the knowledge and in 2001 I began my studies in the Gulf of California and continued in the Caribbean Sea of Mexico, the Archipellago of Revillagigedo, the Philippines, Utila and Peru. Whale sharks are very mysterious and my work has contributed to baseline research, population genetics, contaminants, population structure and migratory patterns. My research has also been used in conservation, as the generation of protected areas for the species and its management. (Right picture by Brian McGinnis) 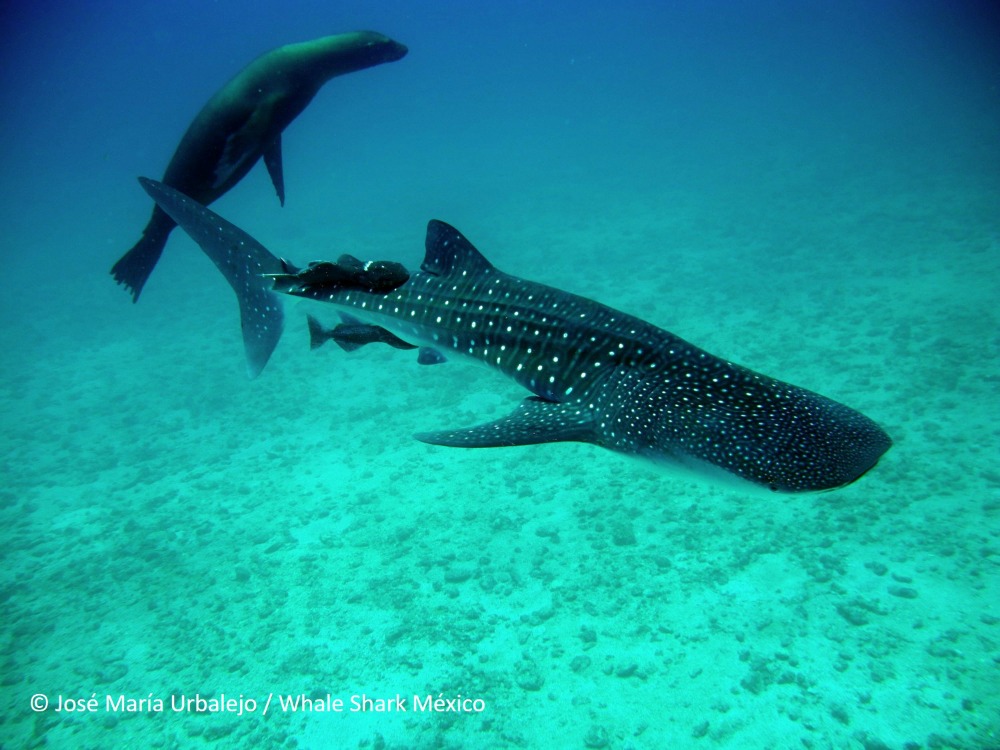 The regular presence of female sharks, almost exclusively pregnant, in deep waters in the southern part of the Gulf of California suggests that their presence is related to breeding. A very small, free-swimming whale shark pup was sighted at Espíritu Santo Island on 4 July 2015 to support this theory.

DR: My first tagging experience was near Holbox Island. We were tagging whale sharks with visual tags and in that area the whale shark average size is 6-7 m (mainly juveniles). Then I started tagging with satellite tags in La Paz Bay. Here the average size is 4 m (small juveniles). In both locations it was easy to tag them. In La Paz I was using a 90 cm spear gun with 2 bands to tag the juvenile sharks. With my previous experience in the collection of tissue samples from adults (with an average size of 11 m, mainly pregnant females) I knew their skin would be thick and it would probably be difficult to tag them so I acquired a 150 cm spear gun with 3 bands but I was afraid I would injure them so I decided to use 2 bands. 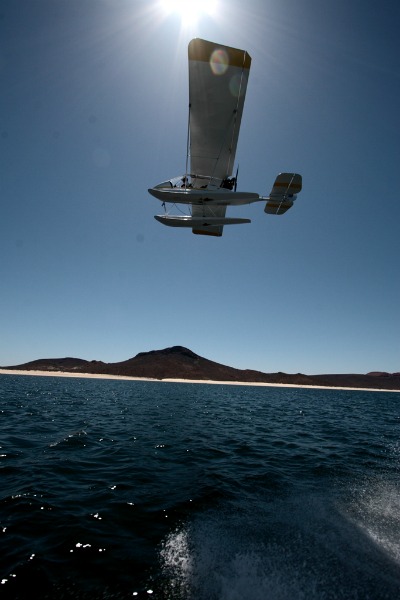 We used a spotting airplane to find the pregnant females and when the plane found the first female I jumped into the water and swam fast and did a deep breath to relax myself. I had adrenaline in my body and my heart was ready to explode! When I shot to tag her, she overreacted. I felt a strong current of water and moved forward as fast as I could and then I saw her huge tail (bigger than me, and I am 1.60 m) in front of me, WOW that was close! She really overreacted because normally they do not react at all for the tissue sample. In this case the tag bounced so I shot using 3 bands and the tag continued to bounce. It was so frustrating to have her in front. I remember the pilot calling me and saying there are around 8 pregnant females around! These numbers were high for them because normally you only see one or two per day. Anyway, it took us a while to tag her so we called Fé (Faith)! (Picture to the left by Carlos Aguilera)

Another nice experience was to tag Tikitiki, a juvenile female that has visited La Paz every year since 2006. When I received the notice that the tag had popped off near Bahia de Los Angeles because she dove 1285m I was amazed I wondered why she dove that deep! Seven months later I saw her in La Paz and I asked her why don’t you just tell me what you were doing so deep there? It was fantastic to think about all the things they do and face during their journey!

The last is about the only adult male I have seen in the Gulf of California in all these years of study – we called him Kukulkan. The pilot was flying and told me he saw a female that looked sick, and I asked him “why do you say that?” His answer was that she was long but very skinny then I told him maybe is a male because, with sharks, females are normally fatter than males. When we found him we confirmed that it was long male that looked pretty healthy to me! It is amazing that their morphology is different and from the sky the pilot now can probably see the gender of the adults! We collected amazing data – his migratory pattern was different than the females and he was diving more than them. This opened my eyes about why it is so difficult to find them. How can we study a shark in deep waters in the open ocean?

PJ: What is involved with the field work in a study such as this?

DR: Well, all my anecdotes were from the field! The success of such a study depends a lot on your skills in tagging: you must choose the right anchor, the right tagging gun, and swim fast! Normally pregnant females like the current and you only learn this with experience in field. Studying the whale sharks in the Gulf of California (named by Jacques Yves Cousteau the aquarium of the world) is fantastic and you can feel the life of the ocean, and the importance of its conservation. From sharks to rays, dolphins, Orcas, whales, marlins, our diversity is amazing!

DR: I have a great passion for studying whale sharks and for contributing in their knowledge. These sharks still hold a lot of mystery and to be part of solving some of them step by step is huge! To use this knowledge in their conservation is also very gratifying. In my public talks, I always explain the importance of the Gulf of California for the juveniles, they like the area. Can you imagine swimming with a shark and then swimming with the same shark the next year? This happens here because up to 60% of our juvenile sharks return year after year. This shows the importance of the place for them. The history is completely different for the pregnant females because we never see them again and this is why the main effort has been to tag them and learn more about their movements! 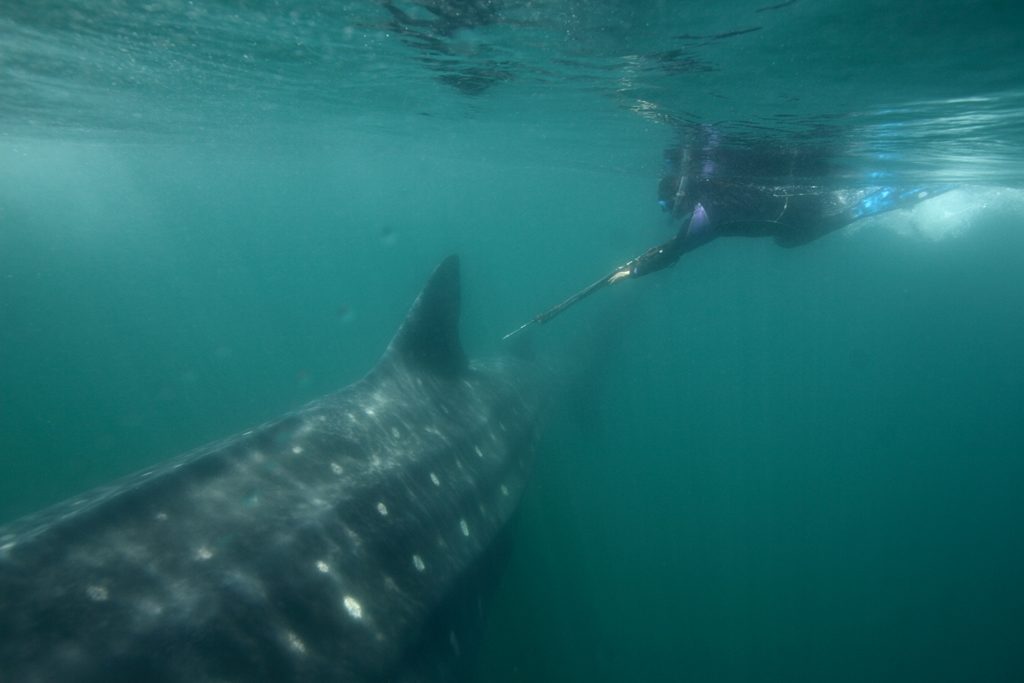 This place is also unique because here and the Galapagos are the only two places in the entire world where there are exclusive aggregations of pregnant females. We believed that they come here to breed and it is amazing that we now have the evidence of a whale shark pup in Espiritu Santo Island (were pregnant females aggregate) to confirm this belief! We can be very proud because this has been a mystery in all around the world – where are they born? In Mexico we have a huge responsibility in the conservation of this endangered species and its habitat and now I am working with the government to generate a new protected are for whale sharks.

PJ: What do you think the future holds for Whale Shark research?

DR: Our next step is to tag pregnant females in the Archipelago of Revillagigedo to see the next step in their migratory pattern. We also are studying sharks and would like to tag them in Peru. (Picture below by Carlos Aguilera)

DR: From colleagues, it is an open access journal with fast decision.

DR: Following the guidelines, the online submission process was easy. We faced some technical issues with our review PDF but the staff helped us resolve this issue. The review process was fast and after the first review they continued pushing and helping us publish. In general was a smooth process.