Marching for Science and the merits of putting a human face on our scientific efforts.

Last week, the global March for Science mobilized thousands of scientists and science-supporters around the world and received widespread media coverage. But what will be the lasting legacy of this action? PeerJ intern Alun Jones shares his experience attending the March for Science in London. He looks at how we can continue to build on the march’s momentum by making sure science remains in the public’s eye.

Alun is a BBSRC-funded PhD student at the University of Leicester studying bumblebee epigenetics and has joined the PeerJ team for 3 months as part of his university placement program. 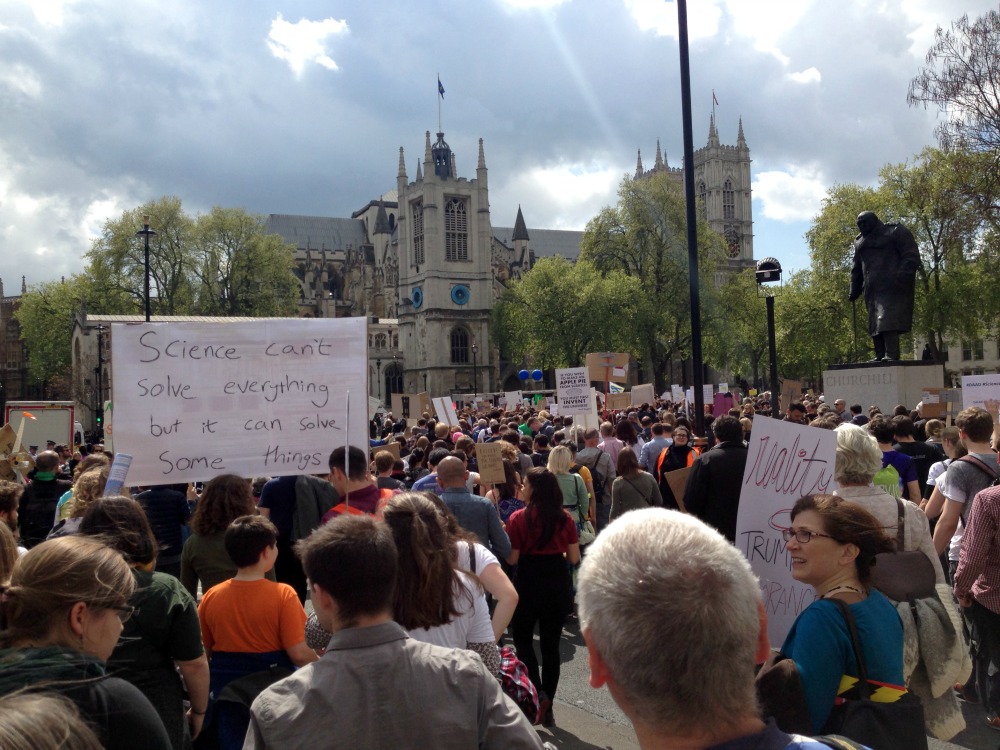 On the 22nd of April thousands of women, men, children, dogs and a Time Lord all took to the streets in over 600 cities from Washington to Kampala in the name of Science. People were marching for all kinds of reasons: cuts in science funding, attacks on climate change, vaccine deniers, evolution deniers, Brexit, and badger culls; but the overarching feeling behind the March was a more general concern that scientific facts and science itself is facing a lack of support in society.

I myself joined several NERC funded PhD students at the London march, all of whom were deeply concerned about climate change and the future of scientific funding. The march began outside the Science Museum, headed to Hyde Park, then followed down past Green Park and St James Park, finishing up in Parliament Square where speakers addressed the crowd. 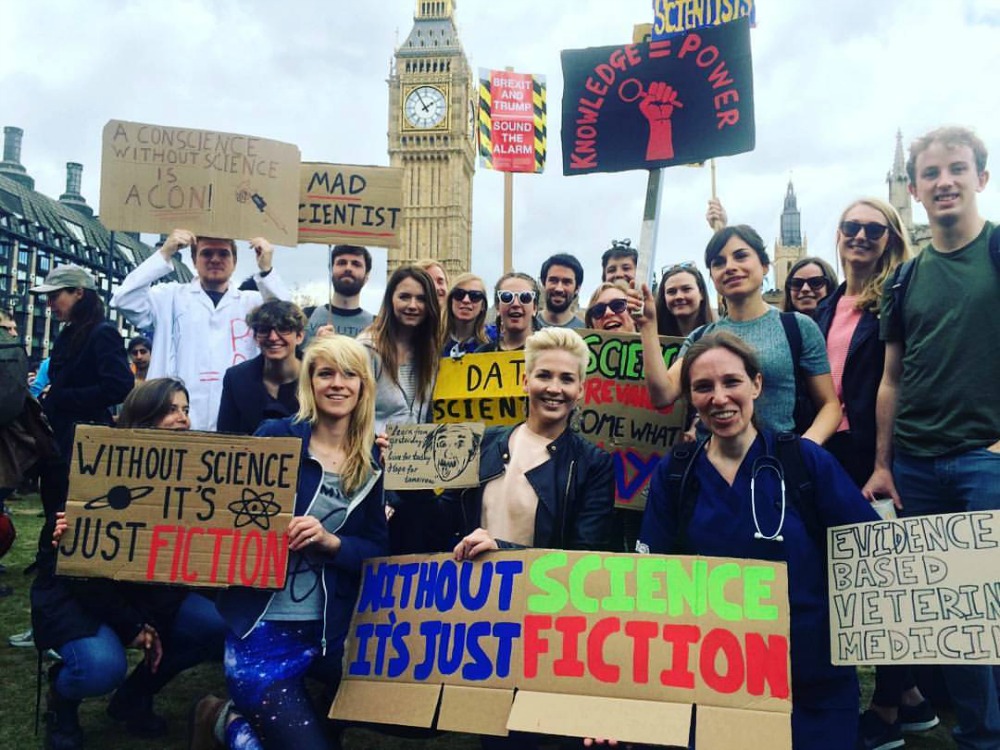 While the majority of scientists are political in some way, a common refrain amongst scientists has been ‘to let science talk for itself’. But in recent months, and especially with the Trump administration’s stance on federal funding cuts to science agencies in the US, many have felt this apolitical approach may not be enough. A global march was organised to make some needed noise on the situations facing scientists around the world and a call to take science seriously.

The main result of the London March was that it was reported (see also here, here, here). Marches all over the world were reported on news networks, newspapers and social media were filled with images and articles of marchers. I believe the nature of the march has gone some way to capturing the public imagination. Chants like:

“What do we want?”
“Climate Change”
“When do we want it?”
“Over appropriate geological timescales”

and witty signs that often made you think and then laugh. Signs such as “Data Scientist don’t hate a Scientist” with a phone number on the back of the sign.

These clever and inventive signs bring attention to the fact that thousands of scientists felt that it was necessary to stand up and voice their concern. Another positive effect of the march is that these efforts are humanising and help to overcome a perceived image of scientists as a few TV presenters and some nameless boffins in white coats spurting out statistics and looking down microscopes. It is easier to ignore the thoughts of a faceless group than it is real people.

Some have voiced the opinion that the march itself is not enough and could be ignored by the political establishment unless supported by voting initiatives, wider policy engagement and letters to political representatives backing science. Of course, the issues brought forward by the march have the potential to be just part of a single news cycle or simply ignored. For me, the bigger problem we face is that scientists are already involved politically – but this effort alone is not making a difference. It is the wider public that needs to be made aware of the issues scientists face.

So has the March Science changed anything? The simple answer is there is no real way of knowing yet, certainly not in any empirical way. President Trump on the 19th of April interviewed Peggy Whitson, a biochemistry researcher and former NASA chief astronaut, the timing of which while immediately suspect was also accompanied by a brief talk on STEM. He has also signed in two laws in February promoting women in STEM subjects at NASA and the National science foundation. However, there has been no response from his White House and no response from the UK government either about the March. But again, political wins were not the primary point of the March.

The consistent message shared by all marches was that science is not being taken seriously by society and politicians. Making science accessible to the public is more important than anything any politician can do. We can all continue to build on the momentum of the March for Science by making sure science is in the public’s eye. Scientists going on YouTube and explaining the latest discoveries, the hundreds of scientific blogs discussing their lives as researchers, and scientists publishing in open access journals all work to break down these barriers. The results of these public-facing activities will mean scientific ideas are taken more seriously when it comes to election day.

Note: This article gives the views of the author, and not necessarily the position of PeerJ.