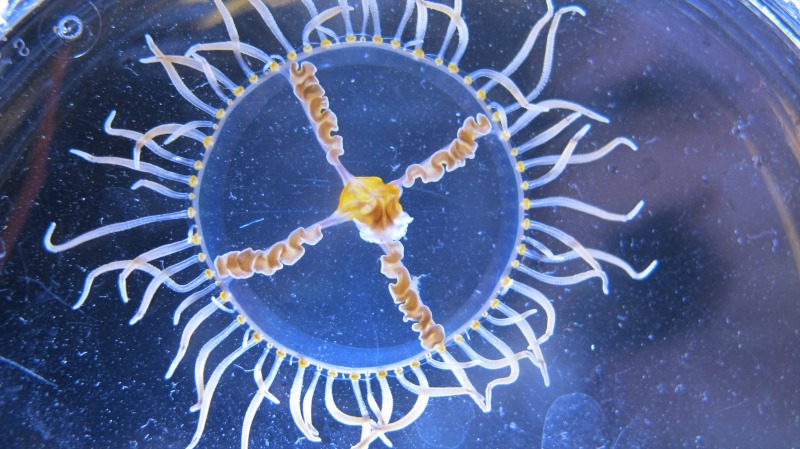 For such small and delicate creatures, they can pack mighty painful stings. Known as clinging jellyfish because they attach themselves to seagrasses and seaweeds, Gonionemus is found along coastlines in the Pacific and Atlantic oceans, and in particular in waters near Vladivostok, Russia. Exactly how these jellyfish, long assumed to be native to the North Pacific, became so widely distributed throughout the world has perplexed researchers for decades.

Interest in the jellyfish has renewed in recent years, when stings with symptoms similar to those previously described off of the Russian coast— including severe pain, respiratory and neurological symptoms—suddenly started occurring in Cape Cod and nearby regions.

Now, the first genetic study of the diversity of clinging jellyfish populations around the globe has discovered some surprising links among distant communities of jellies and also revealed there may be more than one species of the infamous stinger. The paper published April 18 in the journal PeerJ (https://peerj.com/articles/3205/).

Annette Govindarajan, a biologist at Woods Hole Oceanographic Institution (WHOI) and lead author of the paper, has studied these jellies for the past three years with the ultimate goal of tracing the species’ origin off the U.S. East Coast, where it is thought to be invasive. 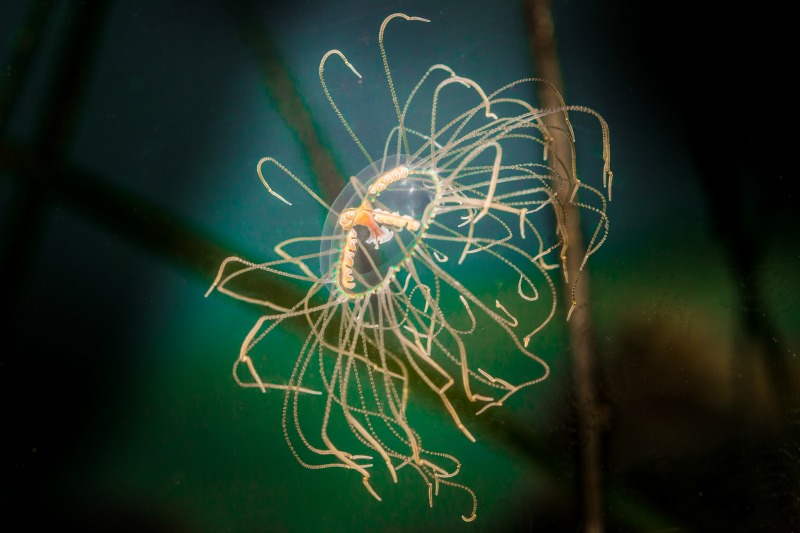 The clinging jellyfish first appeared in the Cape Cod area in 1894. Scientists in Woods Hole studied the clingers in the early 1900s. Following an eelgrass die-off, their numbers dwindled. Then the tiny creatures, whose sizes range from about the diameter of a dime to a quarter, nearly vanished in the 1930s. Prior to that, says Govindarajan, researchers and others who were handling the jellies in Massachusetts made no reports of stings.

“The Cape Cod populations were assumed to be a variety that didn’t cause severe stings,” Govindarajan adds. It wasn’t until 1990 that the clinging jellyfish re-appeared in Cape Cod and painful stings were first reported. These observations lead Govindarajan and her colleague, WHOI researcher Mary Carman to suggest in a previous paper that an invasion from a toxic population had occurred.

The new study shows that the story is much more complex than previously thought. The researchers uncovered a genetic match between populations of clinging jellyfish in the Vladivostok, Russia-area—specifically the area well known to cause severe sting reactions—and those found along the U.S. East Coast in the Northwest Atlantic.

“We know the two regions share one genetic variant or haplotype,” Govindarajan says. “In the Northwest Atlantic, this variant was actually most frequently found in eastern Long Island Sound. The details about how and when an invasion, or possibly multiple invasions, occurred aren’t clear. Interestingly, we also found evidence that both regions may contain native forms.” 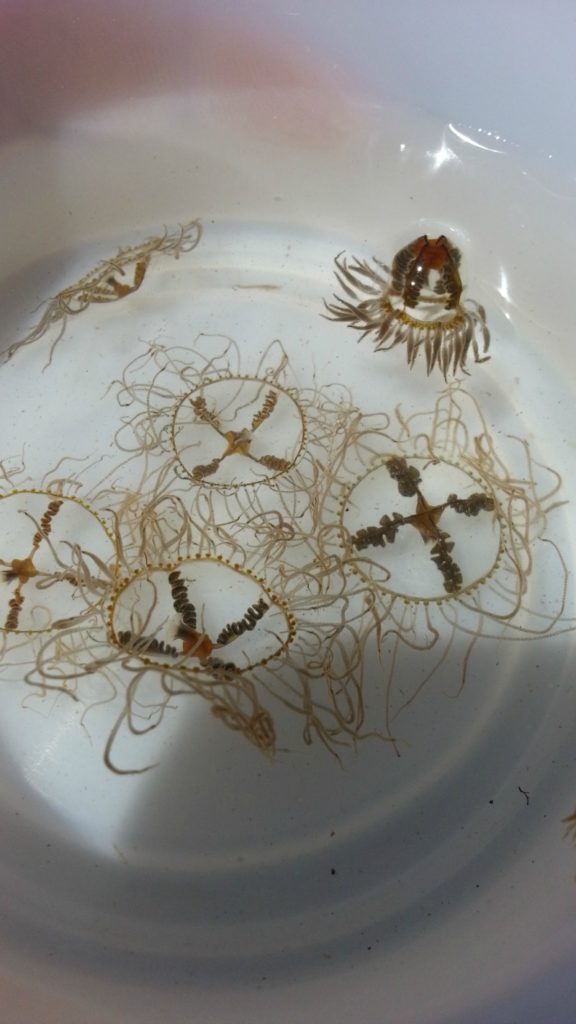 Working with Carman and colleagues Marat Khaidarov and Alexander Semenchenko from the A.V. Zhirmunsky Institute of Marine Biology, National Scientific Center of Marine Biology, Far East Branch, Russian Academy of Sciences in Vladivostok, Russia, and John Wares from the University of Georgia, Govindarajan obtained tissue samples for DNA sequencing. The jellyfish samples came from several Atlantic and Pacific locations. Their analysis identified seven variants, some of which were specific to only one location, and others that were shared among communities in distant locations. Interestingly, jellies from the Northeast Pacific and Northeast Atlantic locations shared a haplotype that was sufficiently different from Northwest Atlantic and Northwest Pacific jellyfish, which suggests the possibility that the two related groups may represent different species of Gonionemus.

“In the past, some people have suggested that the Atlantic and the Pacific jellies were different forms,” Govindarajan says. “Others have suggested that jellies in the Atlantic were introduced from the Pacific. But what we found doesn’t correspond exactly to either hypothesis. And it could be that what we have in the Northwest Atlantic and Northwest Pacific is not Gonionemus ‘vertens’ at all, as it has been called, but some other species of Gonionemus.”

“The study documents what we suspected, that there are different types of Gonionemus jellies and some of these types co-occur in New England,” says coauthor Carman. “Some types seem to have a toxic sting to people and some do not.” 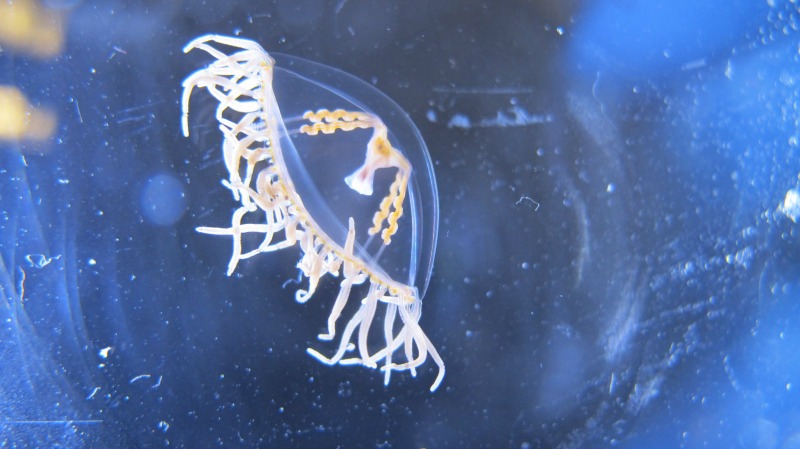 While the animals bloom in the summer months, beginning in June through September, Govindarajan says swimmers and beachgoers shouldn’t be overly concerned as the fragile stingers are not found along sandy beaches in high-energy areas where there are waves.

“Unlike other jellies, it is unlikely that these would be in open water,” she says. “We only see them in areas with eelgrass or seaweeds since they’re able to cling to these surfaces with the sticky pads found on their tentacles.”

The lack of movement in open waters also makes the mystery of how the different varieties have become so widespread even more intriguing. The jellyfish are produced by microscopic polyps that are only about a millimeter or less in size, which Govindarajan says is a stage where they could easily hitchhike on a blade of eelgrass, an oyster shell or even a boat hull.

“At that stage, they’re so tiny,” she adds. “To find them is like finding a needle in a haystack.”

Govindarajan and her coauthors hope to obtain funding to do additional genomic analyses that will give greater resolution and suggest genetic markers to help reveal more about the species and its toxicity. They hope this will lead to a better understanding of how invasive forms of the jellyfish are dispersing, so that further spread can be prevented.

“With this study, we answered some questions, but it also opened up many others,” says Govindarajan. “That’s part of the scientific process. It’s what makes it for me, personally, very interesting. I feel like I’m solving a mystery.”

Link to the Published Version of the article: https://peerj.com/articles/3205/

The Woods Hole Oceanographic Institution is a private, non-profit organization on Cape Cod, Mass., dedicated to marine research, engineering, and higher education. Established in 1930 on a recommendation from the National Academy of Sciences, its primary mission is to understand the ocean and its interaction with the Earth as a whole, and to communicate a basic understanding of the ocean’s role in the changing global environment. For more information, please visit www.whoi.edu.

PeerJ is an Open Access publisher of two peer-reviewed journals and a preprint server. PeerJ is based in San Diego, CA and the UK and can be accessed at https://peerj.com/. PeerJ’s mission is to help the world efficiently publish its knowledge.

All works published in PeerJ are Open Access and published using a Creative Commons license (CC-BY 4.0). Everything is immediately available—to read, download, redistribute, include in databases and otherwise use—without cost to anyone, anywhere, subject only to the condition that the original authors and source are properly attributed.

PeerJ has an Editorial Board of over 1,400 respected academics, including 5 Nobel Laureates. PeerJ was the recipient of the 2013 ALPSP Award for Publishing Innovation. PeerJ Media Resources (including logos) can be found at: https://peerj.com/about/press/