This study used a variety of remote sensing tools to document and digitally record 3D data on dinosaurian tracksites in the Dampier Peninsula, Western Australia. These methods, including high-resolution aerial photography from drones and manned aircraft, allowed the team to overcome previous documentation problems such as tracks in intertidal zones and the remoteness of sites, producing in-depth data from the millimetre to the kilometre scale. 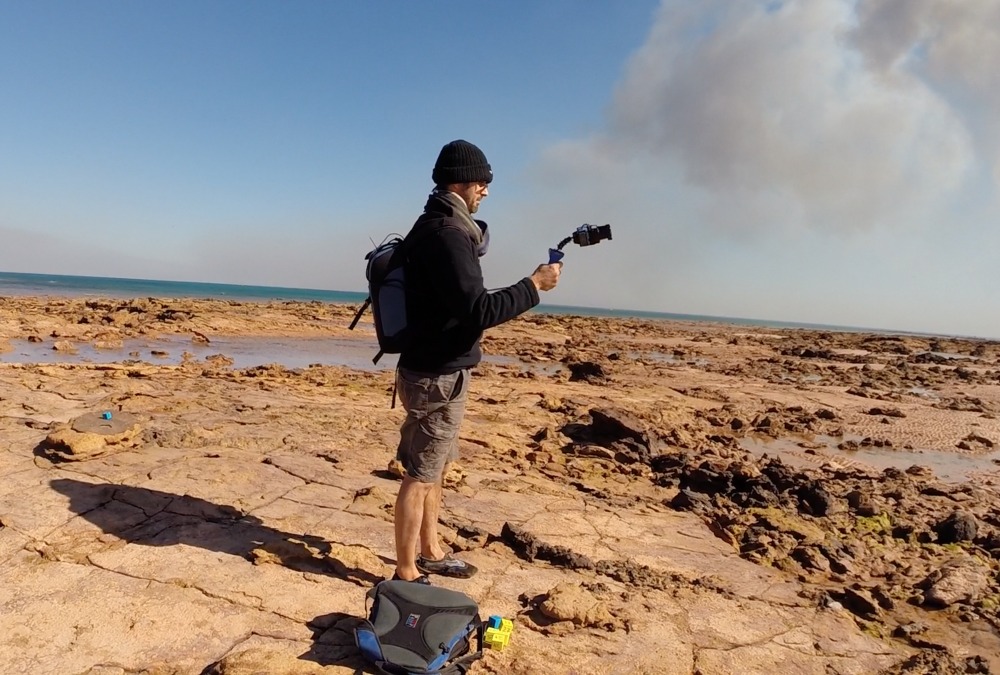 To hear more on the findings and implications of this research, we interviewed corresponding author Anthony Romilio for the PeerJ blog. He discusses how the team digitally recorded the 3D topography of the Kimberley dinosaur tracks, ongoing science education efforts, and some professional hazards of working in a living reef system.

AR: I am a post-doctoral researcher at The University of Queensland (UQ), Australia (Dr SW. Salisbury’s Dinosaur Lab) where I use a range of 3D modelling techniques (photogrammetry, laser, CT) in the study of dinosaur tracks and for the development of  3D visualisation platforms for UQ courses. I became involved in studying fossil track research in 2009 when I began reevaluating the Lark Quarry dinosaur tracksite in Queensland that prior to my research was regarded as evidence for a mass synchronised movement of hundreds of dinosaurs or ‘dinosaur stampede’.

Our lab’s involvement in researching dinosaur footprints in the Kimberley, Western Australia, began in 2011 when we were invited by the Goolarabooloo (an aboriginal community in the Kimberly region of Western Australia) and local Broome dinosaur trackers to investigate the coast’s dinosaur track-bearing platforms that were designated for destruction as part of the development of a $45 billion liquid natural gas plant and marine port. Since that time, this industrial development has been withdrawn and the dinosaur tracks are now National Heritage Listed.

AR: The ‘Dinosaur Coast’ of Western Australia provides several challenges to dinosaur track investigators. The intertidal zone in which they occur is very extensive, with more than 70 tracksites discontinuously distributed along more than 100 kms of coastline. Added to this, for most of the year these track-bearing platforms are submerged underwater, often by more than 10 metres, and are only exposed at extreme low tides for a few hours. 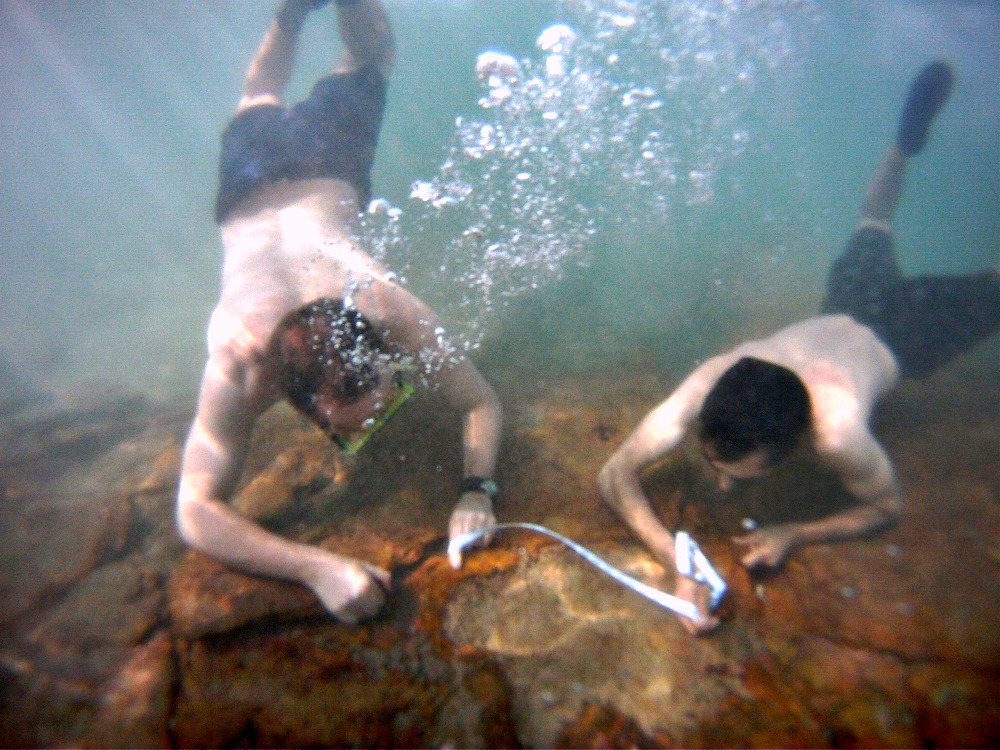 Our PeerJ report describes a number of fieldwork data acquisition methods we use to address these challenges,  showcased at the relatively small (only 24,000 square metres!) dinosaur track site at Minyirr (Gantheaume Point) known to palaeontologists for more than 60 years. The data collection methods include the use of handheld cameras and lasers, remotely flown drones (UAVs), and light aircraft that function as an aerial laboratory.

These techniques rapidly collect information across relatively large areas and provide highly detailed data ranging from the sub-millimetre (permitting accurate footprint shapes) to multi-kilometre levels (allowing perspectives of adjoining tracksites), which can be integrated to gain a comprehensive evaluation of these tracksites. Several of these new ways of digitally recording the 3D topography of the Kimberley dinosaur tracks the sites have even been invented by several members our coauthor team.

AR: The coast and landscape of west Kimberleys is picturesque, but you have to keep your eye on the ocean. Once the tide turns (and it does so quickly) you can find yourself having to wade your way back to shore. We work in a living reef system. We see corals, many species of fishes, sea turtles, and more. Some are less friendly neighbours include sharks, stonefish, and at one time a four-metre crocodile appeared at one of our tracksites.We’ve camped amidst thousands of nocturnal hermit crabs, bush fires, and ventured to off-shore sites in a boat that leaked heavily and had engine problems. 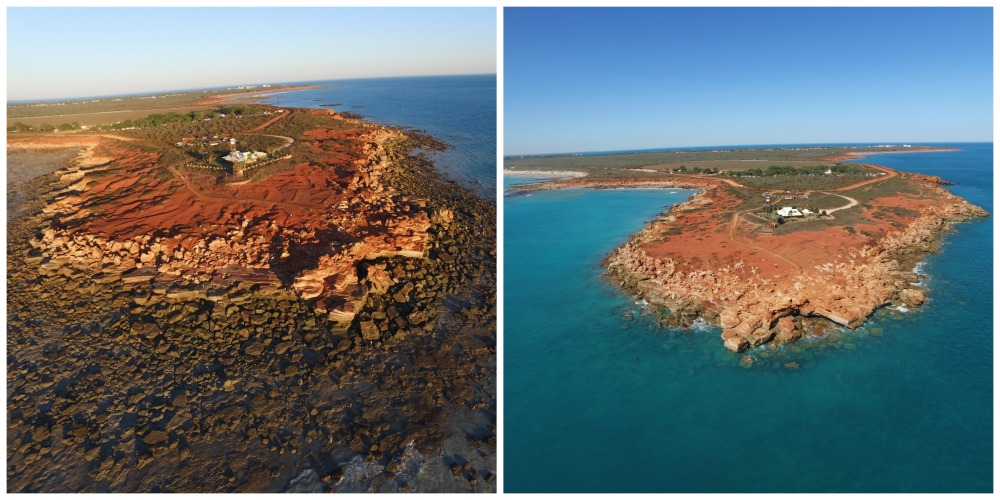 Minyirr, where our report is based, is very popular with visitors during the tourist season (April–October), and is the cooler times of the year when we conduct fieldwork. Instead of hampering our investigations and data collection of the site, we see many visitors to these sites as an opportunity to educate the public on our roles as palaeontologists and on the palaeofauna of the area from 130 million years ago. We do marshal groups away from areas we are immediately collecting data only to then return to these areas once done with a guided tour of these fossils. People are very excited to be shown the footprints and some even help us clean the debris and sand from the track surfaces. 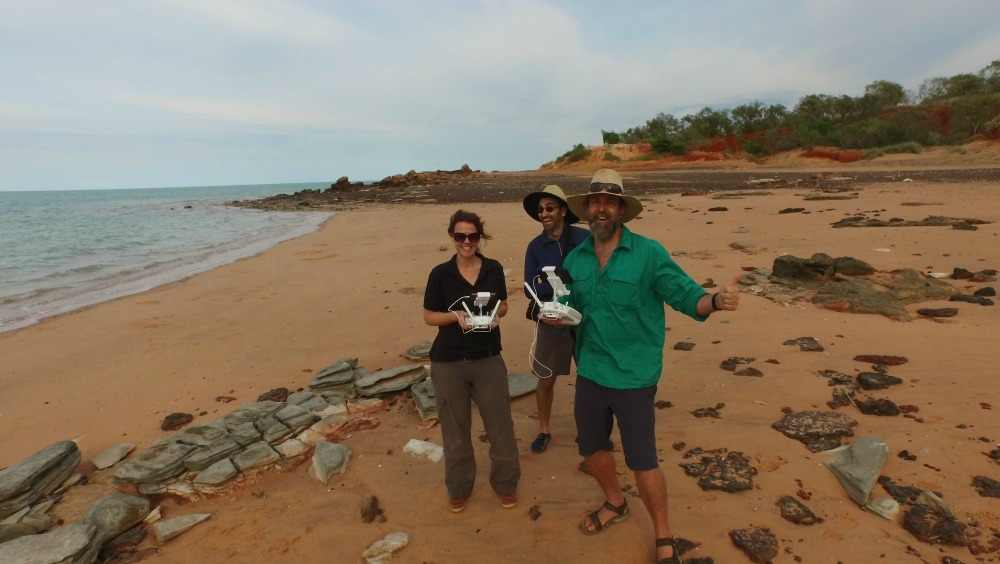 AR: Dinosaur tracks are abundant along the Kimberley’s ‘Dinosaur Coast’. This extraordinary and very beautiful environment provides an enormous amount of information about the dinosaurs of 130 million years ago, a time period for which we have no other Australian record of this fauna. The challenges that have hampered eariler palaeontological research have now been addressed through our multidisciplinary scientific team of atmospheric researchers, sensory robotists, mining environmentalists, and palaeontologists.

All of the dinosaur tracks shown in our PeerJ report are new to science. While dinosaur tracks at Minyirr have been scientifically recognised for more than 60 years, the environment in which these occur is highly dynamic and ever-changing. New tracks are exposed through the erosive wave action but will eventually be lost by the same process. Another advantage of the methods described in our report is that they have enabled us to quantitatively examine all of the ‘Dinosaur Coast’, and over time we will be able to monitor its condition. 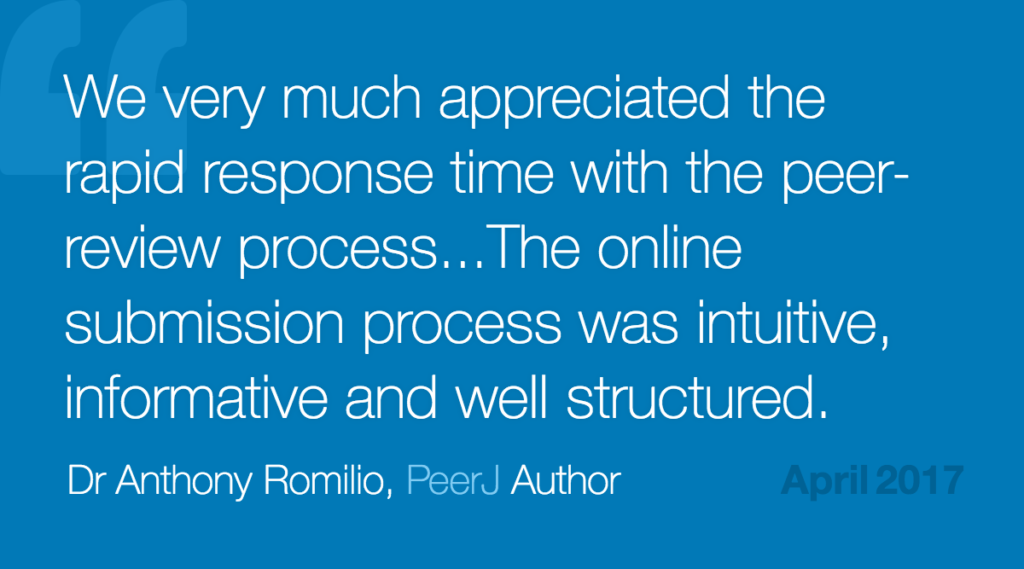 AR: Several members of the UQ Dinosaur Lab are Premium members with PeerJ and spoke very highly of the journal.

AR: We very much appreciated the rapid response time with the peer-review process and conversing with the editorial team. The online submission process was intuitive, informative and well structured. I would describe this as a good experience.

AR: Definitely – yes to both points.