Today we published “Boxer crabs induce asexual reproduction of their associated sea anemones by splitting and intraspecific theft” by Yisrael Schnytzer, Yavin Giman, Ilan Karplus and Yair Achituv. This is a fascinating and elegant study which shows that Lybia boxer crabs (which carry two sea anemones, one in each claw) will fight each other to steal a sea anemone from a fellow crab, and then split their sea anemone into two identical clones. This appears to be a unique example of one animal inducing the asexual reproduction of another, consequently also affecting its genetic diversity.

To get some of the background to this study, we interviewed Yisrael Schnytzer for the PeerJ blog. 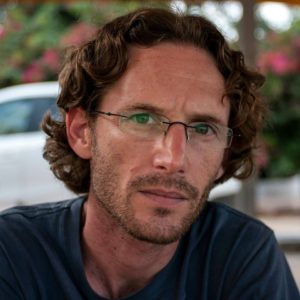 YS: I am currently a post-doc at the Marine Biological Laboratory in Woods Hole, working on cephalopod RNA editing and behavior. Prior to that I conducted my PhD at Bar-Ilan University in Israel. I studied the behavior and underlying molecular mechanisms of tidal rhythmicity, a theme which I intend on developing in my work. Before that, as part of my master’s degree, also at Bar-Ilan University, I spent a few years studying the fascinating association between boxer crabs and the anemones they hold in their claws. So, I like to keep things interesting and diverse.

YS: From the beginning of my work on the boxer crab – anemone symbiosis, my co-authors and I were puzzled as to how the crabs obtain their anemones in the wild. Every crab we observed in the wild, large and small, were found holding a pair of anemones. Yet, over the course of several years searching in a fairly small area we were unable to find a single free living anemone of the species held by the crabs. This lead us to perform a series of laboratory experiments aimed at shedding light on this puzzle. We first took crabs from the wild and removed one of their anemones, which consequently led to the crabs splitting the remaining anemone into two new ones. We then placed a crab with anemones together with one lacking them (removed by us). The crabs would then proceed to wrestle and fight, and more often than not, the one lacking anemones would steal one from the other. After which each would proceed to split their anemones as aforementioned. We hypothesized that if stealing and splitting are indeed part of the anemone acquisition “mechanism” in the wild, then we would expect to find that each pair of anemones held by a crab would be identical clones. So we conducted a genetic fingerprinting of pairs of anemones taken from wild caught crabs. Indeed, each pair were found to be clones, supporting the splitting hypothesis. Furthermore, we only found three anemone haplotypes, suggesting that they may indeed be quite rare and that theft would invariably play a role at their dissemination amongst the local boxer crab population. 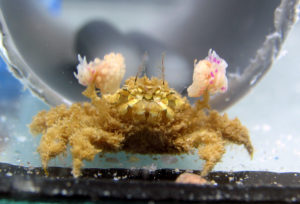 YS: Tons. Collecting the crabs for this study involved a lot of field trips down to the lovely town of Eilat on the Red-Sea shore, endless hours snorkeling around the tidal zone turning over rock after rock looking for the crabs. One time, the tide was so low that I was literally laying on my stomach turning over rocks. All of a sudden I could feel something moving around under my chest and stomach area…so I moved away, only to discover I had been lying on top of a highly venomous stonefish! Luckily, I was wearing a pretty thick wet suit. Often when occupied with the collection I would get the distinct feeling I was being watched…would turn around to see an octopus peeking from behind a boulder, just curious at what we were doing. Another time Yaniv and I forgot the car keys in the car, so there we are standing in soaking wet suits, holding containers of freshly caught crabs, outside our rental car wondering how we will get out of there…. 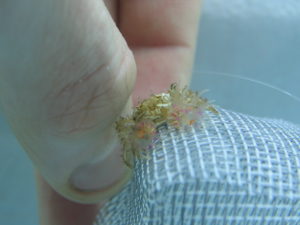 YS: This is a basic science study, driven by our curiosity and need to understand how things work out there. What the other inhabitants on this planet get up to. I could tell stories about potential benefits of understanding symbioses and how we may be able to utilize that, or how studies like this promote care for wildlife and so on. But I don’t really believe that. I just study these guys because they are cool and I want to know what they do and how they do it.

YS: My first experience with PeerJ was as a reviewer. So I got to know the process and style during that experience. Then when looking for a journal to publish our current work we wanted to find a journal with broad readership, open access and a reputable name. PeerJ fit the bill perfectly.

PJ: And how was your experience with us?

YS: Everything went very smoothly. The submission process, format and so on were very user friendly. On the occasion that I had a question, both as reviewer and author, the staff were very fast to reply and solve my problem.

PJ: Would you submit again, and would you recommend that your colleagues submit to PeerJ?

YS: Yes, I will certainly submit here again. One of the things I have liked the most is that once the paper was accepted the publication process has been very fast and the effort on part of PeerJ to generate a large impact, through a press release and this blog, is of much value to my scientific career.

PJ: We wish Yisrael every success in his future studies, and we encourage other researchers to aso submit their best work to PeerJ!