We recently published “Arthropods of the great indoors: Characterizing diversity inside urban and suburban homes”. In this study, author Matthew A. Bertone, and his colleagues examined discuss the results of a study on Arthropods found inside US homes.

Matthew comments on his research and experience publishing with us.

MB: I am an entomologist with a life long passion for the weird and creepy in nature. I fell in love with arthropods when I was five years old because they are an extremely diverse and fascinating group. My professional career as an entomologist started when I was a graduate student at NC State University studying dung beetles in local cattle pastures. I then pursued a PhD at the same school, focusing on the molecular phylogenetics of a large group of true flies (Diptera) that contains examples like mosquitoes, crane flies, midges and fungus gnats. I was then involved in two postdoctoral research appointments, one focused on defining the anatomy of wasps and kin (Hymenoptera), and the other doing the research presented in PeerJ. I am also an avid macrophotographer, among other hobbies.

MB: We published a paper describing the diversity of arthropods (insects, spiders, centipedes, isopods, etc.) we collected from local urban and suburban homes. We recovered both living and dead arthropods and found over 10,000 specimens total, representing at least 579 morphospecies. Some of the species could be identified, but others were considered morphospecies based on how different they appeared compared to others from the same room. Twelve families of arthropods were found in over 80% of homes. Many of the specimens represented groups that are not likely to live in homes for long periods of time, and were accidental arrivals. The most common types we found that live their lives in homes were cobweb spiders, carpet beetles, book lice, dark-winged fungus gnats, and cellar spiders. 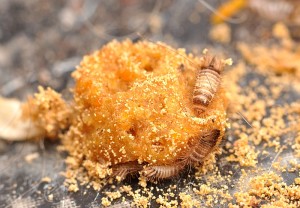 MB: It was really great to have so many enthusiastic homeowners volunteering to let us come in and sample these creatures – especially since many people would rather not know what they live with. Many people were afraid of us finding brown recluses, which are not native to the area. But the fear associated with that type of spider was enough for them to want to know whether they had them; luckily we didn’t find any brown recluses.

During the process I came face to face (or face to carapace, face to frons, depending on the arthropod) with some very interesting critters. I saw flies that were emerging from a rodent killed by a house cat. I saw spitting spiders, one of my favorite spiders and very unique at that, thriving in a few homes. We even collected a number of insects rarely seen even in the wild. We mentioned some of these and other findings in the paper. 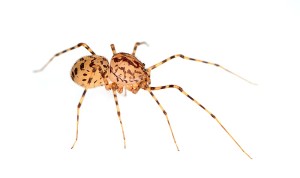 MB: I was most surprised by the number of specimens we were able to collect and that some groups were not only found in all homes we sampled, but the majority of rooms. Things like carpet beetles and cobweb spiders seem hard to avoid indoors, but luckily they are small or secretive.

MB: Despite people thinking they can seclude themselves from all of nature, animals and other organisms will find a way to live among us. I don’t think that’s a bad thing. We certainly do not want people with pest issues to accept it – instead they should seek help when necessary. But the majority of things living in homes do not harm us and are rarely seen. There may even be advantages to having this type of “ecosystem” in the home, although we are still trying to figure out the major implications. Hopefully this study will be a base off which we can pursue other questions.

MB: We have a number of ideas of what we would like to know, and I feel that this paper being very exploratory only created more questions. For instance one thing we are looking at is the relationship between the green spaces around homes and the arthropods found indoors. From the start we also wanted to know whether house characteristics (age, size, etc.) and the behaviors or characteristics of the residents affect the diversity of what we found. I think in the future it would also be important to know what kinds of microorganisms these arthropods harbor, and if there are any evolutionary or adaptive traits unique to arthropods that are found indoors compared to their wild relatives.

MB: My colleagues had published in the journal so they mentioned it and after looking around we decided that this seemed like a good up-and-coming journal. We also wanted this to be open access, because our audience was the public as well as scientists.

MB: It was quick and pretty straight forward. The reviewers were chosen quickly and I got the paper back well before I thought it would be returned. The reviewers varied in their assessments, but that was good for the end product. I was particularly happy that the format was pleasing and the step by step submission process was easy to understand.

Join Matthew and thousands of other satisfied authors, and submit your next article to PeerJ.