Today we published “Ship noise extends to frequencies used for echolocation by endangered killer whales”. In this study, author Scott Veirs, and his colleagues discuss the results of a study on how sounds produced by ships are at frequencies which affect killer whales echolocation.

Scott comments on his research and experience publishing with us.

SV: I’m a marine environmental scientist based in Seattle, specializing in bioacoustics — the study of animals and sound. I enjoy skiing, backpacking, and playing ultimate frisbee with my wife and two tweenagers. I’m dedicated to teaching — both as an oceanographer and as an ultimate coach. 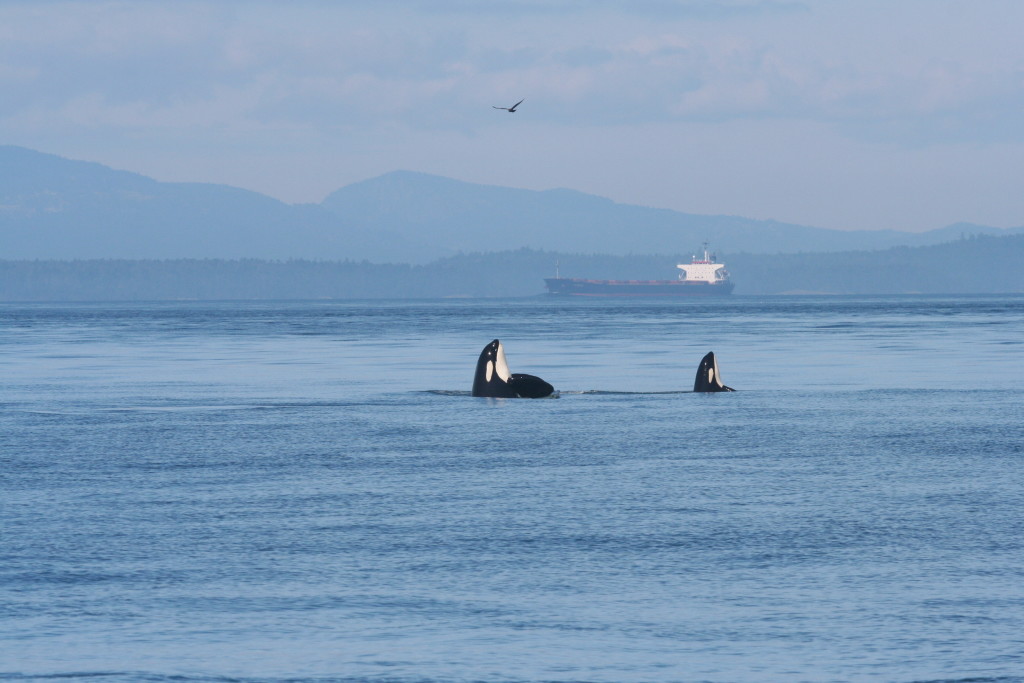 Endangered killer whales eye an oil tanker. Two endangered Southern Resident killer whales rise in unison from the Salish Sea as a tanker passes through their critical habitat along the Canada-U.S. border.

SV: We measured how loud ships are underwater. It turns out they are really loud at low frequencies, but they also produce significant noise at higher frequencies. Some types of ships emit much higher intensity noise than others and there’s a lot of variability within each of the 12 classes of ships we examined. Container ships are the most intense at almost all frequencies; military ships have some of the lowest noise levels.

This means that in coastal environments where marine life often lives in or near shipping lanes, ship noise may interfere not only with the communication of marine mammals, but also their echolocation — high-frequency pulses used to find prey. Our unprecedented characterization of ship noise (~3,000 measurements of ~1,500 unique ships) should help model potential impacts on a wide range of marine species and may also suggest ways to mitigate underwater noise pollution.

SV: Listening over the last decade to the live hydrophones we maintain (orcasound.net) we realized that noise from ships dominates the ocean soundscape near Seattle. A ship passes almost once an hour, 24/7 throughout the year! This made us worry about the effects such chronic noise might have on our local wildlife, particularly endangered killer whales that are highly vocal and are already challenged to locate scarce salmon.

SV: The 12 classes of ships form two groups if you look at the intensity of the low-frequency noise they emit. We didn’t expect to see that grouping and we’re still trying to figure out what is causing it. Are we hearing more cavitation from ships that are rushing to and from port? Or are the noise differences explained by engineering or operational parameters we’ve yet to assess? 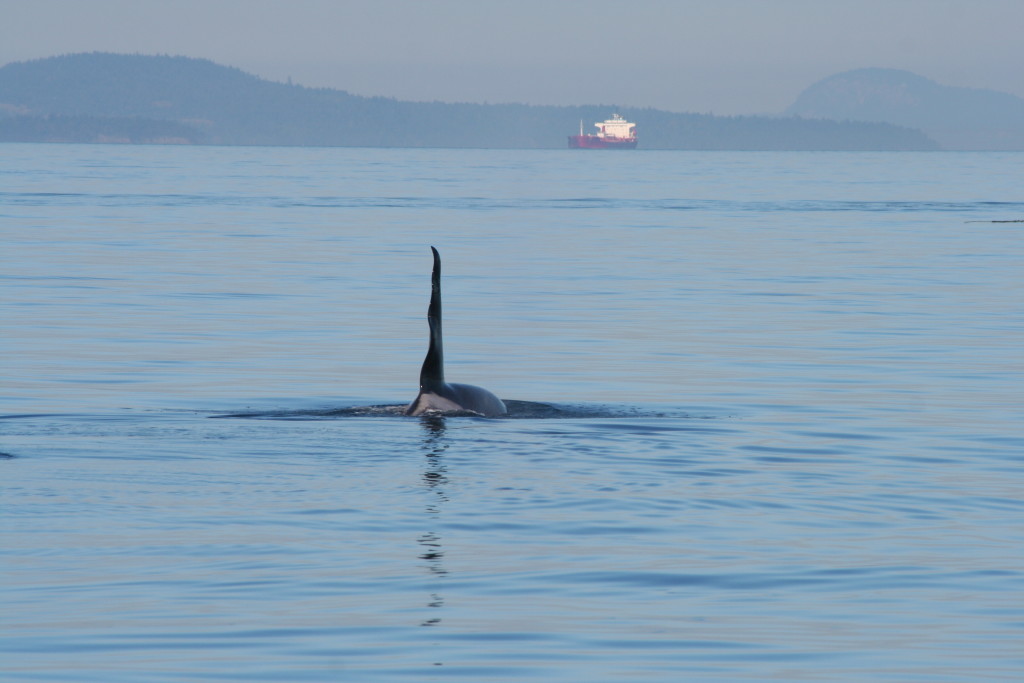 Does ship noise interfere when orcas use sound to search for salmon? The male orca “Ruffles” uses echolocation to find his favorite food — Chinook salmon — as a tanker approaches him in Haro Strait, WA, USA.

SV: Commercial shipping (in which almost all of us are complicit as consumers) may have environmental costs that we haven’t fully grasped. Ships are one of the major sources of noise in the ocean and may grow to dominate many marine soundscapes if the growth of the global fleet is unchecked. The good news, though, is that it may be possible to mitigate much of the ship noise, either by transferring quieting technologies from military to commercial fleets, or making operational changes — like slowing down.


PJ: Where do you hope to go from here?

SV: Now that we have a robust statistical characterization of noise from the local ship population, we would like to re-evaluate the potential impacts of this noise on select species of the Pacific Northwest. In particular, I would like to model more carefully the potential masking of killer whale echolocation clicks by vessel noise. I hope such a model will help us predict and/or measure the biological effects of ship noise on our local, endangered killer whales, as well as other marine species.

SV: In mid-2013 I was looking into open science and open peer review. I got an email from @ppandelis one of the developers of the LIBRE open peer review platform which essentially said, “we’re not ready, try PeerJ.” Eventually, as someone who enjoyed writing a PhD thesis in LaTeX, I gravitated to a work flow that included Overleaf (back when it was WriteLaTeX) — in part because it partnered with PeerJ to streamline the submission of .tex and supporting files. It also helped that my alma mater, Stanford University, put in an early vote of confidence for PeerJ.

SV: It was really cool to just press the “Submit to PeerJ” button in Overleaf and have a good bit of the submission process happen auto-magically. It was also really refreshing when a couple of our reviewers took the non-anonymous option. I’m please to know the many good ideas they shared with us will be openly acknowledged and citeable.

SV: Early on I was surprised to win a PeerJ t-shirt in a Twitter contest. I’ve been wearing it proudly ever since!

SV: It took a good bit longer than the projected 22 days, but ours was a long article and the review process straddled the U.S. winter holidays. I think it took a little longer than normal to find responsive, relevant reviewers, but the outcome was positive. We received rigorous, thoughtful reviews that made the paper stronger.

SV: Yes, we shared a pretty early pre-print (published 2 Apr 2015) and got two thorough reviews from close colleagues that resulted in major changes to the manuscript. Sharing some of our preliminary results via the pre-print option was well-received by our scientific community, and there were even a few citations of it in the grey-literature.

I’m looking forward to hearing what colleagues think of the final accepted manuscript, as well as the more open approach that PeerJ offers.

SV: Definitely. I’m always curious about other solutions, but the PeerJ membership model is very attractive to me as an independent researcher operating through a small non-profit.

SV: I am so ready for scientific reputation to gain value on the Internet. PeerJ and other open-access journals make it easy to share scientific results, but alt-metrics are not yet sophisticated enough for the hard work that each PeerJ paper represents (by authors, reviewers, editors) to translate into societal trust.

When I comment (as a scientist) within a social network like Facebook or Youtube, my opinion should carry more scientific credibility than a non-scientist, or — Gods forbid — a non-scientific denier. I’m ready for a metric like Researchgate’s “RG score” that integrates our scientific contributions and success.

PeerJ could develop a similar metric that could be an additional input into a web-wide scientific rank. I was surprised to see none of my community use PeerJ’s pre-print Feedback or Questions functionality (and I’ll try to promote their use with the accepted paper), but if and when such interactions become commonplace, an ecology of scientists and PeerJ readers could inform a new metric through not only Visitors, Views, and Downloads, but also quantification of Feedback and Questions from the PeerJ + community, including the authors’ responses to and rating of that community.

Join Scott Viers and thousands of other satisfied authors, and submit your next article to PeerJ.