“We need to educate to avoid hidden biases” – Solving the challenge of gender balance in science. An interview with Professor Marilyn Renfree 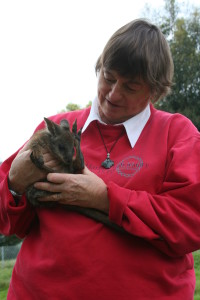 We are delighted to be sponsoring Finding Ada an event celebrating women in science, technology, engineering and maths (STEM). At PeerJ we believe the achievements of women deserve to be recognised, and we also take great importance in building gender diversity within both our Editorial and Advisory Boards.

By way of our own celebration in the months leading up to the 200th anniversary of Ada Lovelace’s birthday we wanted to highlight some of the women who make up our Editorial and Advisory Boards, and their views on the challenges facing women in science today.

This month we talked to Marilyn Renfree, University Laureate Professor and Ian Potter Chair of Zoology at the University of Melbourne. Here’s what she said:

Why do you think we need days like Finding Ada to highlight the great work women are doing?

Women are “half the sky” (Kristof and Wu Dunn, 2010), yet even now, in the 21stst century, relatively few senior positions are held by women – not only in science but in commerce and law. Women often solve problems from a different perspective and maintain a different sort of collegiality. We recruit plenty of women into the biological sciences: it is retaining them in science that is the issue.

At PeerJ we believe in gender equality and we strive towards this – why do you think this is important for science and the publishing of scientific research?

Women are more inclusive than men in the way they conduct their research. Publishing is one way of demonstrating that there is more than one way of solving a problem but importantly also enhancing the reputation and profile of women and to demonstrate equality. PeerJ is an excellent forum through which to achieve this objective.

What more do you think could be done to encourage women into the fields of science, technology, engineering and maths?

Role models are very important. Although there may be 50% female undergraduates, an increasingly small proportion of these women reach the most senior levels in STEM. There are many reasons for this. Family commitments may be one of them, but there is often an underlying male prejudice in appointments committees. I have heard men praised for being ambitious, but women with similar talents and drive are accused of being too aggressive. We need to educate men, and women too, to avoid these often hidden biases. Role models remain critical.

Which women inspired your scientific career and why?

I was very fortunate to have Dr Phyllis Nicholson, one of the earliest women in Australia to receive a Doctor of Science degree, as our replacement high school biology teacher. She was partly responsible for my interest in Australian mammals. After my PhD, I was so fortunate to do my second post-doc with Anne McLaren, FRS, who was inspirational, kind, caring and game to try anything – even catching wallabies, despite her diminutive size. She became a surrogate grandmother to my children, a close colleague and confidant. Anne encouraged women she met from all over the world, and led by example. Her science was important to her, but so too was her family and three children. Every woman in science needs such a role model.

What words of encouragement do you have for any women wishing to pursue a career in science, technology, engineering and maths?

I discovered a quote from Goethe very early on in my career – “Whatever you can do, or dream you can do, begin it. Boldness has genius, power, and magic in it. Begin it now”, a sentiment with which I agree and have had as my mantra ever since. Women can do anything, but they need to grasp opportunities with both hands and never be discouraged by the challenges – or by men: there is always a way to solve problems, be it a scientific one or a domestic one. And above all, to realise how exciting it is to be the first to discover something, even if it is a small something. Child care is still one of the most challenging aspects of a career in science for women. My two daughters were only 3 and 6 when I was appointed as Head of a large Department (and the first woman in that position). To cope with the various demands required a different approach from that of my male predecessors to achieve the same outcomes. We need women in science to balance “Half the Sky”!

Marilyn Renfree is Laureate Professor and Ian Potter Chair of Zoology, School of BioSciences, University of Melbourne. Elected Fellow of the Australian Academy of Science (AAS); Secretary, Biological Sciences and Vice President of AAS; Officer of the Order of Australia; Past President of the Society for Reproductive Biology; Former NHMRC, Fulbright, Ford Foundation and Royal Society and ARC Federation Fellowships, Director of the ARC Centre of Excellence for Kangaroo Genomics. Gold Conservation Medal San Diego.