We recently published “More ties than we thought” in PeerJ Computer Science. In this study, author Mikael Vejdemo-Johansson, and his colleagues utilize math and computer science to examine the many ways to tie a necktie!

In this post, Mikael comments on his research and experience publishing with us. 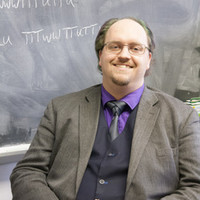 I deeply enjoy the unexpected and the absurd. The main thread I trace through my main research interests is the study of how topological concepts — in particular homology, show up in places you might not expect them. Homology makes a lot of sense if you have a mesh, and seek specific topological information about it.

Similarly, homology works well on continuous geometric objects, and less well when you just look at clouds of sample data — the way you might get out of a 3d scanner — and don’t have a mesh describing the shape. But in computational and applied topology, especially in the branch topological data analysis, we build tools that adapt homology to a statistical setting, that let us throw the toolbox at clouds of points — and then reinterpret any data as such point clouds.

My academic career path is driven both by this interest in the absurd, and by an utter addiction to the intellectual rush that comes with understanding. When everything slots into place, and something new reveals itself — it is a fantastic feeling, and one I can never get enough of.

MJV: There was a paper in Nature in 2000 by Fink and Mao that counted the number of ways you could tie a necktie. They came up with the number 85 for a supposedly complete tally. Since 2010 however, there has been a growing interest in new types of tie knots. These new knots do not fit in the system that Fink and Mao used, but we discovered it is a reasonably small fix to the way they chose to describe their knots. This small fix vastly increases the count of tie knots. By employing state-of-the-art combinatorial techniques (with deep thanks to our peer reviewers, who came up with several suggestions for drastic improvements to our work) we were able to come up with a count for this expanded system: 266,682 tie knots for the most generous definitions we were able to describe.

It still isn’t a *complete* count, and as I’ve gone into this research, I have grown increasingly convinced that however we may build a systematic way to enumerate tie knots, there will be someone somewhere coming up with a cool way to wear a tie that falls outside that system. Instead of being a complete count, it works as a lower bound: there are at least 266,682 ways to tie a necktie; so “very very many” is an adequate description of the situation.

I have described the methods we use to do these counts in an article at The Message, as well as in a YouTube video explaining the notation that makes everything work.

MJV:  Two of them come to mind.

MJV: The sheer size of things. I had expected more knots than the 85 previously known. I knew there was significantly more room in the abstract space of possible knots that you could move around. I could imagine maybe a few thousand knots showing up. I wasn’t really prepared for the hundreds of thousands that emerged from our calculations.

Also, the … well … mundanity of things. I built a webapp that pulls out a knot at random and gives you instructions to tie it and I have been wearing random knots quite a lot since I built that page. Most knots seem to be either not all that interesting, or versions of the Trinity knot: I had hoped for more variation, for there to be new interesting things to pull out of this — but they are like tiny diamonds to be pulled out from pretty large mountains of pretty boring rock.

Figure 1: Some specific tie-knot examples. E and F in the figure are typical examples of some of the not particularly interesting knots that emerge from the random tie knots generator.

I think I’m pretty much done with the tieknots research now. I expect to be talking about it for years to come, but I don’t really see myself going after much more directly related to this research-wise. I *am* however very interested in the connections and techniques that powered these research results — I would like to go on working with formal languages, generating functions, and related subjects. These turn out to be a powerful combination, and I hope to find new areas where they are applicable.

MJV: I would actually not do things much differently than I already do.

I have had a LOT of freedom in picking my own directions — even during my PhD studies, I picked out my direction and ran with it, with my advisor keeping an eye out so I wouldn’t get stuck, but not really teaching me much about the research direction I chose to work in. Right now I am working on grant funding from the European Union, and in the grant proposal I wrote about one of my dream projects at the time — about something I thought I might try to do in the far future — and we got fully funded, with the grant reviewers enthusiastic about my idea.

If anything, if I had unlimited resources and less pressure to play things safe, or to deliver concrete results on a deadline (accountability is different from availability) I would like to involve the art and artists more in what I do. That’s a bit more difficult to put into a grant proposal or a research plan though.

MJV: I don’t remember when I first heard about PeerJ. I think it may have been through someone mentioning you on Twitter.

As for persuading me to submit to you, I have been reading the research field list for PeerJ repeatedly, looking for a good excuse to submit to the journal since I first heard of its existence — but it was only with the launch of PeerJ CS that I really could fit in well.

I find the open access model in use to be one of the very few ethically defensible approaches to academic publishing nowadays. There is a maxim among professional authors to distinguish serious publishers from fraudulent ones: money flows towards the writer. This does not hold true at all in academia — we publish, not because we get paid for our texts, but because there is an expectation on publication to put a seal of approval on our work. This approval then leads to career benefits.

As Open Access has become more and more of a movement that won’t just go away and leave the old publishers alone to milk the free labor of academics for their own profits, almost everyone has gotten on the OA train somehow. The old, big publishers do Open Access by shifting their share of research funding from library fees (that I don’t think have really decreased that much in the process) to picking money directly from researcher grants through publishing fees in the range of US $3000 for a paper.

In contrast, PeerJ has fees (and I hope there is a long-term business model here somewhere, to keep you running the distance on our contributions?), but they do not seem to be built on gouging research grants any more.

So this is an effort I want to support. I think PeerJ is doing the right thing with respect to academic publishing, and I want to try to put some of my money where my mouth is, as it were.

MJV: Coming from mathematics and theoretical CS, it is a different experience to have the academic editor start apologizing to me after a month and a half. I’m used to 6-18 months for the publishing process — and the 2 months I had with PeerJ are blazing fast in my mind.

I’ve also run into a few culture differences. One of the production queries was about the “little boxes in the text” — we have been writing our proofs the way they tend to be written — with an End of Proof mark. This seems to have been a completely novel concept to our production editor, who wondered whether to remove these supposed artifacts.

MJV: It is clear that we hit on several snags and hiccups for how the process is expected to go: difficulty finding reviewers, unexpected typography, different expectations in what makes a paper — but even with these bumps in the road it has been blazing fast, and a very pleasant experience.

And this peer review is by far the most helpful and productive peer review I have ever experienced.

MJV: I will submit again. I got myself the 2 papers/year plan (partially) through Overleaf. As for recommending others, I would say it depends on their circumstances. For senior academics, you have more freedom to pick your venues, while junior academics have to think about the baseline of “will this help me get a job?” or “will this help me get tenure?”. PeerJ (the bio journal) is getting their impact factor this year, and that will help with convincing grant agencies, university administrations, and evaluation committees that a publication in PeerJ should count for something.

MJV: Moral Open Access — you don’t view the author as someone who pays the expected and inflated lifetime earnings of their research publication.

The Napster of Academic Publishing — academic publishing is headed towards the same kind of massive redefinition of the industry that music has been going through; and you are one of the seriously disrupting players in the field.

Join Mikael and thousands of other satisfied authors, and submit your next article to PeerJ.

Tags: Algorithms and Analysis of AlgorithmsauthorinterviewComputational LinguisticscsTheory and Formal Methods