Today we published our one thousandth peer-reviewed article in PeerJ – “Can endocranial volume be estimated accurately from external skull measurements in great-tailed grackles (Quiscalus mexicanus)?”. In this study, author Corina Logan, and her co-author utilized museum specimens to investigate if it was possible to estimate brain size by measuring the external area of great-tailed gackle skulls.

Given the milestone of being the 1,000th article, we asked Corina to comment on her research and experience publishing with us.

CL: I did this research as a SAGE Center for the Study of the Mind Junior Research Fellow at the University of California Santa Barbara (UCSB) with support from the National Geographic Society/Waitt Grants Program. My co-author, Christin Palmstrom, is a UCSB undergraduate and this paper is the result of data she collected during one of her independent research projects with me (see below for a few words from Christin on her experience with this process). 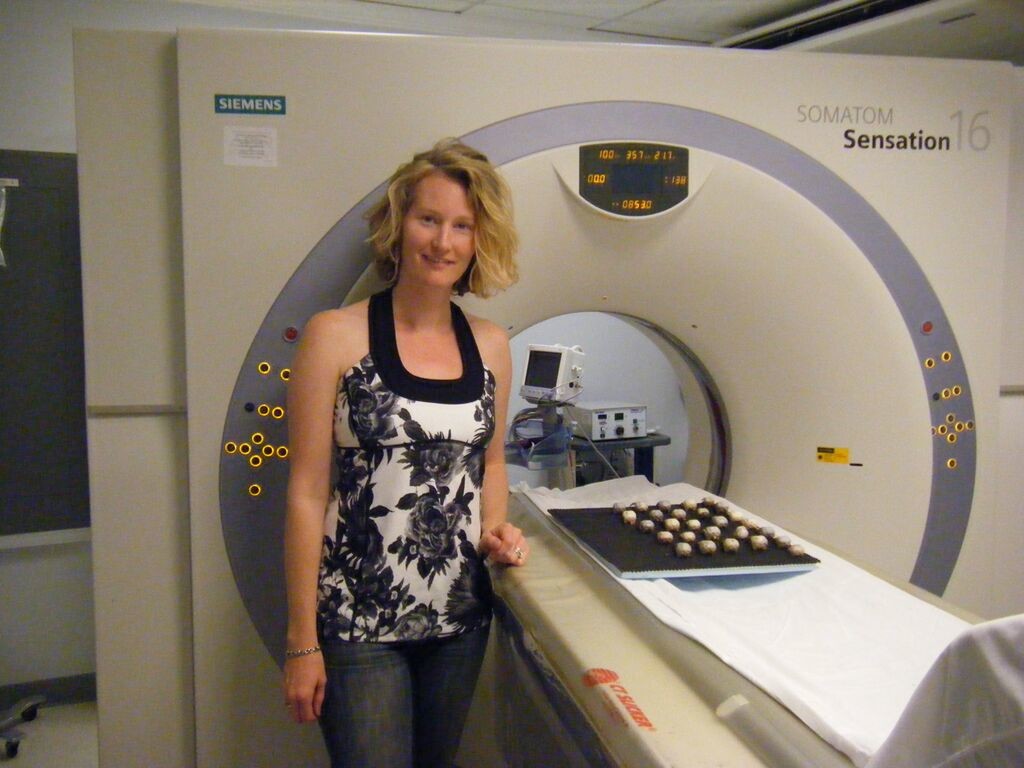 CL:  We wanted to see if there was a way to estimate brain size (approximated by endocranial volume) by measuring the external area of great-tailed grackle skulls with calipers. Great-tailed grackles are a bird species that are invasive because they capitalize on associating with humans: they eat our garbage, crops, and at our outdoor cafes. If the project worked, it would make my long-term study on cognition in wild grackles much richer because I could estimate the brain sizes of all of the individuals in my study. Doing so would start to reveal what social, environmental, genetic, and cognitive factors relate to variation in brain sizes. However, we weren’t able to find such a proxy, which showed that 1) validations should occur in each species before relying on brain size proxies, and 2) we need to use different statistics when determining the accuracy of approximating one data set from another based on individual differences.

CL: This was our first time conducting a study using museum specimens. We thought that Christin was going to have to travel to the museums that had grackle skulls to measure them, but Christin did some research and learned that museums loan specimens to each other just like libraries! Mireia Beas-Moix was our “librarian” at UCSB’s museum: the Cheadle Center for Biodiversity and Ecological Restoration (CCBER). Mireia loved that we were using CCBER’s resources and encouraged us to loan specimens from more museums. Mireia handled the logistics so all we had to do was formally request the skulls from the loaning museums and then go to CCBER on campus and measure them when they arrived. It was great!

CL: I honestly thought we would be able to approximate endocranial volume from external skull measurements. It was such a surprise that this wasn’t possible at all.

CL: A second surprise came from going through the statistics literature to figure out how to measure accuracy and determine how accurate is accurate enough. Through this process, I was surprised to learn that Pearson’s correlations are the wrong kind of statistics to use to determine the accuracy of individual data points. Most researchers in animal behavior use correlations and rely on any r value if it is significant, seemingly regardless of how much of the variance is accounted for by the relationship between the two variables (i.e., how high the r value is). The prediction analysis we used in this paper (or similar analyses) should replace Pearson’s correlations if someone wants to examine data at the level of individual data points. 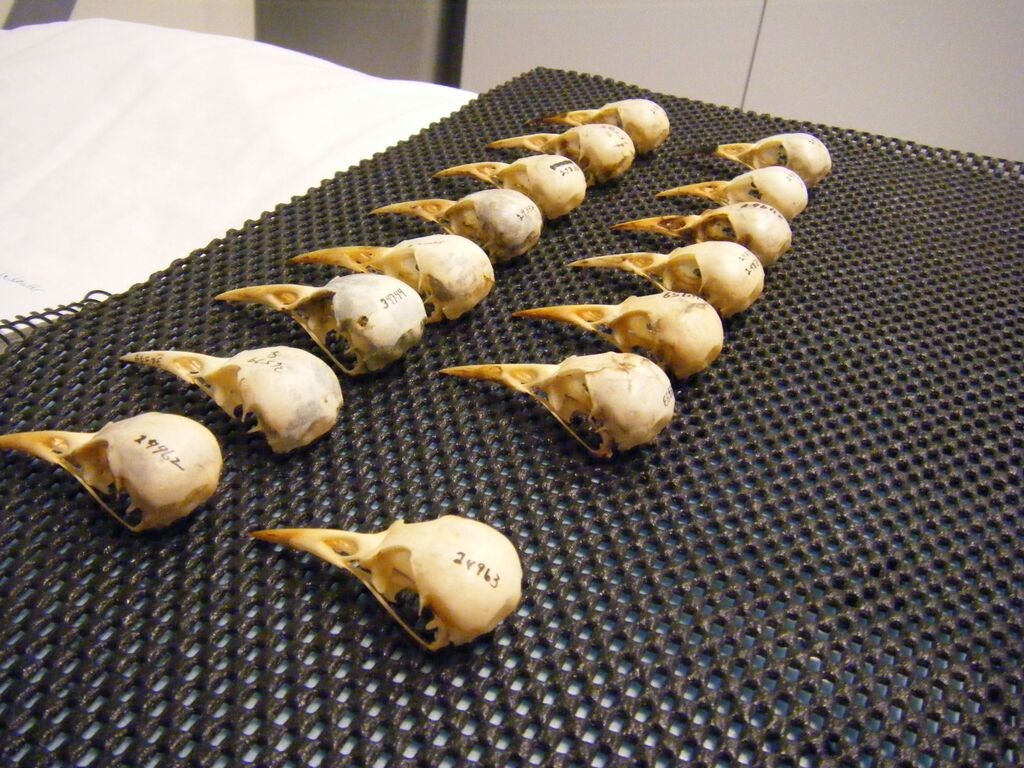 “We scanned two sets of great-tailed grackle skulls and learned from the first scan that it is better to arrange the skulls in fewer rows to reduce the depth of the scan, which reduces the overall file size.” – CL

CL: I want to know why great-tailed grackle skulls are so variable – this is why we weren’t able to validate an endocranial volume proxy for them. I would find data that include individuals from the same populations over long time periods, and collect other body measurements if the rest of the skeleton is available, as well as collaborate with wildlife managers who cull grackles in some US states so I could gather data from the bodies. With time, I think a clearer picture would emerge showing how much variation is due to population differences and how much is explained by other body measurements, which might make a brain size proxy possible from external skull measurements.

CL: I am collaborating with a few people to investigate great-tailed grackle neuroanatomy to determine whether, at the species level, there are particular brain regions that are enlarged or have a higher density of neurons than other brain regions, and how this species compares with other bird species for which we have the same data. I hope to understand more about what makes them so good at solving their foraging problems: are the brain regions that are enlarged in birds that are good at problem solving also enlarged in grackles, thus indicating that they may rely on complex cognition when solving such problems?

CL: Alecia Carter published a paper in PeerJ on personality and social learning in baboons last year and she raved about the experience, which is how I first heard about PeerJ. Alecia is an advocate of fair and open access publishing models so I trusted her opinion and decided I wanted to try it for myself. At first, I made a PeerJ profile and started answering and asking questions of papers at the website. I was drawn in by the process because at the PeerJ website, science is alive – a paper isn’t just published and done, people can continue to ask questions of it and the authors respond and the piece moves forward as science should.

CL: I was reading a PeerJ blog post a couple of weeks before our paper was accepted. The blog mentioned that PeerJ had published over 950 papers so far. I thought “wouldn’t it be amazing if our paper was the 1000th?” I was so surprised when I learned that it was! It is great to be part of such a milestone for PeerJ because what they are accomplishing aligns so well with my publishing ethics.

CL: For people who think that the peer review process is more relaxed at open access journals because these journals just want money from the authors so they will publish anything: you’re wrong! The revisions for this paper were some of the most difficult I’ve had to make. I was expecting to have only a few reviewer comments because that is what happened with a similar paper I published on red deer in a non-open access journal, but I was very wrong. In the end, one of the reviewers was so helpful that they really improved the paper and the effort to address their comments was worth it.

CL: I would absolutely submit papers here again and I very much look forward to doing so! I definitely recommend that colleagues have the PeerJ experience to see for themselves what the future of publishing is like today.

CL: I was excited to have Christin’s first experience of publishing a paper be at PeerJ. We chose to be as open as possible to get the full PeerJ experience: we published the paper first as a preprint and we chose to publish our reviews. Introducing the next generation of scientists to this new world of publishing from the start of their careers creates a completely different mindset about publishing and I am sure they will think of even more ways to improve the process of bringing scientific results to the masses.

PJ: Christin, what was it like to conduct an undergraduate research project that resulted in your first publication?

CP: It has been a really amazing experience for me to be a part of this project from the beginning through publication. Not only have I learned a lot about data collection and analysis, but also about obtaining funding and the publication process. When Corina first proposed this study to validate endocranial volume, I was excited to lead the data collection part of the project. I applied for and was awarded an Undergraduate Research and Creative Activities grant from UCSB and began searching for collections of great-tailed grackle skulls. After finding enough skulls and collecting the subsequent data on those skulls, I realized that there was still a lot to be done before we could publish our findings. After analyzing the data and writing up the results, we went through two major revisions after receiving feedback from the reviewers. I was surprised at how many comments we received, but I enjoyed seeing how much they improved our paper. I am now looking forward to the next step and seeing what kind of impact our paper will have on the scientific community once it is officially published at PeerJ!

Join Corina and thousands of other satisfied authors, and submit your next article to PeerJ.