We recently published “Laser photogrammetry improves size and demographic estimates for whale sharks”. In this study, author Christoph A. Rohner and his colleagues examine the results of a study on Whale Sharks. Christoph comments on his research and experience publishing with us. 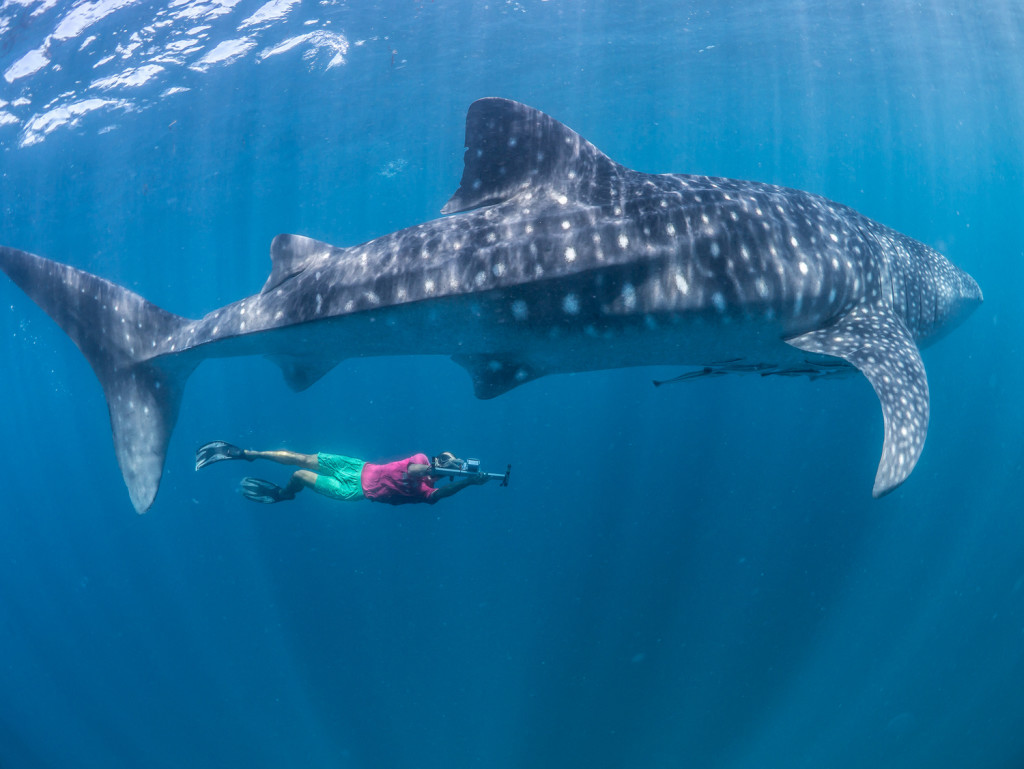 PJ: Can you tell us a bit about your team?

CR: We’re quite international! Simon Pierce, Clare Prebble, Andrea Marshall and myself work with the Marine Megafauna Foundation, and were based in Mozambique during the majority of data collection for this study. Simon, Clare and I did the bulk of the fieldwork together in Mozambique and Tanzania. Anthony Richardson, Mike Bennett and Scarla Weeks are from the University of Queensland in Australia, and together with Simon they formed my PhD supervisory team. Geremy Cliff and Sabine Wintner from the KwaZulu-Natal Sharks Board provided additional data from stranded whale sharks along the South African coast.

CR: We measured live, free-swimming whale sharks with laser photogrammetry – basically projecting laser pointers onto the flank of the shark while taking a photo to provide a scale bar. This technique provides more accurate size estimates than visual estimates. We found that male whale sharks reach maturity at over 9 m in length, around 2 m longer than those found in the Atlantic, suggesting biological differences among these populations. We also found that grow rates over a 1–3 year time-scale could not be measured with the technique. We likely need an improved technique of measuring whale sharks, or a longer time interval between re-measurements, to accurately determine the presumably slow growth rate of the species. 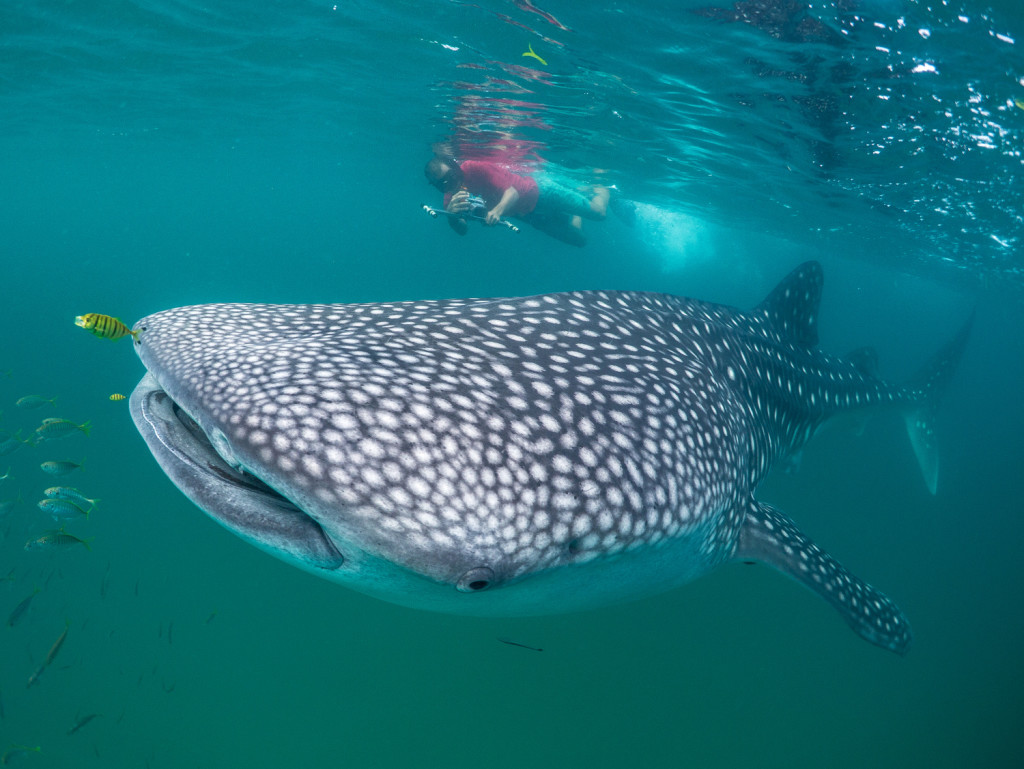 CR: The three sharks that stranded on a beach in southern Mozambique were actually my very first whale shark encounters. I had just arrived in Mozambique ready for my (in-water) fieldwork, when we heard about the stranding. We drove by 4WD over bumpy, sandy tracks to get the remote beach and made on-site dissections continuing late into the night to beat the approaching high tide. It was an interesting start to this study, and thankfully I got the chance to swim with many live whale sharks since then.

CR: The whale shark is the largest fish in the ocean and, compared to many other sharks, it is relatively well studied. That being said, we still have some big gaps in our knowledge of their biology. The infographic below nicely illustrates that almost all of the sharks seen in their known feeding areas are juveniles, with a strong male bias. Where are the newborn whale sharks? Where are the females? Where are the large, mature adults? It is an exciting time to be a whale shark researcher, as we are getting closer to answering some of these big questions. 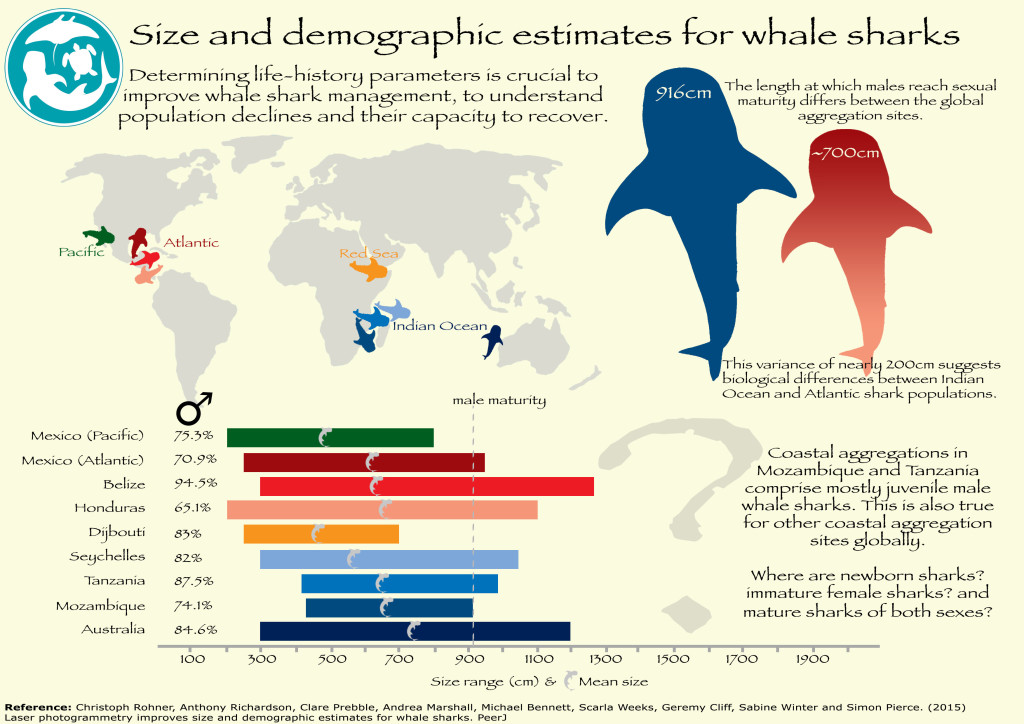 PJ: Can you briefly explain the demographic infographic on whale sharks?

CR: The main point of the infographic is to compare the size and sex structure of whale sharks at their aggregations around the world. The big question mark at the higher end of the size spectrum is to point out that we don’t see many big, mature sharks at these aggregations. There is also empty space at the lower end of the spectrum – whale sharks are born at ~50–60 cm in length, yet we only see them when they are >200 cm long.

CR: Some of our colleagues published with PeerJ and recommended the journal due to the quick turn around and open access policy, so we gave it a go.

CR: The publication process we had with PeerJ was smooth and fast. Our initial Editor went to Antarctica, but PeerJ quickly found a replacement to keep the process going in his absence. 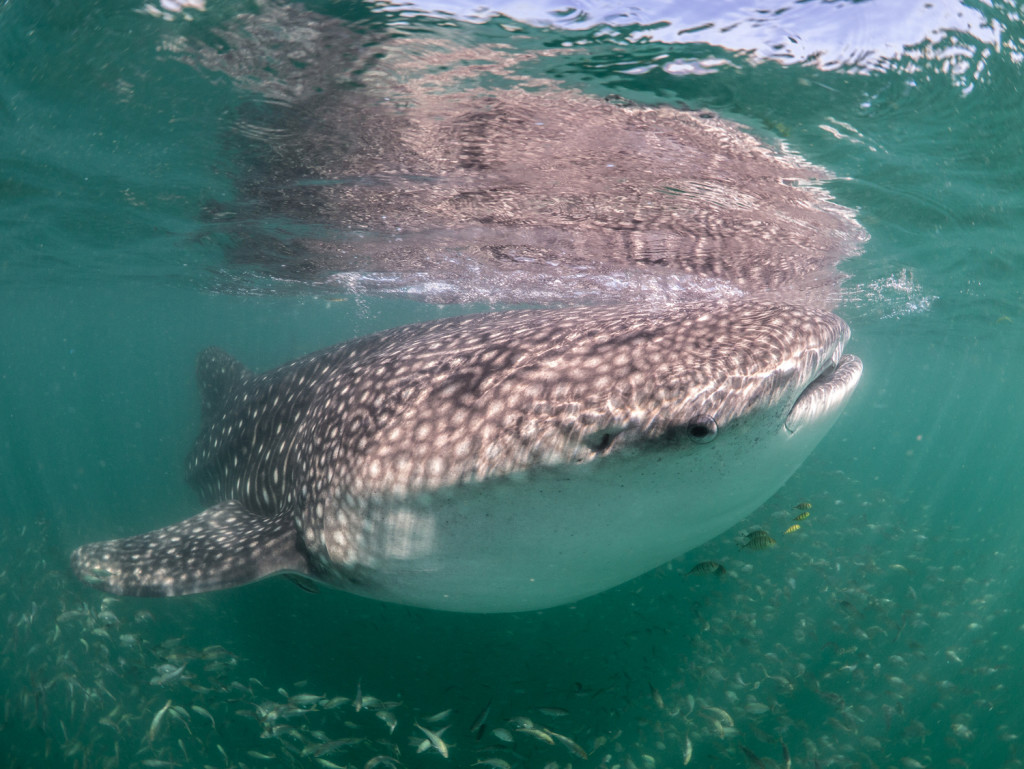 CR: Yes to both questions. Having an Open Access option is one of the major considerations for us when selecting and outlet for our work, as we want to quickly share our findings with colleagues and managers. Working for a small non-profit organisation means we have to be cautious with our finances, and PeerJ combines these two considerations nicely.

Join Christoph A. Rohner and thousands of other satisfied authors, and submit your next article to PeerJ.