Today we are pleased to have published “Pre- and postmortem tyrannosaurid bite marks on the remains of Daspletosaurus (Tyrannosaurinae: Theropoda) from Dinosaur Provincial Park, Alberta, Canada“. In this crowdsource-funded study, first author David Hone, and second Author Darren Tanke, examined bite marks that they found on a Daspletosaurus skull.

David and Darren comment on their research and experience publishing with us.

PJ: [David] Can you tell us a bit about yourself?

DH: I’m a British palaeontologist based in London, though I’ve worked all over world (2 years in Munich, 3 in Beijing among others). I work especially on dinosaur ecology and behaviour, and on pterosaurs.

PJ: [Darren] Can you tell us a bit about yourself and your team?

DT: I am the Senior Technician II in the Preparation Lab at the Royal Tyrrell Museum of Palaeontology. I started with the Paleontology Department at the now named Royal Alberta Museum in Edmonton, Alberta in 1979 and was transferred down to Drumheller in 1983 to join the team building paleontology exhibits for the Tyrrell Museum of Palaeontology, then under construction. My job duties involve going into the field across much of Alberta (and I’ve done work elsewhere in western Canada, Montana, Utah, Texas and overseas in Mongolia, France, Argentina, and Australia) looking for, finding, collecting and safely transporting mostly vertebrate fossils back to the museum. There I prepare the rock away from the fossils making them available for research and/or display purposes. In the course of my fieldwork, in 1981, I first became aware of dinosaur bones showing the effects of injuries and disease, a field of study called paleopathology. Dr. Hone and I met through the internet as we had some mutual dinosaur research interests. His diverse knowledge of theropod dinosaurs and their feeding behaviors created an ideal opportunity to collaborate and write this project up. 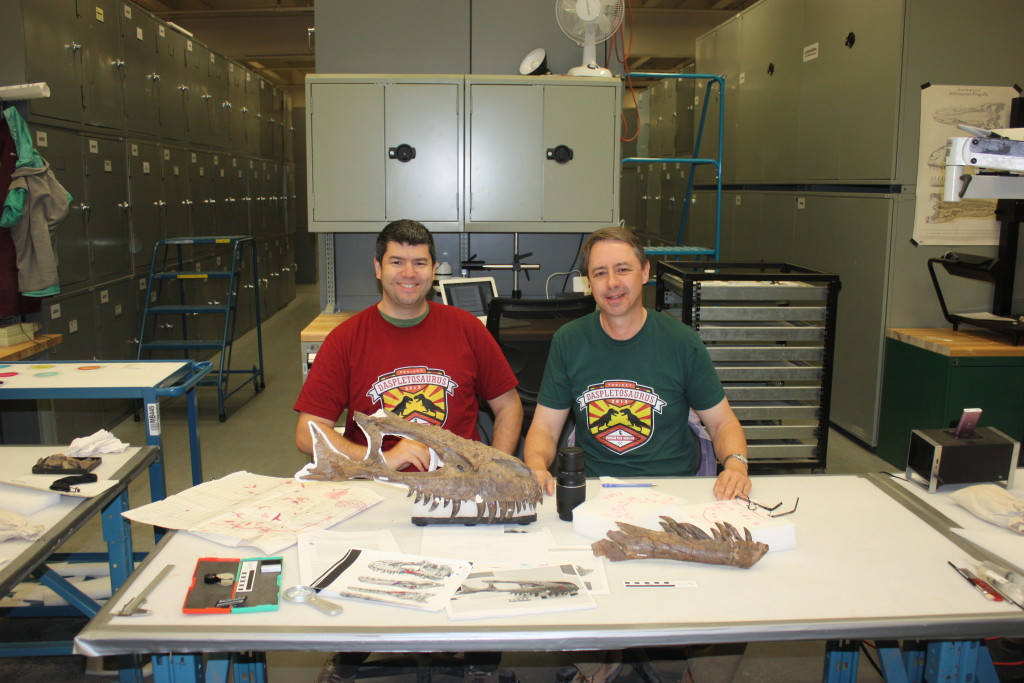 Coauthors David Hone (left, red) and Darren Tanke (right, green) in the Royal Tyrrell Museum with the skull of the tyrannosaur.

DH: Essentially this documents the damage done to the skull and jaws of a large tyrannosaur that shows it suffered injuries during life and was also bitten (and presumably fed upon) after death. In both cases at least some of the damage was inflicted by another tyrannosaur.

DT: As a preparator for Philip J. Currie from 1979-2005, I was often given Late Cretaceous tyrannosaur specimens to prepare for his research and began to observe a demonstrable pattern of types and relative frequencies of injuries afflicting these animals. Many injuries in tyrannosaurs and other dinosaurs are simple bone fractures which exhibit healing to various degrees. But in Albertan tyrannosaurs such as Albertosaurus, Daspletosaurus, and Gorgosaurus, healing gouges to the face are regularly seen, upwards of 50% of skulls show these injuries. These are clearly bites inflicted by other tyrannosaurids as there was nothing else around big enough to create these bite wounds. As the wounds have active reactive bone showing healing processes we know they were incurred in life and that the victim lived for some unknown, but extended period of time afterwards. In the mid 1990’s I was given the job to prepare the skull and some other skeletal parts of the Daspletosaurus specimen featured in our paper. I was half expecting to see injuries and was not disappointed. But there was more. Unhealed bite marks were present on the dentary and some skull pieces were broken up but could be reassembled. These bones and their breakages coincided with the unhealed toothmarks, the spacing of which matched that of another tyrannosaur. This information, plus compelling taphonomic data showed that the Daspletosaurus was in an advanced state of decay. It is often suggested tyrannosaurs were scavengers and ate rotten carrion but there was no actual evidence. This specimen shows tyrannosaurs could and did utilize rotting carcasses as a food source and in this case possibly demonstrates cannibalism.

PJ: What unexpected hurdles or challenges did you face when undergoing this research study?

DH: Interpreting the material correctly (and carefully) in these cases is really reliant on having good information on how the bones were positioned when found and knowing the conditions in which the animal was originally buried. First of all, the Tyrrell (the museum where this is held) documents this kind of information brilliantly, but also Darren helped excavate and prepare the material so is intimately familiar with it.

DH: That this kind of information really is there in the fossils, if you are careful about it. The public seems happy with the idea that we can extract information from fossils about things like size or physical traits like speed, but still seem to regard any statements about the behaviour of extinct species as purely speculative and while there are some wild statements out there, we can piece together quite a bit from some specimens.

PJ: [David]- you actually named our mascot, Charlie the Monkey in an early PeerJ competition. What most interests you about PeerJ and Open Access publishing?

DH: I do a lot of outreach work to try and make information and ideas accessible to the public, and obviously having that backed by research that interested people can easily access makes all the difference for the original papers to be freely available.

PJ: One of the interesting aspects of your story is that you received ‘crowdfunded’ support from a variety of individuals on the experiment.com web site. How did that work for you?

DH: Crowdfunding is certainly something that seems to be taking off in various forms for all kinds of projects where people are sourcing funds from the public to complete projects. It is also becoming established in the sciences with projects becoming funded this way. In this case I was lucky enough to get the required funds to travel to Canada and carry out the research, and reported back to my sponsors with various reports and updates through the process of the research and write up. I felt it was critical to the funding process that the eventual paper be published though an OA journal. If the public is paying for the research they should be able to see it, and while it would always have been possible to share printed copies or PDFs with backers, obviously making it as widely available and literally open makes sense for a project that is intimately tied to engagement with the public.

DT: I expected to see face-biting injuries but was surprised by their number and extent. Clearly this animal had a rough life and as evidenced by its immaturity, a short one.

The specimen was a delight to prepare. A real cool aspect of the preparation work was working with the skull pieces broken apart by the biting of a scavenging tyrannosaur, carefully clean all the silt out of every nook and cranny and then be able to fit them back together perfectly some 76 million years later.

DT: I would hope that the public will learn that studying disease and injuries, particularly premortem trauma, in dinosaur specimens like the Daspletosaurus, can provide valuable and intriguing insights into dinosaur lifestyles and behavior. Tyrannosaurs were pugnacious animals and regularly bit each on the head creating wounds. But what we see today only the wounds to the bones. What of the skin and underlying soft tissues? Those must have been severely lacerated too. The fact they engaged in these behaviors tells us they could certainly land killing bites on their prey. There is much debate about tyrannosaurs being active predators only or only scavengers. The truth is somewhere in between. The Daspletosaurus confirms an instance of scavenging, but the repeated occurrences of face-biting injuries shows they seriously bit living animals too.

DH: A second paper has already been submitted from this project. While in Canada working on the tyrannosaur I was invited to look at a pterosaur the museum held that had not been worked on before and spotted some neat things, so that is now being produced as a second paper.

Join David, Darren, and thousands of other satisfied authors, and submit your next article to PeerJ.