Yesterday we published the work of Kamen Simeonov and Daniel Himmelstein in which they show a relationship between increased elevation and reduced lung cancer rates by examining publicly available data sets. After accounting for multiple factors, the findings suggested that inhaled oxygen may actually be carcinogenic.

We were very interested in hearing more about this work so we invited them to comment on their research and their experience publishing with us. 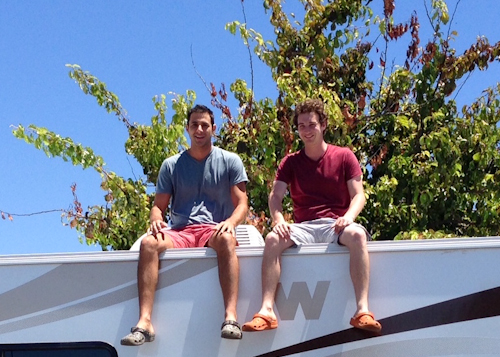 PJ: Can you tell us a bit about yourself?
KS (on the left): I’m an MD-PhD student in the Medical Scientist Training Program at the University of Pennsylvania with an interest in cancer and an unconditional love for research. Prior, I lived and worked in San Francisco and attended undergrad at Stanford. Born in Bulgaria and raised in West Virginia, the move to Philly ended a long westerly march.

DH (on the right): I’m a data biologist in the era of computation, making for an enjoyable PhD experience in UCSF’s Biological & Medical Informatics program. After spending my first 22 years in the Northeastern United States, primarily New Hampshire, I moved to San Francisco where I became roommates with Kamen.

PJ: Can you briefly explain the research you published in PeerJ?
KS: Inspired oxygen leads to formation of reactive oxygen species (ROS), which are mutagenic and ultimately carcinogenic. We asked whether this phenomenon was present and observable in humans living at different oxygen pressures due to geographic elevation: Across counties of the Western United States, we found that lung cancer incidence decreased dramatically with rising elevation. Adjusting for demographics and known risk factors, including smoking, further sharpened the inverse association. Environmental correlates of elevation, such as particulate pollution and sun exposure, did not explain the trend. Notably, the association was not present for other common cancers, such as breast and colorectal, those arise from tissues without direct atmospheric exposure. As a whole, these findings pointed toward an atmospherically-tied (i.e. inhaled) carcinogen inherently and inversely linked to elevation, suggesting that oxygen is a player in human carcinogenesis.

PJ: Do you have any anecdotes about this research?
DH: After Kamen moved to Philadelphia for medical school, my mom assumed I had a new long distance girlfriend, due to the lengthy phone calls at odd hours that consumed our entire monthly allotment of cell phone minutes.

KS: Progress dipped following that incident as our discussions became limited to nights and weekends.

PJ: What surprised you the most with these results?
DH: The magnitude (βz = -0.35) and significance (p < 10-16) of the lung cancer association. Many ecological studies report on associations with a small effect size and moderate significance. Although confounding cannot be definitively ruled out under our study design, the risk of an entirely spurious association decreases with effect size.

PJ: What kinds of lessons do you hope the public takes away from the research?
DH: With the rapid spread of public datasets over the last decade, data scientists have an enormous new playground. And since the best tools are open source and the data is free online, anyone can play.

PJ: Where do you hope to go from here?
KS: While I greatly enjoyed this foray into epidemiology, I’m an experimental biologist at heart. As I continue my training, I would like to explore our findings mechanistically in a controlled wet lab setting.

PJ: If you had unlimited resources, what study would you run?
KS: While a similar analysis employing cohort data could further minimize potential confounders, only an experimental approach can truly resolve oxygen’s proposed role as the driver of the association. Furthermore, in vitro and especially organismal models of carcinogenesis are crucial to interrogating the molecular and cellular pathways involved.

PJ: Why did you choose to reproduce the complete peer-review history of your article?
DH: Science is a collaborative activity. It thrives alongside interaction and feedback. Open review provides an initial discussion, available upon publication, to seed further interaction. Journals are too often graveyards for research: static documents play the immortalizing role of a tombstone, while the process of discovery and the resulting scientific content are rarely revisited, as if secluded deep underground in a casket. Open review is one small step towards a more transparent, accessible, and interactive future.

PJ: How did you first hear about PeerJ, and what persuaded you to submit to us?
DH: When PeerJ was first announced, I was intrigued by its affordability. Later when deciding on journals, several additional features appealed to us: CC-BY licensing, open review, review transfer, rich article annotation and discussion, and an elegant user experience and submission interface. Finally, days before we submitted, I met several members of the PeerJ team at a Bay Area open access event and was impressed with their expertise and devotion to transparent science.

PJ: Do you have any anecdotes about your overall experience with us? Anything surprising?
KS: Prior to publication, we posted a preprint of our manuscript to PeerJ PrePrints – a practice I was unfamiliar with and had even been warned against in the past. However, I am now a big proponent of the preprint and will carry on the tradition with my future work. Beyond the immediacy and ease of communication our preprint provided, PeerJ‘s system was efficient and allowed for quick updates with new information.

PJ: How would you describe your experience of our submission/review process?
KS: Refreshingly civilized and contemporary.

PJ: Did you get any comments from your colleagues about your publication with PeerJ?
DH: Awareness of PeerJ has been growing quickly. After discussing PeerJ with several colleagues at UCSF, one colleague submitted his manuscript detailing the first open source implementation of a state-of-the-art machine learning method. He was pleased with the quick response by reviewers, which took under two weeks.

PJ: Would you submit again, and would you recommend that your colleagues submit?
KS: I think anyone who is interested in publishing rapidly, yet with thoughtful, respectful, open peer review should consider PeerJ. Daniel and I both certainly fall into that category. I believe many others do as well.

PJ: Anything else you would like to talk about?
KS: Publishing is a necessity but in the current system can often become a distraction. We need more publishers that minimize the distractions while streamlining scholarly communication, so we can all get back to what we love: Discovery!

PJ: In conclusion, how would you describe PeerJ in three words?
Both: Joy of Publication

Join Kamen Simeonov, Daniel Himmelstein and thousands of other satisfied authors, and submit your next article to PeerJ.