The future is open to all – a perspective on OpenCon 2014

As part of our involvement in this year’s OpenCon we supported an early career researcher with their travel fees to the event. Jon Tennant was nominated by OpenCon to receive our travel grant, and as a big advocate of OA and already published in PeerJ we were delighted to support his attendance at OpenCon. We asked Jon to give us his thoughts on the event and who inspired him there. Here’s what he said:

One is rather inspired. OpenCon 2014 was a wonderful time bringing together 175 of the best minds in early career research and the ‘world of open’ to discuss how we make access to knowledge, data, and educational resources better for everyone. Over the weekend, we heard from some of the leading people making the strongest cases for openness. This was topped off with a day in Capitol Hill, hearing from and engaging with people who work in the policy domain. It wasn’t so much an event, as a milestone. 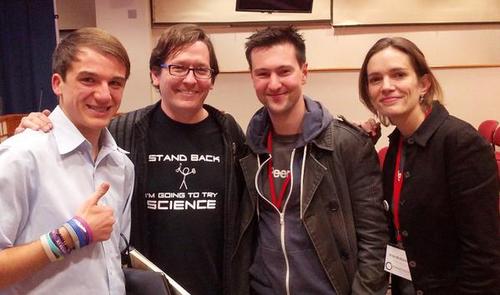 There are some people I wish to directly acknowledge from OpenCon as true leaders in the open community. Their talks, or discussions with them, were the most influential on me personally.

These were the people and the talks that stood out for me, although each and every person who came up to that stage was incredible. Hearing from Patrick Brown about how he originally set up PLOS was rather inspirational. He, among others, emphasised the role of and need for a community vibe for ‘openness’. I loved his thoughts on academics ‘taking the power back’ from publishers, by being part of an entrepreneurial, subversive, and open community. Other inspirational talks include one by Heather Joseph of SPARC, on that our goal should be to set the default for academia to ‘open’, a goal echoed by every single person in that room.

The trend for openness on a global scale is increasing. Several examples include the RCUK policy on open access, a memorandum in the US stating that data from federally funded research must be made publicly available, the establishment of Open Access Nigeria, and the SciELO initiative, to name a few among thousands of progressive changes. Heather stated that in spite of this progress, it’s still important that we make changes to the current system, and keep the global trend going for the benefit of everyone. One of my favourite quotes from OpenCon has to be from Ahmed Ogunlaja “Open access wins all of the arguments all of the time.”

However, one primary issue that still requires addressing within the open discussion regards careers, and the potential that dedication to OA publishing can lead to self-sabotage. Ironically, this claim often comes from those making decisions about others’ careers, and is based around the very real fact that we currently don’t have formal assessment criteria for academics that stretch far beyond the impact factor and perceived prestige of the journal in which an article was published. Clearly, this model is deeply flawed, and fortunately some policies such as that used by the REF in the UK explicitly forbids the use of the impact factor in assessments, instead relying on ‘impact case studies’. You can sign Initiatives like DORA, pledging to find alternative and better modes of assessing academics.

The reason why I’m discussing this is that it is a real part of the open discussion which needs to be developed. Whether it is based on evidence or not, this is still one of the primary causes of resistance to open access, in my experience. Victoria Stodden addressed this point in her talk, stating that it should not be expected of early career researchers to ‘martyr’ themselves for the sake of open scholarship, but instead it should be senior academics leading the way forward. What we need to strive towards is a career structure that rewards people for being open and sharing their research. This isn’t easy – it’s going to require a community development strategy combined with a top-down policy framework within which to manage it. At OpenCon, we saw many of the people who are going to make the change. We also saw so many success stories of open access ‘advocates’ remaining highly successful within academia or redeploying their skills elsewhere to try and invoke change. The change is going to happen – we need to make sure that it is community-driven, and remove the element of risk – whether you believe it exists or not – from the ‘anti-open’ frame of mind. One great example of this at OpenCon was the discussion of establishing an ‘O-index’ as a metric of how open a researcher is, and something I cannot wait to see be developed.

So I have a few recommendations or points for not just the ‘open access community’, but for everyone in academia, largely synthesised from numerous discussions and presentations at OpenCon:

Most importantly, have fun being part of the open community. All I saw at OpenCon were happy, energetic, smiling faces. It was great to be part of that, and makes me confident that what we’re all doing is right.

Final thanks to the organising committee, everyone involved to support the logistics of the conference, SPARC, the R2RC, PeerJ for their generous scholarship so I could attend, and every wonderful mind present. You all represent the future, and it is now. 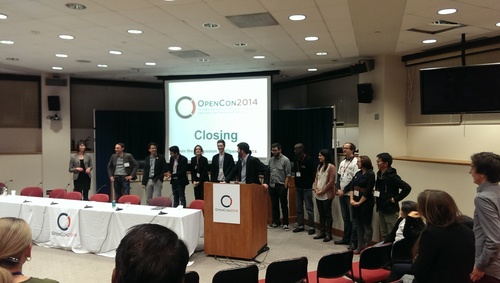 Generation Open: A diary of OpenCon 2014, by Ross Mounce

Blog post by Karin Purshouse, who left her scarf on Capitol Hill.