Note: Through the end of November, PeerJ is offering free publishing, – if you like what you read in this blog post, then try us out now for free!.

Today we published a new study describing the three-dimensional reconstruction and the phylogeny of extinct arachnid orders. We invited the first author, Russell Garwood, to comment on his research and his experience publishing with us.

RG: Sure, I’m a research fellow funded by the Royal Commission for the Exhibition 1851 – an organization that supports early-career scientists undertaking independent research projects in science and engineering (and who have, coincidentally, just opened applications for their 2015 funding round). Much of my research uses high resolution CT scanning to study early land animals – in particular insects and arachnids (spiders and their kin), which moved on to land in excess of 40 million years before our vertebrate ancestors made the same move. Both are large groups, and I find looking at their origins and early evolution a really exciting thing to do. My coauthor on this study, Jason Dunlop, is the curator of arachnids (spider and kin) and myriapods (millipedes, centipedes and a couple of smaller groups) at the Museum für Naturkunde. A focus of his research is the fossil record and evolution of the arachnids.

RG: Jason and I have spent the last few years applying X-ray microtomography (micro-CT) to a range of early fossil arachnids. Those from the Carboniferous period (usually dating from between ~315 million years ago and 305 or so) are often preserved in three dimensions, and by using this non-destructive technique, we can extract their anatomy in its entirety from the rock in which they sit. To date we have reconstructed members of all but two of the extinct arachnid orders that were around during this period. This PeerJ paper ticks off those two remaining orders, by presenting micro-CT based three-dimensional reconstructions of both. Beyond that we also take the opportunity to incorporate all of the fossils we have reconstructed to date in a cladistic analysis of the arachnids – a computational attempt to work out the relationships between all sixteen arachnid orders, plus some of the group’s closest living and extinct relatives. 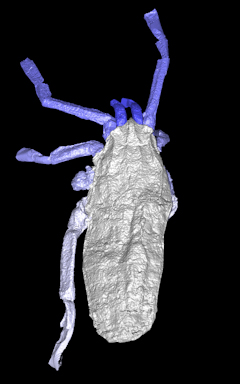 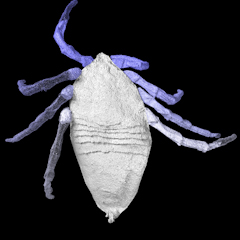 RG: Much of the work was conducted on two visits to Berlin – one in which Jason very kindly put me up on his sofa, and another visit funded by the EU Synthesys program. Both visits provided a wonderful opportunity both to work in the MfN, and to visit the city’s fantastic museums – as well as drawing my woeful ineptitude at speaking German into sharp relief (despite learning the language for ten years). The visits were highlights of the year or so the paper spent in gestation. Overall this has been an enjoyably relaxed undertaking, in part driven by a desire on my part to get my hands dirty with some cladistics and expand my knowledge in this area. The paper ended up being far greater in scope than I think either of us had originally anticipated.

RG: I hope that this research demonstrates not only that arachnids are an important group – they are very diverse, and land-based predators integral to many ecosystems – but also that they have a surprisingly rich fossil record. Furthermore, I hope it shows that studying their fossils can be a worthwhile thing to do. It helps us understand the evolutionary relationships and possible origins of the group. Nevertheless, at the moment, a lot of uncertainty remains. I think this last point is a very valuable take home message for the public: science is as often about incremental advances within a framework of uncertainty, as it is about providing answers.

RG: I think that one of the key challenges in science is looking at interesting questions within the limitations of the resources available. There are many interesting things to look at in both the world of terrestrial fossil arthropods, and high resolution CT in earth sciences – so I like to think that even with unlimited resources I would tackle similar topics (but probably go about them in different ways).

RG: The reviewers and editor all made important points, that improved our paper, and I think their contribution should be recognized and accessible. Furthermore, there are several methodological comments in the reviews which reflect bigger issues. There are no peer-reviewed contributions that discuss these issues. Hence publishing the reviews allowed us to reference reviewer comments from the paper, without entering into methodological discussions ourselves: these are not the focus of our paper, and we don’t want them to be.

RG: I came across PeerJ shortly after it launched, through word of mouth (and just published another paper in the journal in late October). We decided to submit this paper to PeerJ due to the manuscript’s length, and so we could feature more images of both our fossils and trees. Of course, the fact that it will be open access is also important to us, and I like the journal’s publishing model.

RG: The review PDF was 72 pages, and reviews came back in under two weeks. I found the turnaround both impressive and surprising. Indeed, the biggest hold up in the paper was us completing the corrections!

RG: Submission was easy – the biggest issue we had was the file size submission limit. The reviews were very fast, as highlighted above, so the entire process has proven very positive.

RG:  I would certainly submit to PeerJ again – for this kind of paper it has been ideal due to the fast turn around, open access and unlimited figures/length. I suspect in particular, the PeerJ publishing model will be attractive to colleagues in fields and parts of the world where funding for OA fees is limited, as the journal’s approach is particularly attractive in its pricing.

Join Russell Garwood and thousands of other satisfied authors, and submit your next article to PeerJ. Don’t forget that in association with OA Week PeerJ is offering free publishing through the end of November.