Today’s ‘Interview with an Author’ is with Seabird McKeon, first author on ‘Species and size diversity in protective services offered by coral guard-crabs’, an article that we published last month and featured on our homepage. This work received quite a bit of attention in the press.

SMK: My name is Seabird McKeon, I’m a marine ecologist and natural historian for the Smithsonian Marine Station at Ft. Pierce—a part of the National Museum of Natural History.

SMK: The primary theme of my research is the causes and consequences of biodiversity. My work with Jenna Moore was on the differences and similarities between species and size classes of coral guard-crabs. This is a group of small crabs that live inside of coral colonies, and chase off coral eating predators like sea stars and snails. We wanted to know how effective different crabs were in defending their coral host. 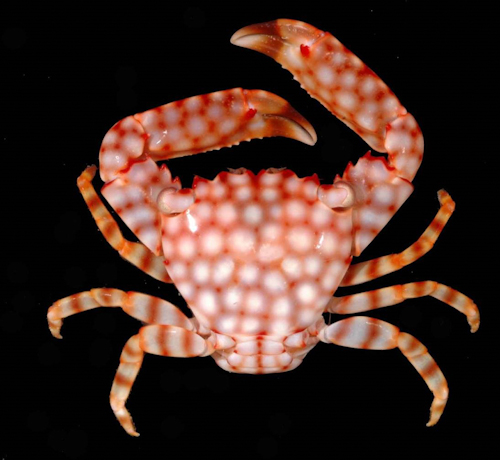 SMK: The island of Mo’orea is a beautiful place to work and we were frequently surprised by a Humpback Whale or Maori Wrasse while out on the forereef. And always lots of reef sharks.  You just never know what is going to swim by.

SMK: I think the most surprising result was how quickly corals would be eaten by corallivores if we removed the guard-crabs. The largest of these crabs is about two thumbnails across it’s carapace—but a pair is capable of repelling a Crown-of-thorns the size of a trashcan lid. When we were working on the study, the species of corals that these crabs inhabit was the only live coral left on the surface of the reef. The crabs are providing an essential service to their host. Even more shocking was that other species of coral were sheltering in the ‘lee’ of the mutualism. So the crabs were not just defending their coral, but creating a small refuge for other reef corals. 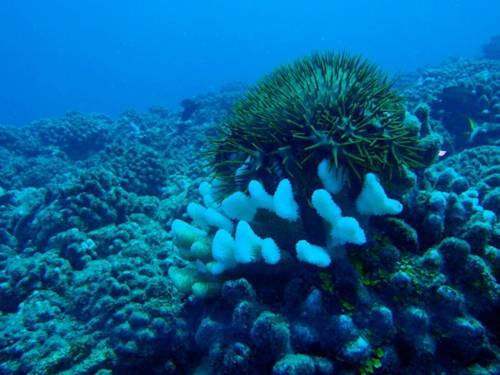 SMK: For me the study underlines the importance of biodiversity.  One species of guard-crab would not be successful in defending the corals from all of the corallivores. I hope that our study helps to illustrate that biodiversity is not just about a richness of color and form, but also of function.

SMK: My work on marine biodiversity continues, both with guard-crabs and other taxa. I’m working on the responses of marine animals to anthropogenic impacts, ranging from the tiny little animals that live between shells to petrels. I’m really excited about getting young people out and on the water to experience marine biodiversity first hand.

SMK: Steinbeck had a great quote about Darwin: “out of long, long consideration of the parts, he emerged with a sense of the whole”. If I had unlimited resources, I’d use them to help biodiversity scientists get back to observation—which is where most discovery in ecology comes from.

SMK: Open access to my research is important to me, and I’ve been waiting for a journal like PeerJ to come along!

SMK: For scientific publishing, it was painless.

We encourage you to check out some of our other Marine Biology publications in PeerJ. Join thousands of satisfied authors, and submit your next article to PeerJ. Don’t forget that in association with OA Week PeerJ is offering free publishing through the end of November.