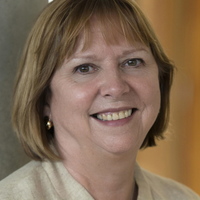 Wendy Hall, DBE, FRS, FREng, is Professor of Computer Science in Electronics and Computer Science, University of Southampton, and is a Director of the Web Science Institute. She was Head of the School of Electronics and Computer Science (ECS) from 2002 to 2007, and was Dean of the Faculty of Physical Sciences and Engineering from 2010 to 2014.
One of the first computer scientists to undertake serious research in multimedia and hypermedia, she has been at its forefront ever since. The influence of her work has been significant in many areas including digital libraries, the development of the Semantic Web, and the emerging research discipline of Web Science.
She is Managing Director of the Web Science Trust.
She became a Dame Commander of the British Empire in the 2009 UK New Year's Honours list, and was elected a Fellow of the Royal Society in June 2009.
She was elected President of the Association for Computing Machinery (ACM) in July 2008, and was the first person from outside North America to hold this position.
Until July 2008, she was Senior Vice President of the Royal Academy of Engineering, was a member of the UK Prime Minister's Council for Science and Technology, and was a founder member of the Scientific Council of the European Research Council. She was President of the British Computer Society from 2003 to 2004 and an EPSRC Senior Research Fellow from 1996 to 2002.

University of Southampton
Electronics and Computer Science
Her current research includes applications of the Semantic Web and exploring the interface between the life sciences and the physical sciences.