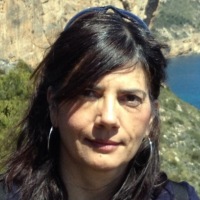 Maria V. Sanchez-Vives, MD, PhD is the ICREA Research Professor at the IDIBAPS (Institut d'Investigacions Biomediques August Pi i Sunyer) in Barcelona since 2008, where she is the head of the Systems Neuroscience group. She is currently co-director of the Event Lab (Experimental Virtual Environments in Neuroscience and Technology) and Associate Professor of the Department of Basic Psychology at the University of Barcelona. She is also the Spanish Society of Neurosciences, Program Committee, President.

Her independent research has been supported by national and international agencies. She has been funded by Human Frontier Science Program has been partner in five European Projects (FP6 and FP7). Her main interests include how neuronal and synaptic properties as well as connectivity determine the emergent activity generated by neuronal networks. Her group studies different aspects of spontaneous and induced neural activity: its regulating mechanisms, the information it encodes, and what can be learnt from the network function through the emerging patterns. This is studied from an experimental and computational approach.