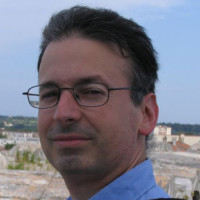 Michel Laurin has been a tenured CNRS (Centre National de la Recherche Scientifique) research scientist since 1998. His specialty is the evolution of vertebrates from the Devonian to the Triassic. His current interests include comparative methods and dating the tree of life, as well as other problems such as the invasion of land by vertebrates, the appearance of the tympanum (ear drum), and origin of extant amphibians. This work has introduced many innovations in paleontology and paleobiology, notably in the form of five computer programs, some of which can be used to perform paleontological dating of the tree of life or to analyze bone microanatomical data. He has supervised 5 doctoral students so far. He has led the team “Squelette des vertébrés” (which included eight tenured scientists, in addition a postdoc, a technician, and six doctoral students) for two years (2007–2008). He is a member of several scientific societies, and has served the ISPN (International Society for Phylogenetic Nomenclature) as both Secretary (two terms, including a current one) and President. He is currently President of the Association Paléontologique Française (APF). 50 journals and publishers regularly solicit reviews from him, and currently serves on seven editorial boards, including for the Journal of Evolutionary Biology. In January 2011, he became Chief editor of the Comptes Rendus Palevol.

Thanks for this correction, Michael. David, can you please send me the reviews?