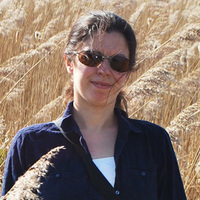 I attended the University of Illinois at Chicago, graduating with degrees in Biological Sciences and Earth and Environmental Sciences in 2004. I then completed my PhD in Palaeobiology (funded by a Gates Cambridge Scholarship) in the Department of Earth Sciences at the University of Cambridge in 2009, investigating anatomy and cranial biomechanics in early ornithischian dinosaurs.

As a postodcotoral scholar in the Department of Organismal Biology at the University of Chicago (2008 -2012) I used in vivo experimental methods and computer modeling to understand skull mechanics in crocodilians, lizards and primates. From 2012 - 2014, I was a Marie Curie Research Fellow based in the School of Earth Sciences at the University of Bristol exploring changes in morphology and function in the early tetrapod lower jaw across the water-land transition. From 2014 - 2017 I was a postdoctoral researcher in the Structure and Motion Laboratory of the Royal Veterinary College looking at the evolution of locomotion in amphibians, integrating data from in vivo and in vitro experiments, computer modelling and paleo-robotics. I briefly returned to Bristol as a Senior Research Associate (2017 - 2018) working on my own NERC-funded project.

I was appointed as a Lecturer in the Department of Cell and Developmental Biology at University College London (UCL) in Autumn 2018.