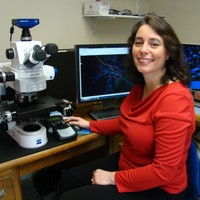 Karen Müller Smith obtained her B.S. in Cytogenetics from the University of Connecticut in 1996, graduating Magna Cum Laude as a University Scholar and Day of Pride Scholar. In 2003, she obtained her Ph.D. in Genetics from Tufts University Sackler School of Biomedical Sciences where she investigated the role of dopaminergic and norandrenergic genes in Attention Deficit Hyperactivity Disorder. Dr. Smith trained as a postdoctoral fellow in the Neurobiology of Childhood Neuropsychiatric Disorders at the Yale University Child Study center under a T32 NRSA fellowship, and was a awarded an James Hudson Brown-Alexander Brown Coxe Fellowship in 2005. Her studies elucidated the role of the Fibroblast Growth Factor 1 (Fgfr1) gene in glial cell translocation and axon guidance within the cortex, as well as its role in locomotor hyperactivity and inhibitory neuron number. In 2009 she was awarded the NARSAD Young Investigator Award, and a NIMH K01 Mentored Training Grant to study the role of astrocytic Fgf signaling in the postnatal development of cortical interneurons. In 2012, Dr. Smith became an Assistant Professor in Biology at the University of Louisiana at Lafayette. Dr. Smith continues to study Fgfr signaling in the CNS in addition to the neural basis of self injurious behavior.

Yale University
July 2003 - July 2012
Child Study Center, School of Medicine
I began as a Postdoctoral Research Fellow under the T32 training program working with Dr. Vaccarino, and eventually became an Associate Research Scientist in 2009. Here, I studied neurobiology and the role of Fgfr1 in midline glial cell development, Fgfr signaling in the dorsal ventricular zone radial glia, Fgfr signaling in cerebellar development, Fgfr1 in postnatal interneuron maturation and the effects of Fgfr1 loss upon behavior. Through these studies I gained expertise in the characterization of transgenic mouse models.