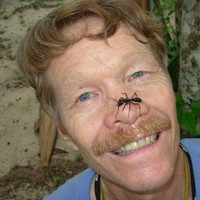 A childhood amongst the weeds, wild flowers, and insects profoundly affected Justin’s interest in and love of insects. High school and college interests in chemistry blended with interests in entomology ultimately steered him on the path to the chemical ecology and stings/venoms of wasps, ants and bees. His academic career carried him to the four corners of North America: beginning at Penn State University, then to University of British Columbia, on to University of Georgia, then to University of New Brunswick, and finally to Tucson AZ. He currently investigates the biology, medical importance, and impact of ants, bees, wasps, and kissing bugs on people at the Southwestern Biological Institute and University of Arizona. This work has resulted in more than 200 publications, 20 book chapters and invited reviews, three edited volumes, several hundred scientific presentations, the 2015 Ig Nobel Prize in Physiology and Entomology, and guest appearances on Jimmy Kimmel Live, NPR Science Friday, CBS Sunday Morning, NPR Morning Edition and a variety of magazines and papers, including the NY Times Weekend Magazine. He was quoted in the action movie Ant Man. His recently released and highly acclaimed book “The Sting of the Wild”, takes audiences from ages 5 to 105 on an insect safari adventure into the magical lives of stinging insects, the reasons why they sting, and how we all coexist.