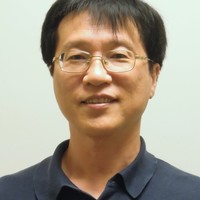 Professor Huan-Tsung Chang was born in Chung-Hua, Taiwan in 1962. He graduated from Iowa State University, USA in 1994 and became an associate professor and a professor in the Department of Chemistry, National Taiwan University, Taiwan in 1996 and 2001, respectively.

His research focuses on preparation of functional gold nanoparticles for control of enzyme activity and for the detection of metal ions, proteins, and DNA. A number of fluorescent gold, silver and copper nanomaterials have been synthesized and used for sensitive and selective for cell imaging and for the detection of various analytes, including anions, metal ions, proteins, and DNA. Carbon nanodots and fluorescent polymeric spheres have been synthesized and applied for cell imaging in his group. In addition, he has developed nanoparticle based mass spectrometry techniques for the detection of polysaccharides, proteins, small analytes, and DNA. His research interests also include surface enhanced Raman scattering, fuel cells, removal of contaminants using nanomaterials, and capillary electrophoresis.

Professor Chang is a Fellow of the Royal Society of Chemistry. He was awarded the Academic Achievement Award, Chinese Chemical Society in 2015, and the Prof. Rudolph A. Marcus Award 2017. He has been named a 2017 Highly Cited Researcher (Clarivate Analytics).