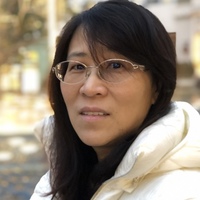 Professor Hsueh-Fen Juan received her BS and MS degrees in Botany and PhD in Biochemical Sciences from National Taiwan University (NTU) in 1999. She worked as a Research Scientist in the Japan International Research Center for Agricultural Sciences (Tsukuba, Japan) in 2000-2001 and as a Postdoctoral Research fellow in the Institute of Biological Chemistry, Academia Sinica (Taipei, Taiwan) in 2001-2002. She started her academic career in the Department of Chemical Engineering at NTU as an Assistant Professor, and in the Department of Computer Science and Information Engineering at NTU as an Adjunct Assistant Professor in 2002. She became Assistant Professor in the Department of Life Science and the Institute of Molecular and Cellular Biology at NTU. She became Associate Professor in 2006 and Full Professor in 2009 in the Department of Life Science, Institute of Molecular and Cellular Biology and Graduate Institute of Biomedical Electronics and Bioinformatics at NTU. Dr. Juan received several awards including Taiwan's Ten Outstanding Young Persons (2008), FY2011 JSPS Invitation Fellowship Program for Research in Japan (2011), K. T. Li Breakthrough Award by Institute of Information and Computing Machinery (2012), National Science Council (NSC) Award for Special Talents of the Colleges (2010-2015), NTU Academic Performance Reward (2015, 2016) and 2015 USA Emerging Information and Technology Association (EITA) Service Award.

Institute of Molecular and Cellular Biology, National Taiwan University
Department of Life Science
The main research in our lab integrates chemistry, biology and computational science to investigate the molecular mechanisms of apoptosis in drugs-induced cancer cells and discover novel drugs for cancer therapy.