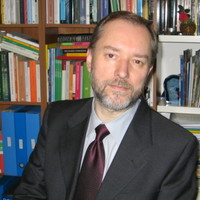 Giorgio Vallortigara is Professor of Professor of Cognitive Neuroscience and Director of the Centre for Mind/Brain Sciences at the University of Trento, Italy, and he has been an Adjunct Professor at the School of Biological, Biomedical and Molecular Sciences at the University of New England, Australia.
He is the author of over 250 scientific papers (with more than 11900 citations overall; h-index: 53 Scopus; 62 Google Scholar), most in the area of animal cognition and comparative neuroscience. He discovered the first evidence of functional brain asymmetry in the so-called “lower” vertebrate species (fish, amphibians); he also worked on comparative cognition, in particular on visual perception of biological motion, and spatial and number cognition. He served in the editorial boards of several cognitive science and neuroscience journals, he is co-editor of the journal “Laterality: Asymmetries of Brain, Body and Cognition” and has been the recipient of several awards.
His major research interest is the study of cognition in a comparative and evolutionary perspective, with particular reference to the mechanisms underlying the use of geometry in spatial navigation and the origins of number and object cognition in the animal brain. He also studied extensively the evolution of the asymmetry of the brain.

University of Trento
Centre for Mind-Brain Sciences
Spatial cognition in the avian brain and rodent brain. I am interested in the mechanisms underlying use of geometry in spatial navigation. I use domestic chicks, mice and rats as systems model and a combination of behavioural and neurobiological methods. Number cognition, using operant and imprinting techniques in frogs, some species of corvids, and domestic chicks. The research work involves investigation of both cardinal and ordinal aspects of number. We also plan to investigate intuitive notions of probability in animals (in chicks and non-human primates). Biological predisposition in recognition of animated objects. The research project involves investigation of phenomena such as biological motion perception and face-like stimuli recognition. We study newly-hatched chicks and human newborns using behavioural techniques and, respectively, immunohistochemistry and NIRS for investigation of the brain areas involved in the biological predispositions.