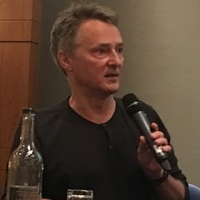 Prof. Chris Webster is Dean of the Faculty of Architecture, the University of Hong Kong, and leads the HKUrbanLab. He has degrees in urban planning, computer science, economics and economic geography and is a leading urban theorist and spatial economic modeller. He has published over 150 scholarly papers on the idea of spontaneous urban order and received over US$20M grants for research and teaching and learning projects.

He is a strong supporter of the discipline of Urban Science, believing that much (but by no means all) urban social science of the 20th century did not deliver on its claims and that advances in big data, sensing technology and computing power, are leading to a new engagement between urban decision makers and scientists. The 20th century urban scholars' reliance on small numbers, descriptive case studies, rudimentary analytics, cross-sectional designs and subjective measurements from social surveys are giving way to a more mature phase of urban science, with large-N panel studies, quasi and RCT designs, temporally and spatially fine-grained units of analysis, and a high degree of inter-disciplinarity. Professor Webster's hope is that an increasing number of Urban Science studies will appear in widely-read public science journals.

University of Hong Kong
May 2013
Faculty of Architecture