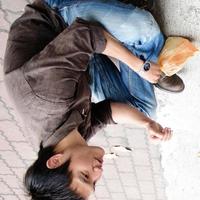 National Taiwan University
February 2018
Department of Life Science
There are two life-long projects of this lab: 1, To understand and explore the evolutionary history of marine mammals worldwide (especially on large whales, such as baleen whales – Mysticeti). Basically, the remains of fossil marine mammals only preserve bones, so part of the research would involve or use the skeletal specimens of extant species to discuss the morphological evolution. 2, To uncover the diversity of fossil vertebrates in Taiwan and its surrounding areas from different geological times (such as Miocene, Pliocene, and Pleistocene). Aim to fully reconstruct the evolutionary history or faunal succession of vertebrate diversity in Taiwan so that we could start to figure out the origin and timing of modern vertebrate diversity in Taiwan. In addition, apart from conducting the first-hand research, this lab would also as much as possible promote and disseminate the knowledge of related research by ceaselessly writing up the popular science articles, delivering public talks, and/or organizing exhibitions to introduce fossils and evolution of cetaceans (whales and dolphins) and other vertebrates.

University of Otago, New Zealand
May 2012 - August 2015
Geology
Pattern, process, and early radiation in baleen whale evolution: Late Oligocene Mysticeti from New Zealand. Baleen whales (Cetacea: Mysticeti) are the largest animals to have ever lived on Earth; thus, they play critical ecological roles and have important implications for understanding evolution. In this thesis, I consider their phylogenetic patterns and evolutionary processes based on extant mysticete species; describe three Oligocene mysticetes (26–28 Ma) from New Zealand; and discuss some problematic issues (ancestor-descendant relationships, emergence of the living baleen whales, and character selection in phylogeny) in baleen whale evolution. Developmental trajectories reveal that disparate heterochronic processes occur in different baleen whale lineages: paedomorphic neoteny in the pygmy right whales, Caperea marginata and peramorphic acceleration in balaenopterids (Balaenoptera borealis and Megaptera novaeangliae). Juvenile specimens as separate operational taxonomic units show that juvenile morphology would result in tantalising phylogenetic patterns: juvenile Caperea marginata is closely placed with its adult morphology whereas juvenile Balaenoptera borealis is distantly related to its adult morphology. †Horopeta umarere, †Whakakai koroke, and †Rikoriko horapa (all newly described and named in this thesis) from New Zealand have ecological and evolutionary significance. †Horopeta umarere represents the earliest gulp feeder; †Whakakai koroke indicates the diverse niches in Oligocene mysticetes; and †Rikoriko horapa is the oldest described baleen-bearing Mysticeti. Their phylogenetic placements are problematic but in turn show potential roles revealing the emergence of the crown Mysticeti. Phylogenetic tests propose the first example of ancestor-descendant relationships with implications of punctuated equilibrium in Mysticeti: Miocaperea pulchra is the direct ancestor of the extant pygmy right whale, Caperea marginata. Philosophical consideration of character selection based on empirical experiments suggests that more morphological characters are not necessary giving better phylogenetic resolution in terms of reconstructing baleen whale phylogeny. Overall, this thesis flourishes our understanding and knowledge of baleen whale evolution both on the empirical and theoretical bases. https://otago.ourarchive.ac.nz/handle/10523/5757