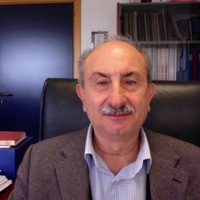 Prof. Alfonso Grassi graduated in Chemistry cum laude at the University “Federico II” of Naples (Italy); he moved later on to the University of Salerno (Italy) where he was appointed Assistant Professor (1983), Associate Professor (1991) and Full Professor (2002) in Inorganic Chemistry. The scientific interests have initially been in olefin polymerization catalyzed by group 4 metal complexes. Particular attention was devoted to the investigation of syndiospecific polymerization of styrene promoted by half-titanocene catalysts and stereospecific copolymerization of styrene with conjugated dienes. Structural characterization of crystalline polymers and organometallics was carried out using solution and solid state NMR techniques to design new metal catalysts and functional polymeric materials. To date the research group of Prof. Grassi is mainly interested in sustainable catalysis by metal nanoparticles and transition metal catalyzed copolymerization of CO2 and epoxides. Moreover controlled radical copolymerization of biosourced olefins and hydrocarbon monomers is currently under investigation to design new functional polymeric materials. The research activity was carried out in collaboration with international research teams and received financial support from public and private institutions. Prof. Grassi served in Salerno as Director of the Department of Chemistry (2002-2008) and deputy director of the Department of Chemistry and Biology (2015-…)