The Brontosaurus is Back – Author Interview

Today we are very pleased to publish “A specimen-level phylogenetic analysis and taxonomic revision of Diplodocidae (Dinosauria, Sauropoda)“. In this article, Emanuel Tschopp and colleagues report on the results of their groundbreaking research on Diplodocidae, research which shows (among other things) that Brontosaurus can now rightfully be reinstated as its own genus.

Emanuel comments on his research and experience publishing with us.

PJ: Can you tell us a bit about your team?

ET: We’re an international team of paleontologists. The main bulk of the analysis was performed by myself, a Swiss national during my PhD thesis at University Nova in Lisbon, Portugal.
The second author Octávio Mateus was my PhD supervisor. Roger Benson was added in the review phase of the article, because we wanted to check our earlier findings with a second, independent line of evidence, called pairwise dissimilarity, in which Benson is a leading expert. 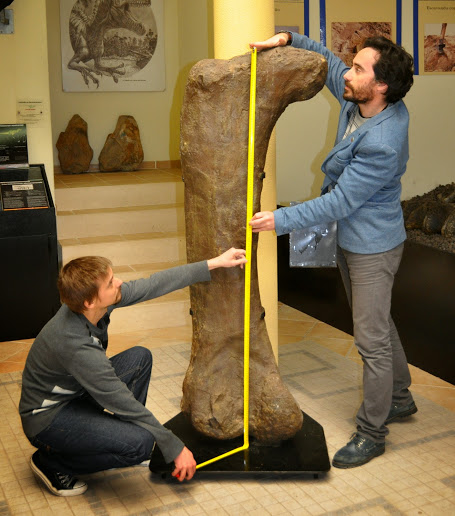 ET: During my PhD I gathered a large amount of very detailed data on bone anatomy in a dinosaur group called Diplodocidae, which are the iconic long­necked dinosaurs with the very long tail, which they used like a whip for defense. This detailed data on Diplodocidae allowed us to basically recreate their branch on the tree of life from scratch. This led us to three main findings: first, we found conclusive evidence for an additional, new genus within the group, which we call Galeamopus. Second, Supersaurus, a genus previously known from the USA alone, now also includes the Portuguese genus Dinheirosaurus. And finally, we found that differences between the genera Apatosaurus and Brontosaurus are numerous enough to revive Brontosaurus as its own genus, a name which has long been considered invalid in the scientific community. 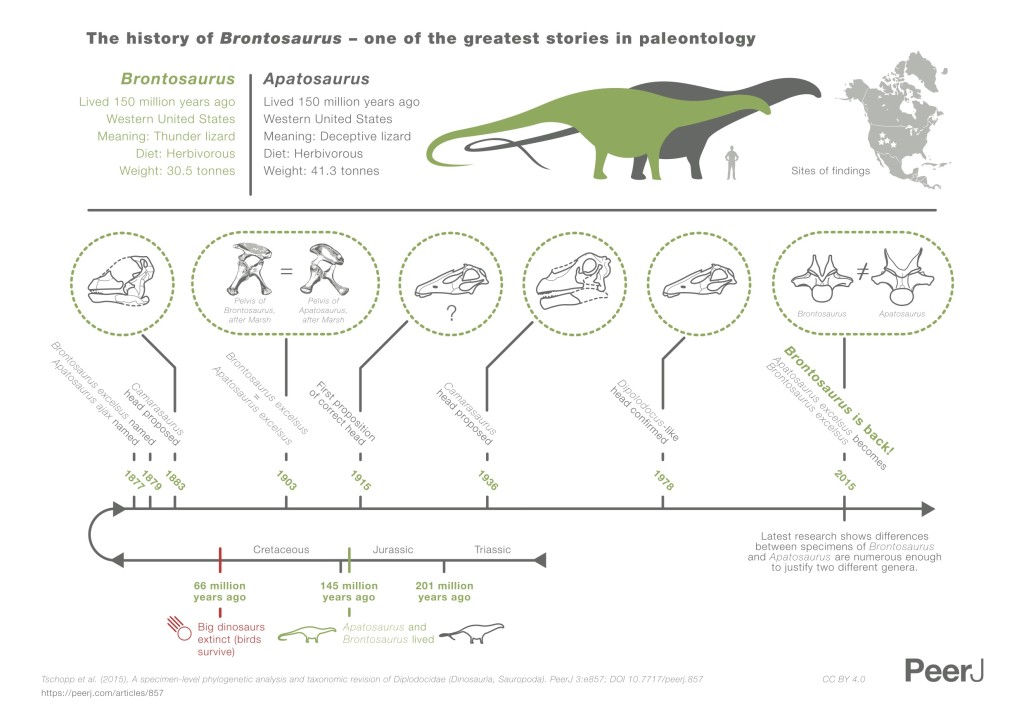 PJ: Can you provide some background on the history of Brontosaurus and your findings?

ET: Brontosaurus and many other genera in the group Diplodocidae were named in the late 1800s, very early in the history of paleontology. It was the time of the so­-called “Bone Wars” between the famous paleontologists Cope and Marsh. Their rivalry resulted in a large amount of species being named, because that’s one of the most prestigious things you can do in science. Since they were in such a rush to describe new species, many of them were based on fragmentary specimens, and are actually not directly comparable to each other. Obviously, this creates problems, and indeed, many of the species proposed by Cope and Marsh have later been shown to be the same as others, and therefore invalid. Of course, these tests can only be made once a number of more complete skeletons of the same group are found, which then allow indirect comparisons between the earlier, fragmentary specimens. Thanks to several new and relatively complete finds, we were now finally able to reassess the validity of all the species of Diplodocidae, and study their relationships in more detail then anybody else before. It’s only normal that such a study, also has some unexpected outcomes that overthrow years of research, like the resurrection of Brontosaurus.

PJ: How you do anticipate your findings will be received by the general public and your professional colleagues?

ET: I think the public will generally look favorably at the analysis, because it is a very detailed and extensive piece of work. There will always be details that some people might not like, and some researchers might also not be convinced about the statistical approaches we used to establish an objective border between species and genera, because usually it’s not being done the way we did it. Also, some people might be disappointed because we propose that their favorite dinosaur genus does not exist anymore (Dinheirosaurus), but others will be more than happy to hear that one of the most famous dinosaur genera of all times – Brontosaurus – is back. Probably, what people appreciate most, is that we tried to be as transparent and detailed as possible, providing all the data on which we base our interpretations and identifications. Like this, our study is easily reproducible, which is crucial in science.

PJ: What unexpected hurdles or challenges did you face when undergoing this research study?

ET: The biggest challenge in the analysis was to find a way to be consistent in deciding where to draw the line between species and genera. This touches fundamental questions such as scientific species concepts. In the end we opted for two statistical approaches that produce values for morphological distinctiveness. By doing so, we follow the idea already proposed by Darwin that new species were formed by the accumulation of new features. Therefore, species of the same genus have to be more different to each other than individuals from a single species, and less than different genera. This is pretty much the only approach we can use in paleontology, where we deal with extinct species. Unfortunately, we can’t test if a male from one population can have fertile offspring with a female from another population, to see if they belong to the same species…

ET: When applying the first of the two numerical approaches to the trees I got during my PhD studies, I was working my way up the various branches. I remember that I became more and more excited the closer I got to the branch that separated Apatosaurus and Brontosaurus. And then, indeed, evidence was clear: Brontosaurus wasn’t Apatosaurus after all. I couldn’t believe it at first. That’s why I asked Roger Benson to become part of it, and test the same with a second, different approach. But the result remained the same… 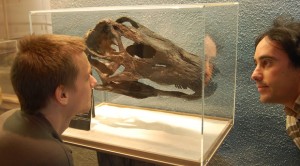 PJ: Why was it necessary to publish such an extensive research article?

ET: First, the analysis itself was very extensive; it is the largest phylogenetic analysis ever published about sauropods. The amount of detail that went into the analysis, and the amount of data that resulted from it was difficult to handle, and impossible to cut further down in a reasonable way. Second, some of the results we got will spark controversy, so it was crucial to provide all the details of our reasoning in order to explain very well what we did and why we did it this way. This also meant that we wanted to provide the primary data on the anatomy, with as many figures and tables as possible. We’re very happy that PeerJ allowed us to do this, and I’m also very happy that everything will be freely available online for everybody. We’re also setting an example here that I hope other researchers will follow.

PJ: What were the challenges you faced producing a journal article of this size?

ET: The main challenge was not to lose the overview of the entire article, to be able to structure it in a logical way without repeating ourselves too much, but also without having to refer the reader too much to different sections. This was one of the reasons why the article stayed so long in review – but it was worth the time, definitely.

ET: Don’t always trust previous identifications of fossils, it’s worthwhile and necessary to go back to the bones, to the actual specimens sometimes.

PJ: If you had unlimited resources (money, lab equipment, trained personnel, participants, etc.), what future study would you run to build upon your findings?

ET: There are two main interesting ways to continue this study: first it would be very interesting to check in detail the stratigraphy of the geological layers in which the specimens included in the analysis were found. With this, we could see where in time and space the first specimen of a species occurred, how long a species endured before it got extinct, how fast the species in this group evolved, and which species lived together in the same environment. Second, it would obviously be interesting to apply the same approach to more vertebrate groups, which is in fact what I am currently doing.

ET: I think I first read about PeerJ on the blog “Sauropod Vertebrate Picture of the Week”, which strongly promotes any new initiative in open access publishing. I liked the new approach of PeerJ right away and followed the development of the journal since its beginning. The possibility to publish extensive works without restrictions on color figures, tables, page numbers, and so on, for a reasonable price, was what convinced me to publish this study with PeerJ. I’m happy my co­-authors agreed with this choice.

ET: Usually as an author you have to contact the editor in case something does not work out in the process of submitting. When I started to submit our manuscript to PeerJ, and to upload all the numerous figures and tables, I got an email from PeerJ staff asking if they could help me with the upload, because they saw that it took a very long time (most probably because of the sheer load and my slow personal connection). So, basically PeerJ contacted me to solve problems I didn’t even realize I had. This for sure was a new experience for me!

ET: I got two types of comments: enthusiastic ones, because of the fact that all this data will be freely available, but I also got one comment saying that I was courageous, submitting such an important article to a yet un-indexed journal (Editor note: PeerJ is now indexed by the Web of Science and will receive an Impact Factor in June 2015) – especially at the early stage of research career that I am. However, I think PeerJ was the only reasonable solution to publish this paper without it being locked away for many people, and without having to cut it down considerably.

ET: I just wanted to thank a lot of people without which this paper would not have been possible. This obviously includes my co-­authors for their contribution, the two referees and the academic editor that checked this huge paper twice, and all the technical staff at PeerJ for their help and advice, in particular Peter Binfield, who always supported us in any way he could. I won’t even start to list the people and institutions that helped me during the research, but obviously these are mentioned in the acknowledgments of the paper. I hope you all enjoy the paper and will be able to use the provided data in the best way possible!

Join Emanuel and thousands of other satisfied authors, and submit your next article to PeerJ.